Pfizer Asks FDA To Approve COVID-19 Vaccine For Emergency Use

A few hours after one of China's top state-backed vaccine makers claimed that roughly one million Chinese have already received a COVID-19 vaccine under extremely broad emergency-use criteria, Pfizer has confirmed that it will be applying for emergency-use approval from the FDA on Friday, as was widely expected.
Once the FDA has approved the vaccine - a meeting for review has been scheduled for Dec. 8, 9 and 10 - Pfizer CEO Albert Bourla says the first doses of the vaccine could be shipped out within hours of the EUA approval.
During an interview on CNBC Friday morning, reporter Meg Tirrell explained that the FDA needs nearly two weeks to prepare all documents and data for review, which is why the committee tasked with approving the vaccine won't meet until Dec. 8. It's believed that both the Pfizer and the Moderna vaccines could receive EUAs during the meeting (Moderna says it expects to apply for its EUA in a week or so).

The first #covid19 vaccine is headed to FDA for review, from Pfizer & BioNTech. Moderna expected to follow. Potential advisory committee meetings Dec 8, 9, 10 - with possible EUA soon after. Your vaccines could be traveling w your holiday gifts this Dec (PFE using FedEx, UPS)

#COVID19 UPDATE: We will submit a request today to the @US_FDA for Emergency Use Authorization (EUA) of our mRNA vaccine candidate with @BioNTech_Group.

Pfizer says its timeline for approval could see the first doses shipped by the middle of next month.
A "green light" from the FDA would cap the fastest vaccine development program in history. Typically, it takes years for scientists to approve a vaccine. A large swath of the population, including the most vulnerable patients, could be vaccinated by early April, according to an estimated timeline parroted by analysts and government officials.
Pfizer's submission will mark the first time the agency has reviewed an mRNA vaccine, which relies on a revolutionary new technique which essentially reprograms the body's genes to produce antibodies that will fight off COVID. During its Phase 3 trial, the Pfizer-BioNTech vaccine was administered to 19,000 subjects, and at least two months of safety data were collected. 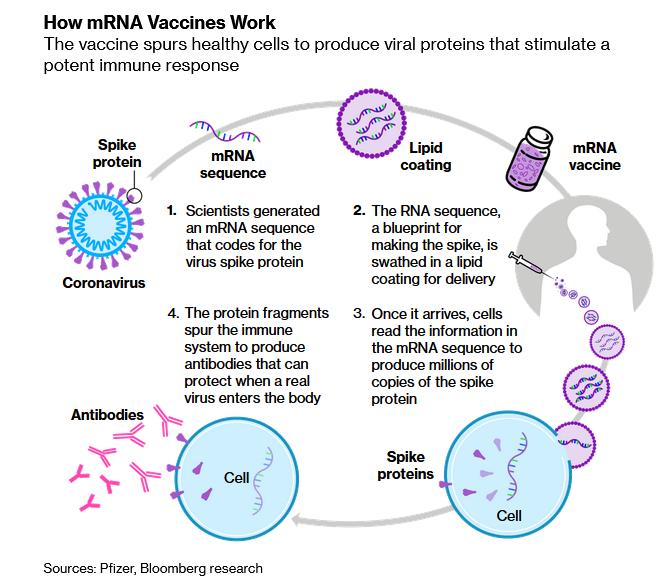 The nature of the FDA's approval is still not clear: The FDA could authorize the vaccine broadly for the US population, or limit it to a specific group such as the elderly or minorities. Pfizer's vaccine - which according to its "final" report is roughly 95% effective (up from 90% in the 'preliminary' data) - must be stored at -70 degrees Celsius, equivalent to -94 degrees Fahrenheit. Pfizer has created a special container to keep the shots cold during distribution. The US government has already agreed to pay Pfizer and BioNTech some $2 billion for 100 million doses of the vaccine, and the companies have struck similar deals with other companies.