Edward Snowden Is A Hero Who Deserves a Full Pardon 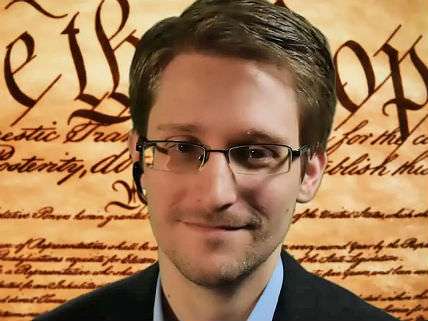 Edward Snowden Is A Hero Who Deserves a Full Pardon

The same actors who assure us Edward Snowden is a super-secret Russian and Chinese spy later told us that President Trump colluded with the Russians to win the 2016 election. By Jordan Schachtel
December 2, 2020
President Trump should issue a full pardon to Edward Snowden, the American whistleblower who tops the enemies list of the unaccountable anti-American actors in the U.S. intelligence community, otherwise known as the Deep State.
In a series of monumental leaks, Snowden exposed that the Obama administration had been using the supposed authority of the post-9/11 Patriot Act to continue and advance a massive, indiscriminate, unconstitutional data collection program that swept up the communications of millions and millions of Americans and foreigners abroad, using U.S. and global telecommunications infrastructure.
Prior to Snowden’s disclosures, top officials in the U.S. intelligence community, such as former National Security Agency Director Keith Alexander and former Director of National Intelligence James Clapper, explicitly lied to Congress about the existence of these programs. Americans had no idea that their phone conversations, text messages, emails, and other forms of communications were being swept up by their own government and stored indefinitely.
According to reports, the intel chiefs’ series of lies, and the growing sophistication of the data collection program, motivated Snowden to steal classified evidence of the program and flee the United States so he could give the information to reporters.
“We are building the greatest weapon for oppression in the history of man, yet its directors exempt themselves from accountability,” Snowden wrote in an impassioned email to journalist Laura Poitras. “NSA director Keith Alexander lied to congress, which I can prove.”

Snowden’s detractors—which, before the Trump presidency, included yours truly—make the case that Snowden could have used legal whistleblower protections to disclose the information internally about the data collection programs. Unfortunately, after witnessing the actions of hostile actors in our unaccountable intelligence community over the last four years, I don’t think there’s any way Snowden would have been able to expose the program through a system that relies on our bureaucracy and congressional oversight for protections.
As we’ve seen, only whistleblowers of a certain political persuasion, such as Alexander Vindman, seem to be provided protections. Others, such as Adam Lovinger, are simply thrown to the wolves and never heard from again. Members of Congress have expressed concern about reports of retaliation against whistleblowers.
It’s important to remember that at the time of Snowden’s escape, both parties in Congress were overwhelmingly in favor of the post 9/11 “national security” apparatus surveiling Americans. U.S. intelligence agencies and contractors operated with virtually zero real oversight. The idea that Snowden would have been offered protections from the powers that make up the D.C. security state uniparty coalition is a laughable notion.

Snowden Did the Best He Could With What He Had

Yes, Snowden is far from perfect. He’s a human being. Like all of us, he’s a complicated figure. Snowden’s history reveals a civil libertarian-minded, somewhat anti-social outcast who struggled to fit in. He has his struggles and personality flaws, but also redeeming qualities and some impressive accomplishments. Most importantly, his mixed resume is free of any criminal foreign associations. Unlike, say, famous traitors like Robert Hanssen or Ana Montes, any talk of foreign involvement in his past is completely unsubstantiated.
What Snowden did was both just and necessary. It’s easy for us to review his plan of action and nitpick at how he went about things. There is no perfectly clean way to expose enormously important secrets to the American people.
Snowden claims he took the precautions necessary to not allow for his information to fall into the hands of adversaries, such as the Chinese and Russian intelligence agencies. Can we be certain that is the case? Not at all. Do we have conclusive evidence that Snowden’s cache of information made its way to our enemies? No, we don’t.
After Snowden’s initial leaks hit the press, we were lied to again. The U.S. government claimed it was only sweeping up metadata that did not look at the content of communications but only basic information about the parties involved in conversations and the duration of the exchange of information. This turned out to be another falsehood.
Through its surveillance programs, the government had access to not only the metadata, but the content of emails, the entirety of phone conversations, Google search history, and a variety of other intrusive data collection measures. The system Snowden exposed was capable of tracking virtually everything individuals were doing online or through telecoms networks. No warrant required.
Shortly after Snowden went to Hong Kong, the U.S. government charged Snowden under the Espionage Act, which is for Americans suspected of betraying their country to advance the interests of a foreign power. By labeling Snowden a foreign spy, the government was seeking to delegitimize his authenticity as a whistleblower.
Snowden detractors claim his arrival in Russia is evidence that he was seeking to betray our nation. This could not be further from the truth. When Snowden arrived in Moscow, the U.S. government revoked his passport, leaving him in international limbo.
WikiLeaks, which had arranged for his escape from Hong Kong, had planned on bringing Snowden elsewhere. Julian Assange, the founder of WikiLeaks, has publicly stated that he intended to bring Snowden to Venezuela, Ecuador, Iceland, Nicaragua, or another handful of nations, prior to the U.S. government eliminating his passport.
Unfortunately, Snowden had very few transit options that did not involve being forcibly extradited back home. Moreover, given his Espionage Act charge, Snowden and his legal team have decided he should remain in Russia, as he has more than enough reason to believe he would not be given a fair trial upon his return to the United States. A presidential pardon would certainly change that calculation.

The Deep State Has No Credibility Any More

Prior to the Trump presidency, I was willing and naive enough to give the government the benefit of the doubt that they had information to back up such enormous claims against Snowden. However, after witnessing what elements of our intelligence agencies have attempted to do to the likes of President Trump, Lt. Gen. Michael Flynn, and a variety of other “enemies” of the deep state, I will no longer allow “trust us, he’s guilty” to justify government action ever again.
To date, no evidence has ever surfaced proving that Snowden worked with a foreign power to commit espionage against the United States. It has been more than seven years since Snowden was charged with committing espionage, and the government has never delivered the goods on the charges against him.
If the government had information that Snowden intended on betraying his country, they would have revealed it by now. The same actors who assure us Snowden is a super-secret Russian and Chinese spy later told us that President Trump and Flynn colluded with the Russians to win the 2016 election.
Snowden humiliated the deep state, and the deep state responded by playing dirty in baselessly labeling him a traitor to America. Snowden is no traitor. He’s an American hero who risked everything to disclose ongoing, illegal surveillance on U.S. citizens. Snowden deserves a pardon.
Jordan Schachtel is an investigative journalist and foreign policy analyst based in Washington, D.C.