Start Jailing Lawmakers Who Break Their Own COVID Rules 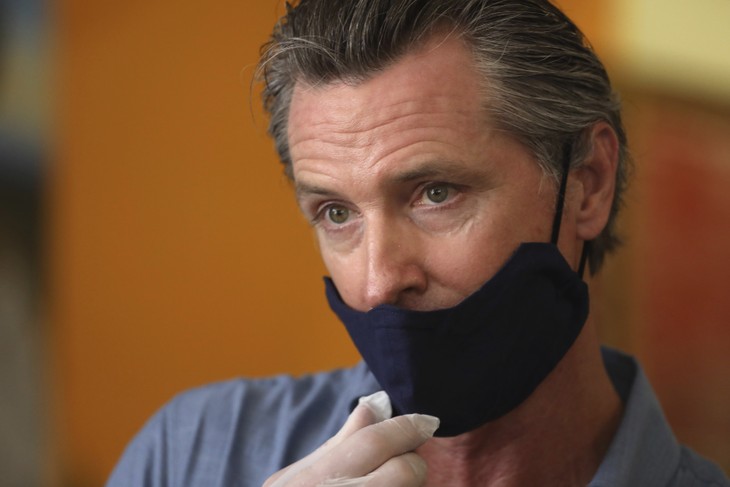 Genaro Molina/Los Angeles Times via AP, Pool
Jail ‘Em All
Happy Wednesday, good Kruiser Morning Briefing friends. Grooming is once again optional.
We are about to head into another commie COVID curfew period here in my little fishing village of Tucson, Arizona. The state hasn’t imposed anything, but Regina Romero — our pathetic ditz mayor — is a prog/commie and has been itching to flex her petty tyrant muscles.
Curfews are all the new rage in the various Tyrantvilles around these United States, despite the fact that there is none of the vaunted “SCIENCE!” we’re supposed to be listening to that indicates this will help. At best, a few drunk people might avoid passing it to each other via an after-hours parking lot make-out session. At worst — and far more likely — more restaurants and bars will go under for good.
But public health and safety or something.
My commie Democrat mayor is something of an anomaly these days: she hasn’t been caught flouting the COVID restrictions handed down by the government.
Yet.
As we are all now well aware, there are more than a few who have. California Gov. Gavin Newsom’s mask-free mini-superspreader event at the pricey French Laundry is the most infamous of these recent transgressions.
In New York, Gov. Andrew “Fredo the Elder” Cuomo told the good citizens of his state to avoid traveling to see their families for Thanksgiving or having their families travel to see them. After a few days of his finger-wagging, it was discovered that he was going to bring in his 89-year-old mother for Turkey Day. Mrs. Cuomo is one of the few elderly people in New York who wasn’t sent by her son to die in a nursing home. It pays to be connected.
Another Thanksgiving related “rules for thee but not for me” incident involved Denver’s mayor, Michael Hancock. After passing along his version of the “stay at home to save lives” message, Hancock jumped on a plane and flew to Mississippi to see his daughter.
California gave us two more “Let them eat cake” moments, one involving Los Angeles County Supervisor Sheila Kuehl, and the other San Jose Mayor Sam Liccardo.
Most of the politicians getting caught are Democrats. I say “most” simply to cover my rear end.
These are just some of the ones who have been caught. I don’t doubt for a moment that many more have broken the rules but decided to be stealthier about it. It’s only the uber-arrogant politicians like Gavin Newsom who don’t bother to avoid being found out.
There’s a good reason for that: Newsom and company know that they won’t be held accountable for anything. They merely need to issue an insincere, apologetic press statement and then they can get back to playing dictator again. Heck, in Cuomo’s case he didn’t even have to apologize. He’s the governor with the highest body count in the country and he’s getting a freakin’ award.
Maybe it’s time they did have to face the music.
This is another one of those crazy fantasies of mine, but by now you all know that a lot of those have merit. In fact, it might be a good idea just to let me be a scorched-earth mad king for a while.
Just putting that out there.
Imagine the pure, poetic justice of seeing Newsom, Cuomo, and some of the other Hitler youth (stole that from Animal House) cooling their heels in a holding cell after being caught with their masks off and their pants down.
Democrats keep doing bad things because we keep letting them get away with them. There still hasn’t been anybody held accountable for the Russian collusion lie. That was four years of subterfuge and mendacity that, thus far, hasn’t seen a real negative consequence yet.
So fire up the paddy wagon and start rounding up these scofflaw hypocrites. Throw them in the hoosegow. And keep calling it a hoosegow just to be irritating.
Arise, citizens, and let us rid ourselves of these tyrannical bonds.
Or get together for a beer.
After curfew.
It’s Not Politics So Yes, Let’s
via Start Jailing Lawmakers Who Break Their Own COVID Rules

» Food Lines Grow Miles Long as Politicians Break Rules to Dine at Fancy Restaurants, Take Vacations
» The CDC is Being Called Out for Covid-19 ‘Statistical Manipulation’ as Lawmakers Press for Grand Jury Investigation
» The Science Behind COVID Rules
» COVID Psychological Stress Being Applied to Break Resistance to Vaccine
» COVID RULES OR SO-CALLED MANDATES ARE NOT LAWS!!