General Flynn, QAnon & The US Elections

2020 VISION: General Flynn, QAnon & The US Elections – By Thierry Meyssan

General Flynn, QAnon and the US Elections
by Thierry Meyssan
The pardon granted by President Trump to his former National Security Advisor, General Michael Flynn, appears to be in support of QAnon; a group he feels is connected to. Similarly, the removal of leaders from the Pentagon appears to follow General Flynn’s objectives.

Donald Trump’s brilliant granting of a presidential pardon to General Michael Flynn has caused a stir.
Certainly, this great military man is being prosecuted for lying to Russiagate investigators (and not for other crimes he himself is alleged to have committed). He was trying to protect his boss from the intrusions of the judiciary; for which the latter thanks him today. 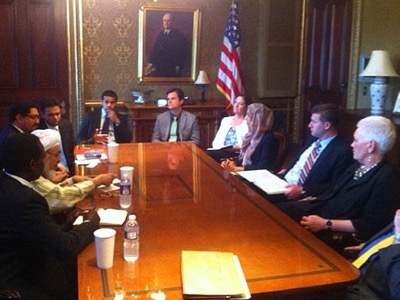 He then began a career in the private sector by working for Cambridge Analytica, the firm that analyzed Internet traffic mega-data to help the electoral campaigns of many current leaders, including Ted Cruz [1] and then Donald Trump in the United States. Then, he created with his son, Michael Jr, a lobbying company, of which Turkey was a client. He pleaded for it in favor of the extradition of Fetuhllah Gülen, accused of fomenting the coup d’état of 2016. At the time, President Recep Tayyip Erdogan was not yet the protector of the Muslim Brotherhood and hesitated to become the leader of Turkish nationalism. It was therefore desirable to extradite the Islamist leader who had implemented the coup on the orders of the CIA.
In the end, General Flynn got closer to Donald Trump, became so involved in his campaign against the Puritans that he was selected as a possible vice-president, even Secretary of Defense or National Security Advisor. It is this last position that he would occupy for 24 days during the inauguration of President Trump until his forced resignation by the Russiagate investigation.
Since that date, he kept a low profile, exclusively occupied with his judicial defense. 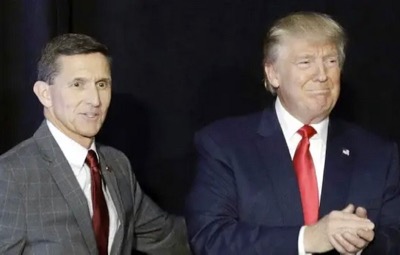 General Flynn and President Trump
Hence the question: what was this master spy doing so close to Donald Trump?
On September 14, 2019, he was announced as a speaker, along with George Papadopoulos, at a conference on “Soldiers of the Digital Age” in Atlanta. This was the first public manifestation of the QAnon movement. But in the face of press interest, he cancelled his participation.
The conference was organized by Richard Granville, the founder of the Yippy search engine. But we know precisely nothing about QAnon. Just that by this signature, it is posing as a senior defense functionary with “Q” level secrecy and that it intends to remain Anonymous. Messages that have been widely relayed attribute to it the task of investigating a pedophile ring within the puritanical upper middle class, in the continuity of Pizzagate, including many personalities from Hollywood and the Democratic Party, including the Podesta brothers
.

John Podesta served as White House Secretary under President Bill Clinton and as Hillary Clinton’s campaign manager. In the middle of Russiagate, he implicated the Voltaire Network as a Kremlin front after Michael Flynn Jr. relayed one of my articles revealing his father’s plan to reform US Intelligence [2].
Prior to the November 3 presidential election, “Q” broadcast messages warning of an impending operation against conspirators who would rig the election. Since then, it has revealed the search in Germany of the premises of the Dominion group involved in the U.S. election counts. However, while this police intervention did take place, it is not possible to verify who ordered it, nor why, much less what was found.
Donald Trump’s personal attorney and former mayor of New York City, Rudy Giuliani, spoke of several forms of election rigging: voter registration, the ballot boxes themselves, mail-in ballots, automatic ballot counts, and the transmission of machine results. This is where Dominion’s software would come in. It would count fewer votes for Donald Trump and more for Biden on a pro rata basis. It is believed to have been used in several countries to rig elections, including Venezuela.
President Hugo Chávez, it so happens, has often requested election observers from the Voltaire Network. One of them had discovered in advance and denounced a rigging of the ballot. The country was using electoral machines that issued a receipt for each vote. Dominion had established in advance a list of its voting machines that should be checked, comparing electronic results with receipts. From that point on, it was known that the other machines could be tampered with without risk. It is not President Chávez who wanted to falsify the results, but the Dominion company, on behalf of who knows who. The general who had organized the elections had been arrested beforehand for corruption and high treason. 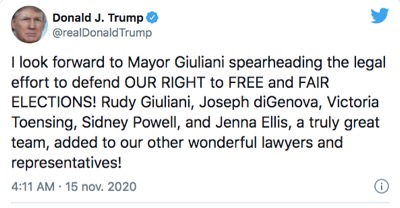 General Flynn’s lawyer, Sidney Powell, joined Rudy Giuilani’s team at a press conference. A former federal prosecutor in North Carolina, she has made a name for herself against the mob and corruption. As a lawyer, she demonstrated the abusive nature of the Flynn investigation and had it quashed. She has just announced with Giuilani that she is finishing a new complaint against Dominion for massive fraud.
The dismissal of five of the Pentagon’s top leaders [3] bears General Flynn’s signature: all of them were involved in supporting the Secret Muslim Brotherhood and their terrorist organizations, al-Qaeda and Daesh.
Is Donald Trump bluffing or is he catching the fraudsters red-handed? If so, will he fight them or negotiate with them?
Thierry Meyssan – Political consultant, President-founder of the Réseau Voltaire (Voltaire Network). Latest work in English – Before Our Very Eyes, Fake Wars and Big Lies: From 9/11 to Donald Trump, Progressive Press, 2019
General Flynn, QAnon and the US Elections, by Thierry Meyssan (voltairenet.org)