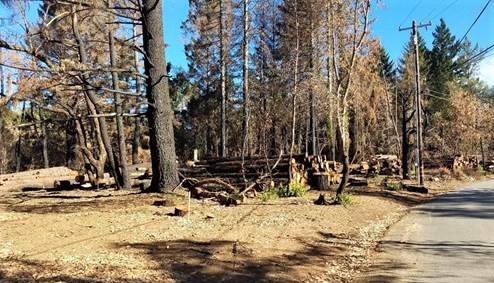 PG&E and three of its contractors face million in potential fines after Cal Fire and the California Coastal Commission say they heavily logged private property in the Santa Cruz Mountains after the CZU Lightning Fire, often without telling landowners, and without obtaining required permits. Trees here were left behind on Vick Drive in Bonny Doon in this Nov. 16, 2020 photo. (Photo: Cal Fire)
By Paul Rogers | Bay Area News Group
December 5, 2020 at 1:00 p.m.
PG&E is facing fines that could total millions of dollars from Cal Fire and the California Coastal Commission — along with possible criminal penalties — for what those agencies say is overzealous logging and grading work the utility has been doing without permits in the Santa Cruz Mountains following the CZU Lighting Fire.
After the devastating fire, which was fully contained Sept. 22, the utility and its contractors aggressively cut hundreds of large trees, including redwoods, Douglas firs, madrones, cypress and ponderosa pines up to 100 feet away from power lines in communities near Boulder Creek, Ben Lomond and Bonny Doon, according to the agencies.
Much of the logging occurred on private property without notifying the landowners, investigators say. Some people lost their homes or were evacuated, only to return to find massive piles of logs left on their property where their trees once stood, debris which could cost them thousands of dollars to haul away.
Moreover, PG&E, which denies wrongdoing, and its contractors also conducted heavy equipment work on steep dirt roads, Cal Fire officials say, without completing proper erosion control. As a result, some of the dirt roads already have experienced significant erosion after a rainstorm Nov. 17, and the erosion increases the danger of potentially deadly mudslides in the burned areas during rains later this winter.

“There are questions about the trees that have been cut and whether or not they had the authority and whether or not it was necessary,” said Cal Fire Division Chief Angela Bernheisel. “Also, not preparing the work areas for the winter to prevent erosion. We’re very concerned there’s a lot of risk out there as a result of the fire, and this just adds to it.”
Since Oct. 30, Cal Fire has issued four letters of violation to PG&E and three of its contractors, outlining more than 300 violations of state laws. Each violation carries penalties of up to $10,000. Meanwhile, on Nov. 20, the California Coastal Commission also hit PG&E with a notice of violation, saying six miles of the 17-mile area where it has been working are in the state’s coastal zone. And next Tuesday, the Santa Cruz County Board of Supervisors, which called the work “egregious and reckless” in a staff report, is scheduled to vote on a recommendation to send the case to the Santa Cruz County district attorney for possible criminal charges.
“We understand PG&E’s need to remove trees for wildfire prevention and clean-up,” said Santa Cruz County Supervisor Bruce McPherson, “but that is not all they did up in our mountains. PG&E and its contractors left behind debris and neglected erosion protection, which increased the potential that already existed for dangerous debris flows. We owe it to our community to hold PG&E accountable for making the post-fire landscape worse in many ways and also for violating the private property rights of some landowners.”
PG&E says it did nothing wrong. The utility says it does not need a state timber harvest permit for the work, as Cal Fire asserts, and that it is only trying to reduce future fire risk by removing trees around power lines.
“PG&E’s most important responsibility is the safety of our customers and communities,” said PG&E spokeswoman Mayra Tostado. “We are working safely and as quickly as possible in areas impacted by the CZU Lightning Fire to identify and address hazardous trees that may have been damaged by the fire.”

After PG&E received the violation notice from the Coastal Commission, citing an undisclosed number of Coastal Act violations that can bring penalties of $30,000 each, it stopped work in those areas. But it plans to continue working across the other 11 miles until “early 2021,” Tostado said, in parts of Boulder Creek, Ben Lomond and Bonny Doon.

Erosion on a dirt road off Empire Grade Road near Ben Lomond on Nov. 19, 2020, following work by PG&E crews after the CZU Lightning Fire. The utility and its contractors face millions in fines from Cal Fire and the Coastal Commission for what the agencies say are violations of state timber and environmental laws. (Photo: Cal Fire)
The CZU Lighting Fire was the worst fire in the Santa Cruz Mountains since 1904. It began with lightning strikes in remote forested areas near Davenport and the San Mateo-Santa Cruz County line, and eventually burned 86,509 acres. One person was killed, and 1,490 buildings were destroyed. The fire also burned 97% of Big Basin Redwoods State Park, destroying its headquarters, visitor center, campgrounds and ranger homes, although many of the charred old-growth redwoods are already re-sprouting new green growth and are expected to recover.
PG&E’s power lines have caused numerous fires across California in recent years. The utility has spent billions settling lawsuits and has been forced by judges and the state Public Utilities Commission to more thoroughly cut back vegetation from its power lines. But state law requires vegetation be cut back between 4 and 10 feet, depending on the voltage. Some Santa Cruz Mountains residents have wondered whether the utility may have attempted to take advantage of the post-fire conditions, aggressively cutting back more trees than normal to reduce the risk for decades.
Nancy Anderson, a Bonny Doon resident, returned to her home on Robles Drive after the fire to find her huge madrones, Douglas firs and oak trees chopped down and in piles. An arborist had said after the fire that they were alive, she told KSBW TV in an interview last month.
“The only thing that was alive on the top half of my property — completely gone,” she said, choking back tears. “No one spoke to us. No one asked us. They just took them.”