An international team of experimental physicists from the University of Queensland and Nokia Bell Labs has generated time reversed optical waves with a device capable of independently controlling all of light’s classical degrees of freedom simultaneously. 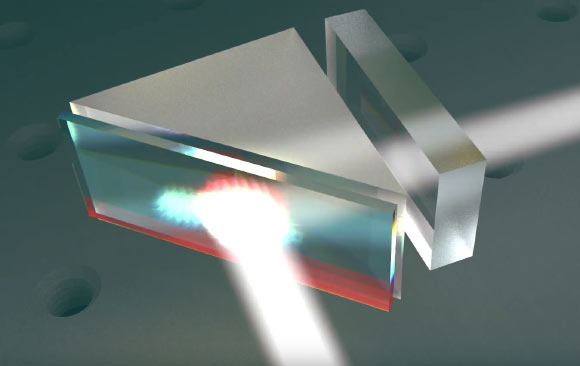 Mounaix et al. develop a new technique to demonstrate the time reversal of optical waves, which could transform the fields of advanced biomedical imaging and telecommunications. Imager credit: Mounaix et al.
Time reversal of waves in physics doesn’t mean traveling back to the future; it describes a special type of wave which can retrace a path backwards through an object, as if watching a movie of the traveling wave, played in reverse.
“Imagine launching a short pulse of light from a tiny spot through some scattering material, like fog,” said lead author Dr. Mickael Mounaix, a researcher in the School of Information Technology and Electrical Engineering at the University of Queensland.
“The light starts at a single location in space and at a single point in time but becomes scattered as it travels through the fog and arrives on the other side at many different locations at many different times.”
“We have found a way to precisely measure where all that scattered light arrives and at what times, then create a ‘backwards’ version of that light, and send it back through the fog.”
“This new time reversed light wave will retrace the original scattering process like watching a movie in reverse — finally arriving at the source just as it began: a single position at a single point in time.”

The backwards version of the light beam, known as the time reversed wave, is a random-looking 3D object, like a little cloud of light.
“To create that light cloud, you need to take an initial ball of light flying into the system, and then sculpt it into the 3D structure you want,” said senior author Dr. Joel Carpenter, also from the School of Information Technology and Electrical Engineering at the University of Queensland.
“That sculpting needs to take place on time scales of trillionths of a second, so that’s too fast to sculpt using any moving parts or electrical signals — think of it like shooting a ball of clay at high speed through a static apparatus with no moving parts, which slices up the ball, diverts the pieces, and then recombines the pieces to produce an output sculpture, all as the clay flies through without ever slowing down.”
“There was no device that could fully control and shape a light beam in 3D before the team developed this technique,” said co-author Dr. Nick Fontaine, a researcher at Nokia Bell Labs.
“It’s very important to control light delivery as accurately as possible for many applications, ranging from imaging to trapping objects with light, to creating very intense laser beams.”
The findings were published in the journal Nature Communications.
_____
M. Mounaix et al. 2020. Time reversed optical waves by arbitrary vector spatiotemporal field generation. Nat Commun 11, 5813; doi: 10.1038/s41467-020-19601-3