OUT OF MIND » BREAKING NEWS & HOT TOPICS » THE GREAT DIE OFF » Texas hospital botches vaccine PR stunt as nurse jabbed with EMPTY SYRINGE, but liberals say pointing it out is ‘anti-vax’

Texas hospital botches vaccine PR stunt as nurse jabbed with EMPTY SYRINGE, but liberals say pointing it out is ‘anti-vax’ 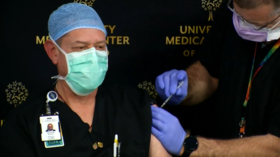 A video of the publicity stunt captured by local channel KFOX14 shows a medical worker fruitlessly pressing on the syringe as he realizes it's empty.

An El Paso, Texas, hospital tried to promote Covid-19 vaccination by turning its first doses into a media event, but the publicity stunt backfired when one of the nurses being inoculated was apparently stuck with an empty syringe.
Video of Tuesday’s vaccinations of five nurses at University Medical Center of El Paso showed the second nurse being jabbed with a needle, but the plunger won’t go down because it’s already at the bottom of the syringe.

The video circulated on social media on Thursday, but rather than focusing on the embarrassing blunder, some observers suggested that posting the footage was an attack meant to diminish public confidence in vaccines.

You're a professional but don't know when you have an empty syringe? Allegedly, this is the first COVID-19 vaccinations at UMC this week. 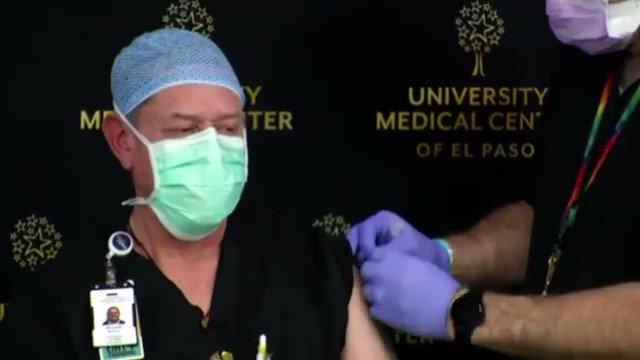 For instance, when independent journalist Tim Pool tweeted the video on Thursday, Democrat strategist Nate Lerner said, “It’s really weird how anti-vaccine you are. You’ve been hanging out with Alex Jones too much, my guy.”

Another Democrat commenter also smelled an anti-vaxxer rat. “A mistake that probably happened because of the media attention,” he said of the botched shot. “The real question is, what are you trying to accomplish with this tweet? Furthering distrust in institutions that function great while still being susceptible to the occasional bit of human error?”

The hospital issued a statement on Wednesday afternoon, saying the nurse in question was inoculated [i]“again” to “remove any doubt raised that he was not fully vaccinated and further strengthen confidence in the vaccination process.”
[/i]

[i]University Medical Center, the first hospital in its region to receive the Covid-19 vaccine developed by Pfizer and BioNTech, implied that the scene with the apparently empty syringe was legitimate. It said that [i]“re-vaccinating the nurse will not cause adverse effects.” [/i][/i]
Twitter users mocked the public-relations blunder. “We must demand higher-quality propaganda,” one observer said.

OUT OF MIND » BREAKING NEWS & HOT TOPICS » THE GREAT DIE OFF » Texas hospital botches vaccine PR stunt as nurse jabbed with EMPTY SYRINGE, but liberals say pointing it out is ‘anti-vax’