By Henry Taylor, University of Birmingham and Bilge Sayim, Université de Lille
How much are you conscious of right now? Are you conscious of just the words in the centre of your visual field or all the words surrounding it? We tend to assume that our visual consciousness gives us a rich and detailed picture of the entire scene in front of us. The truth is very different, as our discovery of a visual illusion, published in Psychological Science, shows.
To illustrate how limited the information in our visual field is, get a deck of playing cards. Pick a spot on the wall in front of you and stare at it. Then take a card at random. Without looking at its front, hold it far out to your left with a straight arm, until it’s on the very edge of your visual field. Keep staring at the point on the wall and flip the card round so it’s facing you.
Try to guess its colour. You will probably find it extremely difficult. Now slowly move the card closer to the centre of your vision, while keeping your arm straight. Pay close attention to the point at which you can identify its colour.
It’s amazing how central the card needs to be before you’re able to do this, let alone identify its suit or value. What this little experiment shows is how undetailed (and often inaccurate) our conscious vision is, especially outside the centre of our visual field.

Crowding: how the brain gets confused

Here is another example that brings us a little closer to how these phenomena are investigated scientifically. Please focus your eyes on the + sign on the left, and try to identify the letter on the right of it (of course you know already what it is, but pretend for the moment that you do not):

In this case, you’ll probably struggle to identify the letters. It probably looks like a mess of features to you. Or maybe you feel like you can see a jumble of curves and lines, without being able to say precisely what’s there. This is called “crowding”. Our visual system sometimes does OK at identifying objects in our peripheral vision, but when those objects are placed near other objects, it struggles. This is a shocking limitation on our conscious vision. The letters are clearly presented right in front of us. But still our conscious mind gets confused.
Crowding is a hotly debated topic in philosophy, psychology and neuroscience. We’re still not sure why crowding happens. One popular theory is that it’s a failure of what’s called “feature integration”. To understand feature integration, we will need to pick apart some of the jobs that your visual system does.
Imagine you are looking at a blue square and a red circle. Your visual system does not just have to detect the properties out there (blueness, redness, circularity, squareness). It also has to work out which property belongs to which object. This might not seem like a complicated task to us. However, in the visual brain, this is no trivial matter.
It takes a lot of complicated computation to work out that circularity and redness are properties of one object at the same location. The visual system needs to “glue” together the circularity and the redness as both belonging to the same object, and do the same with blueness and squareness. This gluing process is feature integration. 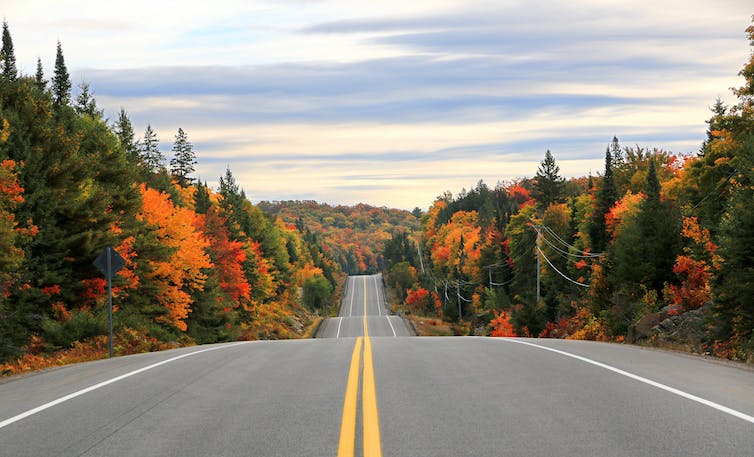 How much of the periphery do we perceive? Inga Locmele/Shutterstock

According to this theory, what happens in crowding is that the visual system detects the properties out there, but it can’t work out which properties belong to which object. As a result, what you see is a big mess of features, and your conscious mind cannot differentiate one letter from the others.

Recently, we have discovered a new visual illusion that has raised a host of new questions for fans of crowding. We tested what happens when three of the objects are identical, for example in the following case:

What do you see when you look at the +? We found that more than half of people said that there were only two letters there, rather than three. Indeed, follow-up work seems to indicate that they’re pretty confident about this incorrect judgment.
This is a surprising result. Unlike normal crowding, it’s not that you see a jumble of features. Rather, one whole letter neatly drops away from consciousness. This result fits poorly with the feature integration theory. It’s not that the visual system is detecting all of the properties out there, but just getting confused about which properties belong to which objects. Rather, one whole object has just disappeared.
We don’t think that a failure of feature integration is what’s going on. Our theory is that this illusion is due to what we call “redundancy masking”. In our view, the visual system can detect that there are several of the same letter out there, but it doesn’t seem to calculate correctly how many there are. Maybe it’s just not worth the energy to work out the number of letters with high precision.
When we open our eyes, we effortlessly get a conscious picture of our environment. However, the underlying processes that go into creating this picture are anything but effortless. Illusions like redundancy masking help us unpick how these processes work, and ultimately will help us explain consciousness itself.

Henry Taylor, Birmingham Fellow in Philosophy, University of Birmingham and Bilge Sayim, Research Scientist in Psychology, Université de Lille
This article is republished from The Conversation under a Creative Commons license. Read the original article.
Top image: The brain is a mystery. Orla/Shutterstock