OUT OF MIND » BREAKING NEWS & HOT TOPICS » THE GREAT DIE OFF » Travel From U.K. Shut Down As Nations Assess Threat Of New Coronavirus Strain

Travel From U.K. Shut Down As Nations Assess Threat Of New Coronavirus Strain 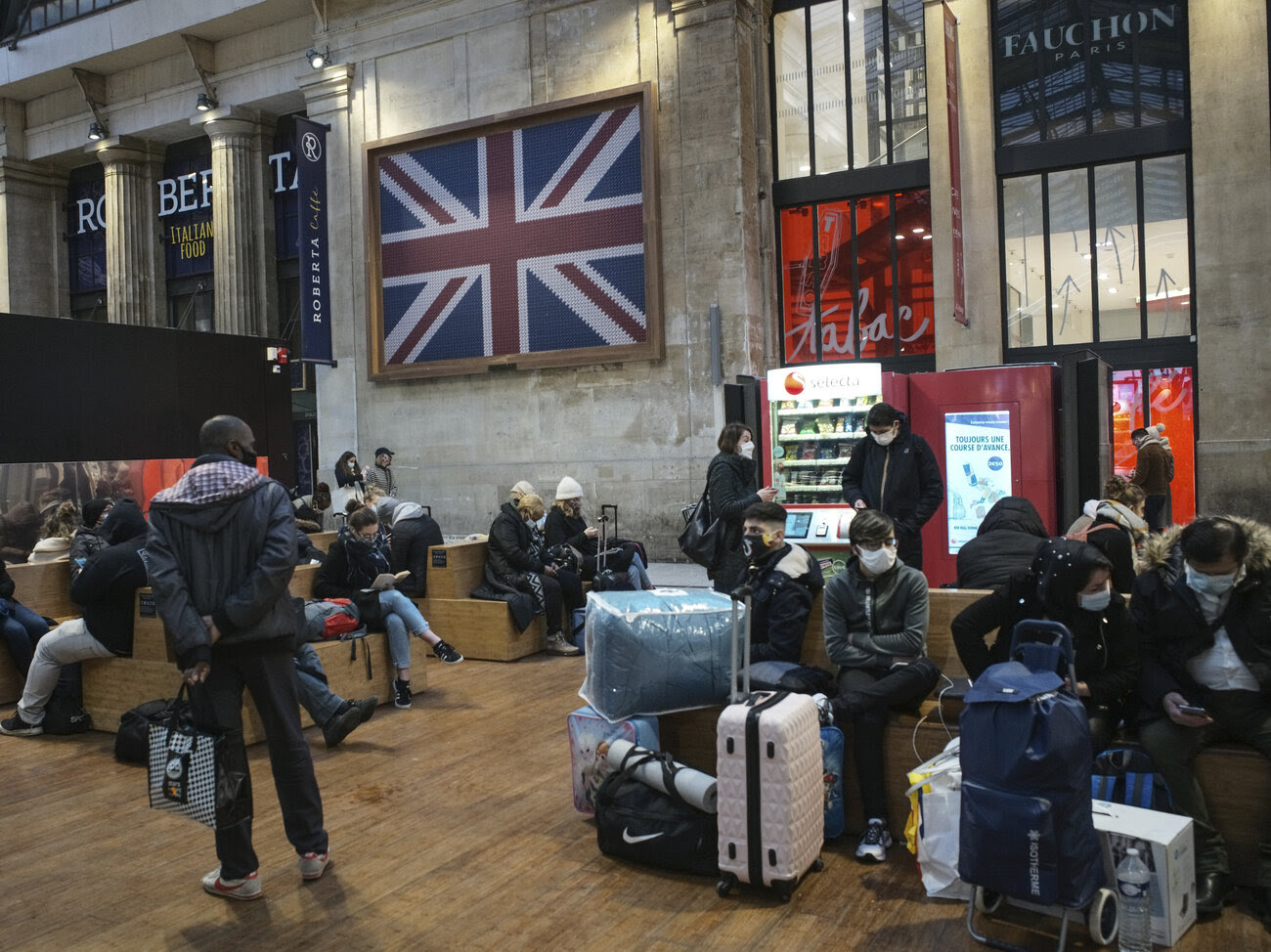 Passengers wearing face masks wait next to the Eurostar Terminal at Gare du Nord train station in Paris on Monday. France is banning all travel from the U.K. for 48 hours in an attempt to make sure that a new strain of the coronavirus in Britain doesn’t reach its shores.Lewis Joly/AP
Updated 2:30 p.m. ET
British Prime Minister Boris Johnson Monday attempted to reassure skittish European neighbors that his government had the threat of a new strain of the coronavirus under control.
In a press conference at No. 10 Downing St., Johnson also said he was in talks with France, one of several nations which have banned entry from the U.K. since the weekend, causing chaos for travelers and cargo shipments.
Johnson said he and the president of France, Emmanuel Macron, had “a very good call” earlier in the day, adding that both leaders want to find a way to resume freight traffic between the two nations.
“It was an excellent conversation with the French president,” Johnson said. “He stressed he was keen…to sort it out in the next few hours, if we can.”
This comes as a growing number of countries are barring travelers fromthe United Kingdom as a way to preemptively block the spread of a new strain of the coronavirus that is sweeping through southeast England.Article continues after sponsor messagehttps://fa985e93a7429269049adf8d7d548903.safeframe.googlesyndication.com/safeframe/1-0-37/html/container.html
U.K. officials warn the new variant of the virus could be as high as 70% more contagious than the various strains already circulating. However, there’s no evidence, so far, suggesting the new variant is more deadly.
France announced it was suspending all travel from that county for 48 hours beginning Sunday at midnight.
The new restrictions on U.K. travel have crippledfreight transport across the English Channel. Trucks loaded with cargo were backed up for miles trying to get into and out of Britain, while many travelers have been left stranded at airports and train stations across Europe.
Countries in Europe including Belgium, Bulgaria, Germany, Italy and the Netherlands, announced bans on travelers from the U.K.
Canada also announced it was suspending flights from the U.K. for a 72-hour period, while Israel announced the entry of non-Israeli citizens from the U.K. has been prohibited “including those who have already been issued permits.”
“We in the U.K. fully understand the anxieties of our friends about COVID, their anxieties about the new variant,” Johnson said. “But it’s also true that we believe the risks of transmission by a solitary driver, sitting alone … are really very low.”
NPR’s Frank Langfitt reporting from London on Monday explained the island nation’s predicament on NPR’s Morning Edition this way: “It feels much more isolated than it did just a few days ago here on the island of Great Britain.”
He also noted that the Brexit transition period, which ends Dec. 31, only complicates matters.
“The Eurotunnel, which also runs under the channel, is also closed. It seems to be a precautionary measure for about 48 hours,” Langfitt said. “There’s a lot of concern around the Christmas season. We’ve already seen backups at the Port of Dover 20 miles long. And what’s been happening is people are trying to get freight across the channel before the deadline of the Brexit transition period, which is going to end on New Year’s Eve.” Freight trucks are parked on the M20 near Folkestone in Kent as part of Operation Stack after the Port of Dover was closed and access to the Eurotunnel terminal suspended. There are concerns over a highly contagious new variant of the coronavirus, which led several nations to suspend travel and shipments from the U.K.Steve Parsons/AP
The Associated Press reports that there are fears the travel restrictions could result in food shortages if they are not eased in the near future.
For his part Johnson tried to quell those worries. He pointed out that the travel ban at the Port of Dover only applied to people driving freight trucks and not to shipping containers, which Johnson said accounted for roughly 20% of the volume of goods at the port.
“Which means the vast majority of food, medicines and other supplies are coming and going as normal,” Johnson said.
All of this comes on the same day the European Medicines Agency, followed within hours by the European Commission, authorized the use of the COVID-19 vaccine jointly developed by BioNTech and Pfizer. The U.K. has already approved its use.
Earlier on Monday, Frances’s Minister Delegate for Transport Jean-Baptiste Djebbari said in a tweet it was his hope “a solid health protocol” could be established so movement could recommence.
“In the next few hours, at European level, we’re going to establish a solid health protocol to ensure that movement from the UK can resume. Our priority: to protect our nationals and our fellow citizens,” Djebbari said.https://platform.twitter.com/embed/index.html?dnt=false&embedId=twitter-widget-0&frame=false&hideCard=false&hideThread=false&id=1340964850839810049⟨=en&origin=https%3A%2F%2Fwww.npr.org%2Fsections%2Fcoronavirus-live-updates%2F2020%2F12%2F21%2F948751745%2Ftravel-from-the-u-k-shut-down-as-nations-assess-threat-of-new-coronavirus-strain&siteScreenName=NPR&theme=light&widgetsVersion=ed20a2b%3A1601588405575&width=550px
The BBC, which reports more than 40 nations have imposed some sort of restriction on the U.K., adds there’s also a push in Brussels, where the European Union is headquartered, for a more coordinated response to the new variant of the virus and how many of the nations respond to it.
The British broadcaster notes that when the coronavirus first began to spread earlier this year, a number of EU member states enacted an “every-country-for-itself” model, which it said put strains on the entire concept of European cooperation.

While EU nations consider how to respond to the latest crisis in the coronavirus pandemic, the British government placed many parts of the country into what is known as a “Tier 4” lockdown over the weekend.
Under those restrictions, British officials urge those under Tier 4 should refrain from interacting with anyone outside their immediate household during the Christmas holiday.
In a bit of good news on the vaccine front, Johnson said more than half a million U.K. citizens had received their first dosage of the coronavirus vaccine.

OUT OF MIND » BREAKING NEWS & HOT TOPICS » THE GREAT DIE OFF » Travel From U.K. Shut Down As Nations Assess Threat Of New Coronavirus Strain