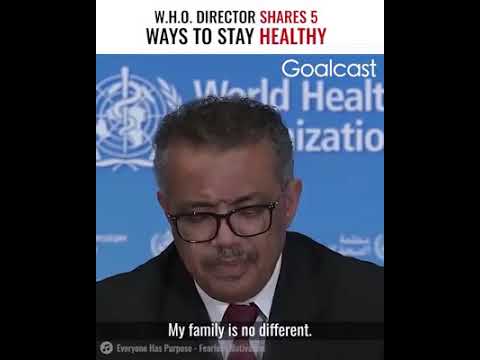 WHO Director Tedros Adhanom Ghebreyesus vasilis asvestas / Shutterstock.com
By Patrick Delaney
LifeSiteNews is facing increasing censorship. Click HERE to sign up to receive emails when we add to our video library.
GENEVA, Switzerland, December 23, 2020 (LifeSiteNews) — The World Health Organization (WHO) has updated its definition of “herd immunity,” redefining the term as something only achievable when the “vast majority of a population are vaccinated.”
It was recently discovered that the WHO changed this definition, suppressing the fact that immunity happens as a natural process in populations as individuals are infected and develop immunity to a particular virus.  Such “herd immunity” can, potentially, be assisted by a vaccine but is not dependent upon it.
The WHO definition prior to the change stated:

Herd immunity is the indirect protection from an infectious disease that happens when a population is immune either through vaccination or immunity developed through previous infection. This means that even people who haven’t been infected, or in whom an infection hasn’t triggered an immune response, they are protected because people around them who are immune can act as buffers between them and an infected person [emphasis added].

The WHO’s new definition is largely drawn from a speech delivered in October by the organization’s Director General Tedros Adhanom Ghebreyesus.  It suppresses the fact that herd immunity is achieved by natural means and narrows the concept as to apply only to the process of vaccination, suggesting that protection from COVID-19 can’t happen without mass vaccination. It states:

‘Herd immunity’, also known as ‘population immunity’, is a concept used for vaccination, in which a population can be protected from a certain virus if a threshold of vaccination is reached.
Herd immunity is achieved by protecting people from a virus, not by exposing them to it…
With herd immunity, the vast majority of a population are vaccinated, lowering the overall amount of virus able to spread in the whole population.

But Stanford epidemiologist and co-author of The Great Barrington Declaration, Dr. Jay Bhattacharya, has stated that the World Health Organization’s (WHO) new definition of “herd immunity” does not rightly define the biological reality.
Bhattacharya told LifeSiteNews, “The revised definition of herd immunity’ at the WHO site is not actually a definition of herd immunity.  It provides a nice description of how vaccines can protect people against infections and makes a sensible, but obvious, point that we should not intentionally infect anyone with a disease.”
However, he clarifies, “[h]erd immunity describes the situation when – because of both natural immunity and vaccine-induced immunity – every new person infected with an infectious disease will pass the infection on to an average of one person or fewer. At that point, the number of infected people will tend to shrink.” This, he states, is “the end point of many epidemics, and will be the end point of this COVID-19 epidemic.”
Finally, he affirms, “The WHO attempting to alter the definition will not change that basic biological fact.”
Also commenting on the WHO’s new definition was Dr. Michael Yeadon, a former vice president and chief scientist for Pfizer pharmaceutical. In a Monday tweet presenting the new definition, the British national calls it a “lot of chuff” which is “factually wrong in numerous ways.”

Later in its presentation on the topic, the WHO states that “The vast majority of people in most countries remain susceptible to this virus. Seroprevalence surveys suggest that in most countries, less than 10% of the population have been infected with COVID-19.”
In an earlier analysis of these questions, Yeadon called such a presumption of 100% initial susceptibility to the COVID-19 virus “ridiculous because while SARS-CoV-2 is indeed novel, coronaviruses are not.”
He pointed out that there are at least “four, endemic, common-cold inducing coronaviruses … [which] circulate freely in UK and elsewhere.” Those who have been infected by “one or more of these endemic, common-cold producing coronaviruses in the past, have a long-lived and robust [T-cell] immunity, not only to those viruses, but to closely related viruses. SARS-CoV-2 is one such closely-related virus.”
“To not expect such cross-over is … to demonstrate the lack of the requisite understanding” for being effective in mitigating harms due to an epidemic, he wrote.
Thus, drawing from the scientific data, Dr. Yeadon concluded that due to previous exposure to common-cold coronaviruses, “a significant proportion (30%) of the population went into 2020 armed with T-cells capable of defending them against SARS-CoV-2, even though they had never seen the virus,” and that public health authorities are “naively wrong to assume ‘everyone was susceptible’.”
In addition to these 30%, Yeadon also demonstrates that concluding a “less than 10%” infection rate of the population, based on seroprevalence surveys, “is a gross and amateur underestimate,” since “not every person, infected by a respiratory virus, goes on to produce antibodies” and that is what these surveys measure.
Drawing from two independent methods, which arrive at the same general conclusion, Yeadon demonstrates that the real infection rate is “in the mid-20s to low-30’s per cent,” and thus WHO’s estimate “less than 10%” is “a gross and amateur underestimate.”
Thus, combining these figures together, and considering one can add 10% for some young children who are “resistant,” one arrives at the conclusion that 65 to 72% of the population is currently immune to COVID-19, achieving, Yeadon says, herd immunity.
“Accordingly,” Yeadon concludes, societies “should immediately be permitted to get back to normal life.”
LifeSiteNews has produced an extensive COVID-19 vaccines resources page. View it here.