OUT OF MIND » THE INSANITY OF REALITY » POISON PLANET » GEOENGINEERING: Bill Gates Plan to ‘Dim the Sun’ Quietly Moves Forward

Source: Niamh Harris
Lockdown fanatic Bill Gates is quietly moving forward with his diabolical plan to dim our sun, according to reports.
The controversial plan is allegedly part of an effort to save the human race by “revitalizing our environment” by artificially dimming the sun’s rays.
This sounds like something out of a dystopian sci-fi movie, but unfortunately for us it’s real life.
Westernjournal.com reports: According to Reuters, a Harvard University project plans to test out a controversial theory that global warming can be stopped by spraying particles into the atmosphere that would reflect the sun’s rays.
The project represents one of the most controversial aspects of what’s known as “geoengineering” — the idea that, to tackle issues like climate change, massive aspects of our ecosystem can be played with or changed. In this case, it would involve reflecting some of the sun’s rays to stop them from reaching Earth.
“Open-air research into spraying tiny, sun-reflecting particles into the stratosphere, to offset global warming, has been stalled for years by controversies – including that it could discourage needed cuts in greenhouse gas emissions,” Reuters reported.
“In a small step, the Swedish Space Corporation agreed this week to help Harvard researchers launch a balloon near the Arctic town of Kiruna next June. It would carry a gondola with 600 kg of scientific equipment 20 km (12 miles) high.”
The Harvard team, whose project is known as SCoPEx, is funded in large part by Gates, according to an August report in the U.K. Daily Mail. (Which gave the subject the wordy title: “Could dimming the sun save the Earth? Bill Gates wants to spray millions of tonnes of dust into the stratosphere to stop global warming… but critics fear it could trigger calamity”)
The journal Nature was less judgmental.
“The idea is simple: spray a bunch of particles into the stratosphere, and they will cool the planet by reflecting some of the Sun’s rays back into space. Scientists have already witnessed the principle in action,” Nature already reported in 2018. (Headline: “First sun-dimming experiment will test a way to cool Earth”)
“When Mount Pinatubo erupted in the Philippines in 1991, it injected an estimated 20 million tonnes of sulfur dioxide into the stratosphere — the atmospheric layer that stretches from about 10 to 50 kilometres above Earth’s surface. The eruption created a haze of sulfate particles that cooled the planet by around 0.5 °C. For about 18 months, Earth’s average temperature returned to what it was before the arrival of the steam engine.”
There are several problems with this plan, not the least of which is that we don’t know what the unintended consequences might be. But to environmentalists, the problem is that it doesn’t solve global warming the way they want to do it.
“There is no merit in this test except to enable the next step. You can’t test the trigger of a bomb and say ‘This can’t possibly do any harm,’” said Niclas Hällström, director of the Sweden-based environmentalist think-tank WhatNext?
And while Hällström is worried about some of the same things that other people are — the potential to change rain patterns or crop yields — he’s also concerned that people aren’t concerned enough about the solution he wants, which is a transition to a zero-carbon society.
“Swedish society is increasingly calling for real, immediate solutions to climate change,” he said.
Right.
He’s not the only one, either.
“This is as much an experiment in changing social norms and crossing a line as it is a science experiment,” said Jim Thomas, co-executive director of Canadian-based environmentalist organization ETC Group, which opposes the idea.
But then again, Gates lives in this dream world where his advice on pandemics and global warming is given equal weight as his time developing Windows.
When it comes to the pandemic, Gates has said that he expects businesses and restaurants to remain shuttered for some time:

.@BillGates on Covid: "Even through 2022” we should be prepared for life to not return to “normal” Says “sadly" it’s "appropriate” for bars and restaurants to close over the next "four to six months" 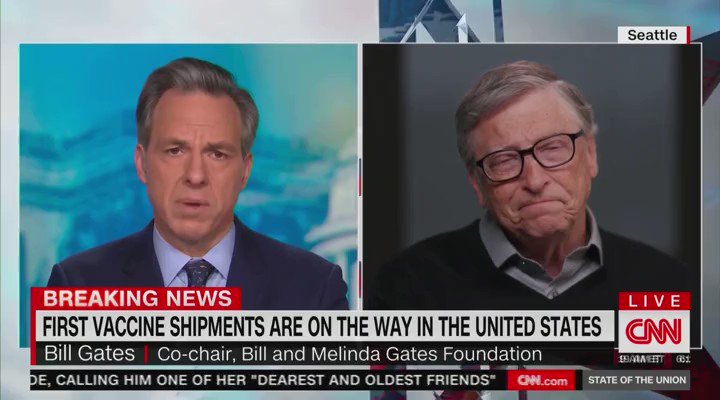 “Bars and restaurants — in most of the country — will be closed as we go into this wave, and I think, sadly, that’s appropriate,” he said during an interview with CNN’s Jake Tapper in an interview earlier this month.
“The next four to six months really call on us to do our best, because we can see that this will end and you don’t want somebody that you love to be the last to die of coronavirus.”
He’s also called out fellow billionaire Elon Musk for his statements questioning the science behind mask-wearing.
“Elon’s positioning is to maintain a high level of outrageous comments,” Gates said in a July CNBC interview.
“He’s not much involved in vaccines. He makes a great electric car. And his rockets work well. So he’s allowed to say these things. I hope that he doesn’t confuse areas he’s not involved in too much.”
However, when it came to outrageous comments, keep in mind that in that same interview, Gates said that when it came to the coronavirus, “China did a lot of things right at the beginning, like any country where a virus first shows up. They can look back and say they missed some things.”
Again. Right.
In short, Bill Gates doesn’t have a particularly great handle on COVID, much less the current vaccine process. He panders to China. His work on the vaccine has been desultory at best. And now, what he wants us all to believe is that he’s got a handle on everything — including blotting out the sun to make the world cooler.
Get the economics on business-killing lockdowns together, Bill. Then we’ll see about your geoengineering gambit.

OUT OF MIND » THE INSANITY OF REALITY » POISON PLANET » GEOENGINEERING: Bill Gates Plan to ‘Dim the Sun’ Quietly Moves Forward