OUT OF MIND » CONSPIRACY THEORIES & ENDURING MYSTERIES » CONSPIRACY & FALSE FLAG EVENTS: PAST & PRESENT » Nashville Police Officer Says God Told Him to Walk Away from RV Moments before it Exploded

Nashville Police Officer Says God Told Him to Walk Away from RV Moments before it Exploded Wed Dec 30, 2020 1:58 pm 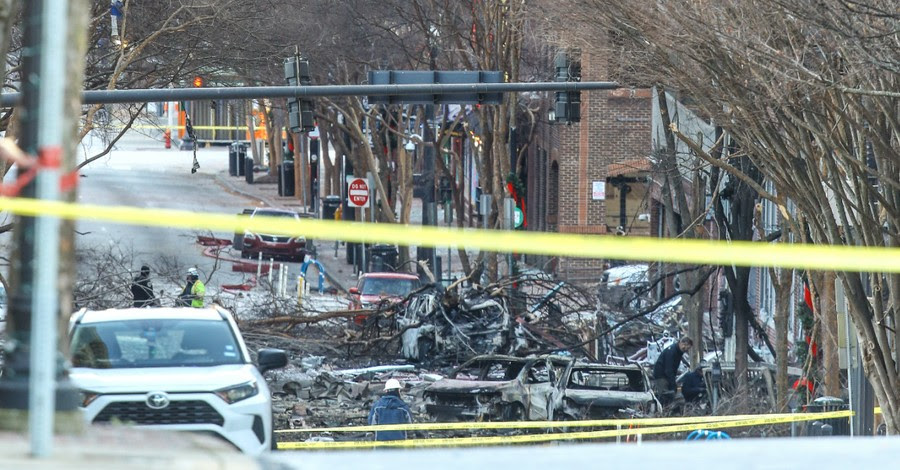 Source: Milton Quintanilla | Contributor for ChristianHeadlines.com
A Nashville police officer is praising God for saving his life after a massive explosion took place from a recreational vehicle on Christmas Day.
According to Yahoo News, Metropolitan Nashville Police Officers James Wells and Amanda Topping were close to completing their shifts on early Christmas morning when fellow officer Tyler Luellen, requested backup for a possible shooting in downtown Nashville.
Upon arriving at the scene, both officers heard audio from an RV that told occupants of nearby buildings to evacuate because there was a bomb in the vehicle that was about to explode. The vehicle also played the 1964 hit song “Downtown” by Petula Clark before exploding.
Topping, who was inside her car, grew antsy as people from inside a building near the RV began to evacuate. During a Sunday press conference, Wells, who describes himself as a “spiritual person” explained how God told him at the last minute to move away from the vehicle before the blast.
“This might not be politically correct, but this is my truth,” Wells said, according to CBS News. “I literally heard God tell me to turn around and go check on Topping, who was by herself down on Broadway.”
As soon as the bomb detonated, Wells noted that he lost his footing and temporarily lost his hearing. But he soon got up and ran towards Topping, who had started walking towards Wells before seeing “the biggest flames” in her life.
“I don’t know how I kept my footing, but … I couldn’t see him for a second,” Topping explained. “I just lost it, and I just took off in a sprint towards him. And, like he said, I’ve never grabbed somebody so hard in my life.”
Wells praised God for saving his life, otherwise he would not be alive to celebrate Christmas with his wife and children.
“I’m not going to shy away from that, because that’s what saved my life,” he asserted. “That’s what got me to see my kids and my wife on Christmas. And ‘good to see you’ has a completely different meaning for me now.”
On Saturday, federal agents searched the home of suspect Anthony Quinn Warner, 63, after Google street view images showed an RV parked in Warner’s backyard. Police explained that the description of the vehicle matched the one from the explosion.
Police Chief John Drake noted that human tissue was found following the blast and that authorities were examining it to see if it was human remains.
On Sunday, Donald Q. Cochran, the U.S. attorney for the Middle District of Tennessee, confirmed that Warner was the bomber.
Warner “was present when the bomb went off, and he perished in the bombing,” Cochran noted.
According to investigators, Warner acted alone but did not understand his motives for the blast, which injured three people and destroyed 41 businesses and other buildings close by.
Photo courtesy:

OUT OF MIND » CONSPIRACY THEORIES & ENDURING MYSTERIES » CONSPIRACY & FALSE FLAG EVENTS: PAST & PRESENT » Nashville Police Officer Says God Told Him to Walk Away from RV Moments before it Exploded