https://www.mlive.com/weather/2021/01/sudden-stratospheric-warming-underway-what-this-means-for-michigan-great-lakes-region.html
Updated Jan 05, 9:48 PM; Posted Jan 05, 2:38 PMFacebook ShareTwitter Share701sharesBy Mark Torregrossa | mtorregr@mlive.com
The highest part of the weather atmosphere is undergoing some big changes right now. Researchers find that these changes occurring high up in the air eventually transfer to a weather pattern realignment here at the ground.
The second part of Earth’s atmosphere is called the stratosphere. It lies on top of the troposphere, which is where most of our weather occurs. Currently, a Sudden Stratospheric Warming (SSW) is underway.https://34ec3bea956cc15f888dc918e8d381f3.safeframe.googlesyndication.com/safeframe/1-0-37/html/container.html
The stratosphere is around 100,000 feet above the ground. Usually in winter there is a swirling vortex centered over the north pole, with the vortex up in the stratosphere. This is the vortex that most researchers call the Polar Vortex. On Dec. 25, the temperature average in this vortex started to warm. Since then, the temperature around 100,000 feet has warmed 54 degrees Fahrenheit. While this might be what you would think defines a SSW, there’s actually another weather feature researchers key on.
Michael Ventrice, Ph.D, and IBM meteorologist, says the real key indicator is when the swirling winds of the stratospheric vortex slow down and reverse direction. Ventrice originally studied tropical meteorology and how atmospheric waves over other parts of the globe affect hurricanes in the Atlantic. Ventrice was in grad school for meteorology in 2012 and says Sudden Stratospheric Warmings were just being discovered then. He believes understanding the stratospheric polar vortex and Sudden Stratospheric Warmings will be key to issuing a more accurate sub-seasonal forecast. A sub-seasonal forecast would be a 30 day to 45 day forecast.https://34ec3bea956cc15f888dc918e8d381f3.safeframe.googlesyndication.com/safeframe/1-0-37/html/container.html 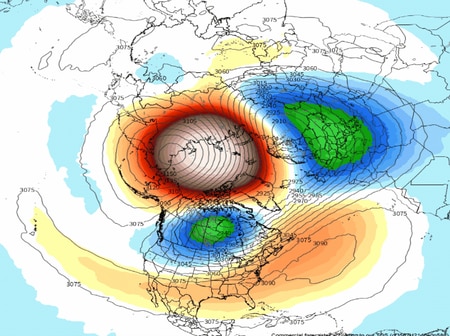 Wiind flow and temperature deviation from average at around 100,000 feet. Large red and white area signifies the area of stratospheric warming
https://34ec3bea956cc15f888dc918e8d381f3.safeframe.googlesyndication.com/safeframe/1-0-37/html/container.html
Ventrice explains to us how the domino effect goes during and after a SSW. The swirling vortex slows down and the normally westerly wind swirling high above the north pole becomes an easterly wind. The vortex, called the Polar Vortex, then slides off of being centered over the north pole. At this point Ventrice says to where the vortex shifts is key to weather in the eastern U.S. in the coming few weeks. This SSW has the polar vortex initially shifting to being centered over Siberia.

Temperature anomaly forecast at 100,000 feet up through January 15, 2021
https://34ec3bea956cc15f888dc918e8d381f3.safeframe.googlesyndication.com/safeframe/1-0-37/html/container.html
Now we jump to talking about the accompanying weather in the weather atmosphere, the troposphere, and here at the ground. Once the stratospheric vortex moves to Siberia, a strong, deep storm system develops over the north Pacific. The strong storm systems dominates and bends the jet stream across North America. The jet stream comes off the Pacific storm and runs across Canada, bottling up cold air in northern Canada. So Ventrice says the first effect of this particular SSW is a warm spell across the eastern U.S. This is the warm spell that we are currently in over Michigan and the Great Lakes. It’s not extremely warm, but we are running five to 15 degrees warmer than normal. After a week or so, the strong storm in the north Pacific is replaced by a strong high pressure ridge. Cold air starts to build in western Canada. Then the domino effect bends the jet stream south across the eastern U.S. Ventrice says around two weeks after this SSW, colder air should move into the eastern U.S. 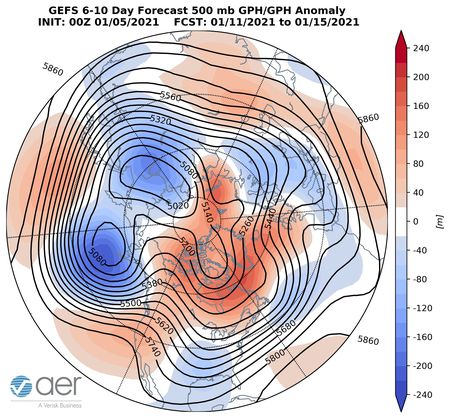 Forecast of steering flow of weather (around 15,000 feet up) for January 11 to January 15 shows colder flow developing over eastern U.S. (Graphic courtesy Judah Cohen- AER, A Verisk Company)
All of the weather models we meteorologists, including Ventrice, look at show a somewhat colder pattern coming around mid-January.

Surface temperature anomaly forecast for January 11 to January 15. (Graphic courtesy Judah Cohen- AER, A Verisk Company)
But will the cold be severe and last a long time? Ventrice’s research shows when a Sudden Stratospheric Warming starts by shifting to Siberia, the later effects over Michigan and the eastern U.S. are transient. He finds the cold usually lasts one week or so, and then can slosh back to a warmer-than-normal pattern. Ventrice says this back-and-forth cold to warm weather pattern could go through two or three cycles. This would give Michigan and the eastern U.S. an up-and-down temperature pattern into mid-February.
Ventrice has found a more severe, long lasting cold pattern when the SSW starts over the north Atlantic.
One more thing Ventrice watches for to predict the severity and duration of eastern U.S. cold – an upper-air block over Greenland. A strong upper-level block over Greenland enhances the southward kink in the jet stream over the eastern U.S. Currently a Greenland block is expected, but not to a very strong magnitude.https://34ec3bea956cc15f888dc918e8d381f3.safeframe.googlesyndication.com/safeframe/1-0-37/html/container.html
What Does This All Mean for Michigan?
The main point here is the upper atmosphere is going through some significant changes now, and in the next few weeks. This should bring Michigan and the eastern U.S. our first blast of real winter cold. Does that bring snowstorms? It’s hard to tell just yet, but cold is needed for snowstorms. So the first piece of a wintry puzzle will likely be in place by around Jan. 15 to Jan. 18.
Ventrice suggests the next avenue of research will be to learn how to quantify the amount of cold and the duration of cold after these Sudden Stratospheric Warmings. Ventrice reminds us this is a relatively new forecasting technique for long range forecasts.