OUT OF MIND » THE INSANITY OF REALITY » GOVERNMENTS & THE NEW WORLD ORDER » Dem Rep. Clark: ‘Trump Needs to Be Removed’ — Impeachment Articles Could Be Brought ‘as Early as Mid-Next Week’

Dem Rep. Clark: ‘Trump Needs to Be Removed’ — Impeachment Articles Could Be Brought ‘as Early as Mid-Next Week’ 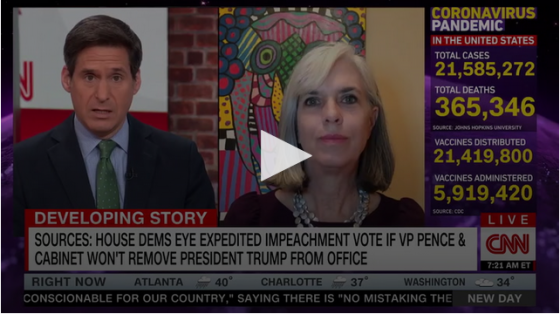 Source: Trent Baker
Friday, Rep. Katherine Clark (D-MA) called on President Donald Trump to be “removed from office” over the riots at the U.S. Capitol this week.
Clark said on CNN’s “New Day” if Vice President Mike Pence is not going to invoke the 25th Amendment, as has been reported, then Congress will move forward with impeachment. She expects the articles of impeachment to be brought against Trump “as early as mid-next week” as President-elect Joe Biden is set to take be inaugurated in less than two weeks.
“Donald Trump needs to be removed from office, and we are going to proceed with every tool that we have to make sure that that happens to protect our democracy. If the reports are correct and Mike Pence is not going to uphold his oath of office and remove the president and help protect our democracy, then we will move forward with impeachment to do just that,” Clark threatened.
“[W]e know that we have limited time, but that every day that Donald Trump is President of the United States is a day of grave danger,” she added. “So, we can use procedural tools to get articles of impeachment to the floor for a House vote quickly. We have already had Chairman Jerry Nadler, chair of the Judiciary Committee, say that he will use those tools to bring the articles as fast as possible.”
“When is that?” host John Berman asked.
“Well, that will be, you know, as early as mid-next week,” Clark replied. “We do have a process we have to go through, but let’s be clear what’s at stake here. We have a president who incited a seditious mob to storm the Capitol. We now have five deaths from that. And the harm to our democracy is really unfathomable.”

OUT OF MIND » THE INSANITY OF REALITY » GOVERNMENTS & THE NEW WORLD ORDER » Dem Rep. Clark: ‘Trump Needs to Be Removed’ — Impeachment Articles Could Be Brought ‘as Early as Mid-Next Week’