» Halfway Through this Winter of Covid, Overall Mortality is Around Normal for this Time of Year. Something Doesn’t Add Up

» No flight from the physical world

Yesterday at 1:28 pm by Consciousness Of Economic

» That Which Remains Unconscious will Come to us as Fate

Yesterday at 1:27 pm by Consciousness Of Economic

Yesterday at 1:26 pm by Consciousness Of Economic 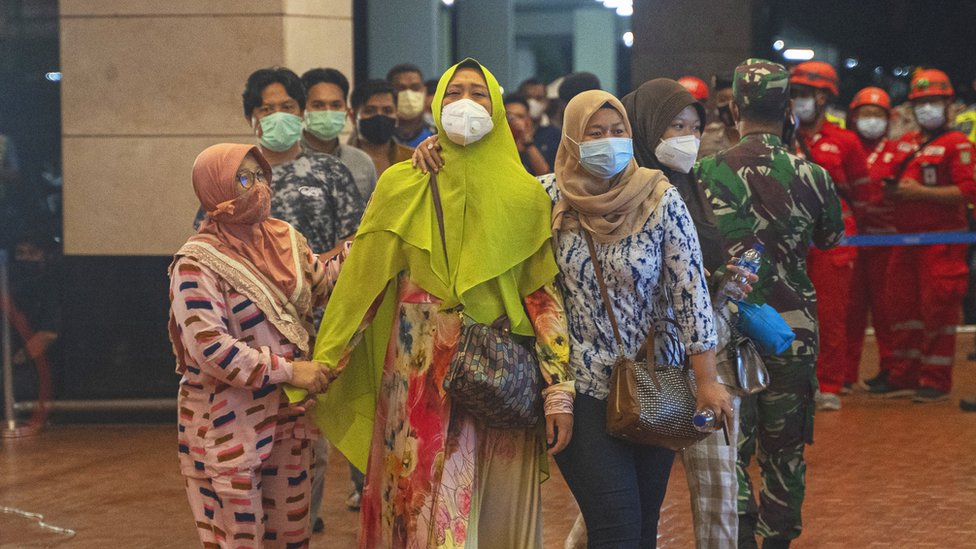 image copyrightGetty Images
image captionRelatives of those on board are waiting anxiously for news
A Boeing 737 passenger plane carrying 62 people is believed to have crashed into the sea shortly after take-off from Indonesia's capital Jakarta.
The Sriwijaya Air disappeared from radars four minutes into its journey to Pontianak in West Kalimantan province.
It is thought to have dropped more than 3,000m (10,000ft) in less than a minute, according to flight tracking website Flightradar24.com.
Witnesses said they had seen and heard at least one explosion.
Fisherman Solihin, who goes by one name, told the BBC Indonesian service he had witnessed a crash and his captain decided to return to land.
"The plane fell like lightning into the sea and exploded in the water," he said.
"It was pretty close to us, the shards of a kind of plywood almost hit my ship."
A number of residents of an island near where the plane disappeared told the BBC they had found objects they thought were from the plane. 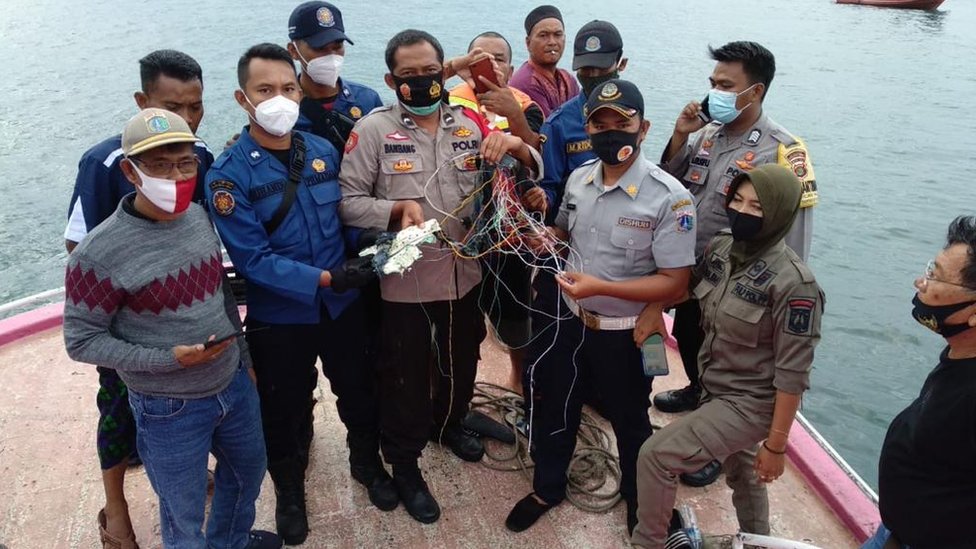 image copyrightMulyono/Naki
image captionPolice officers and fishermen show debris that they believe came from the plane
Search and rescue efforts were suspended overnight but were due to resume on Sunday.
The Indonesian navy was reportedly deployed to look for the aircraft on Saturday. Navy official Abdul Rasyid told Reuters news agency it had determined the plane's coordinates and ships had been deployed to the location.
The aircraft is not a 737 Max, the Boeing model that was grounded from March 2019 until last December following two deadly crashes.

Last contact with the plane, with the call sign SJY182, was made at 14:40 local time (07:40 GMT), according to the transport ministry. The usual flight time to Pontianak, in the west of the island of Borneo, is 90 minutes.
It did not send a distress signal, according to the head of national search and rescue agency Air Marshal Bagus Puruhito.
There were thought to be 50 passengers - including seven children and three babies - and 12 crew on board, though the plane has a capacity of 130. Everyone on board was Indonesian, officials say.
Relatives of the passengers have been waiting anxiously at the airport in Pontianak, as well as at Jakarta's Soekarno-Hatta International Airport.
"I have four family members on the flight - my wife and my three children," Yaman Zai told reporters through tears.
"[My wife] sent me a picture of the baby today... How could my heart not be torn into pieces?" 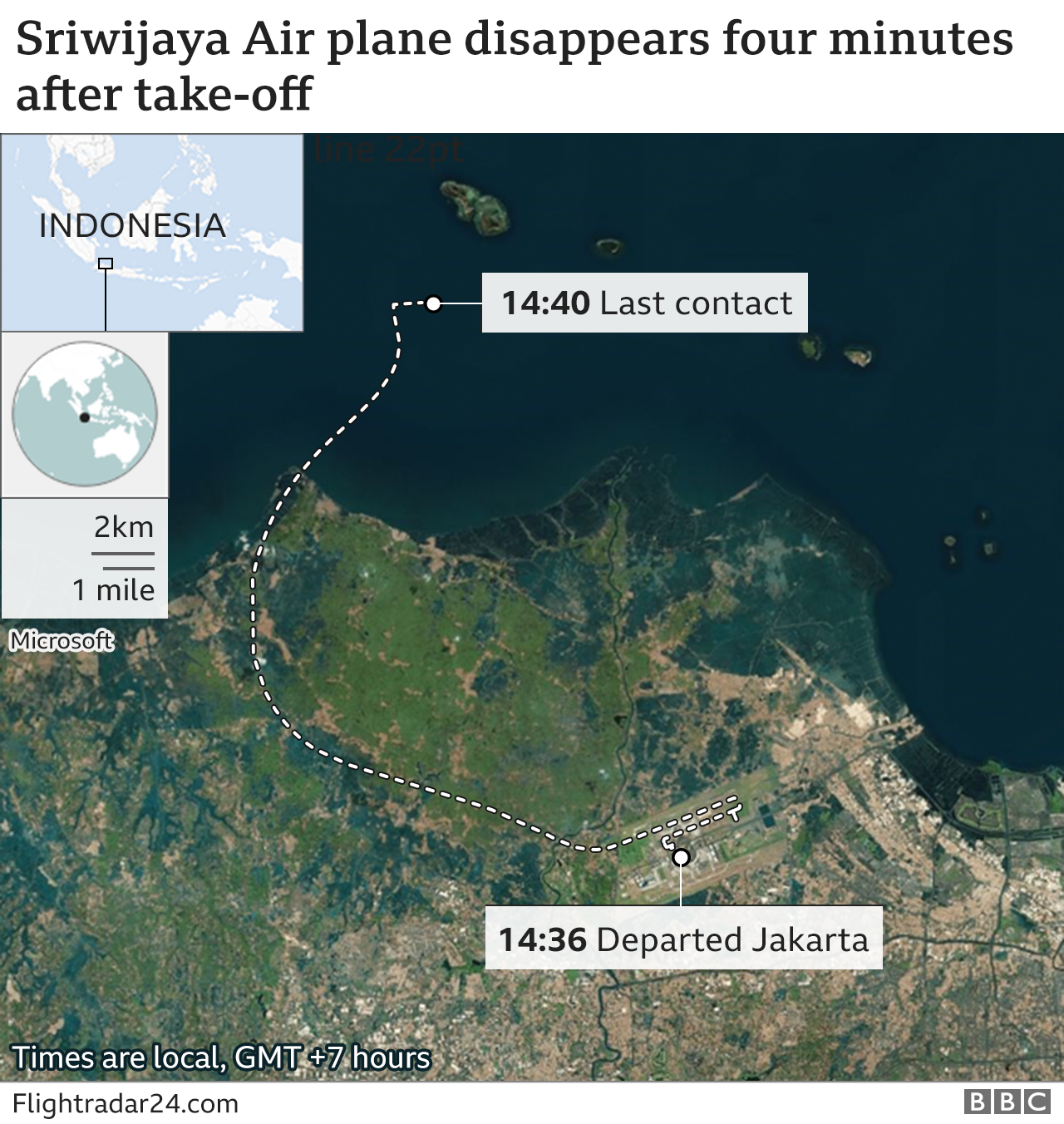 According to registration details, the plane is a 26-year-old Boeing 737-500.
It was in good condition, Sriwijaya Air chief executive Jefferson Irwin Jauwena told reporters. Take-off had been delayed for 30 minutes due to heavy rain, he said.
Sriwijaya Air, founded in 2003, is a local budget airline which flies to Indonesian and other South-East Asian destinations. 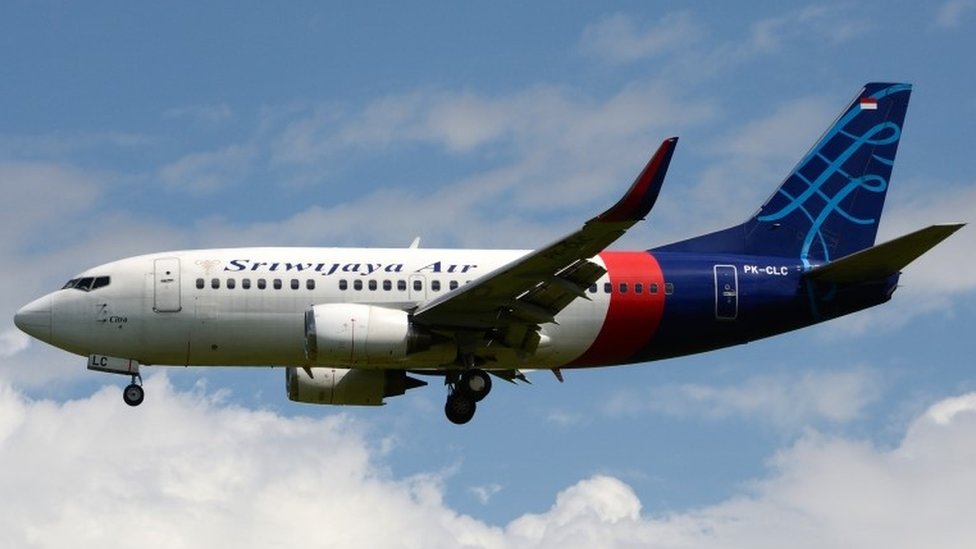 image copyrightGM Fikri Izzudin Noor
image captionThe Sriwijaya Air plane disappeared from radar screens shortly after take-off (file photo)
The plane went missing about 20km (12 miles) north of the capital Jakarta, not far from where another flight crashed in October 2018.
A total of 189 died when an Indonesian Lion Air flight plunged into the sea about 12 minutes after take-off from the city.
That disaster was blamed on a series of failures in the plane's design, but also faults by the airline and the pilots.
It was one of two crashes that led regulators to pull the Boeing 737 Max from service. The model resumed passenger flights in December after a systems overhaul.
The BBC's Jerome Wirawan in Jakarta says the latest events will bring up difficult questions and emotions in Indonesia, whose airline industry has faced intense scrutiny since the Lion Air crash.