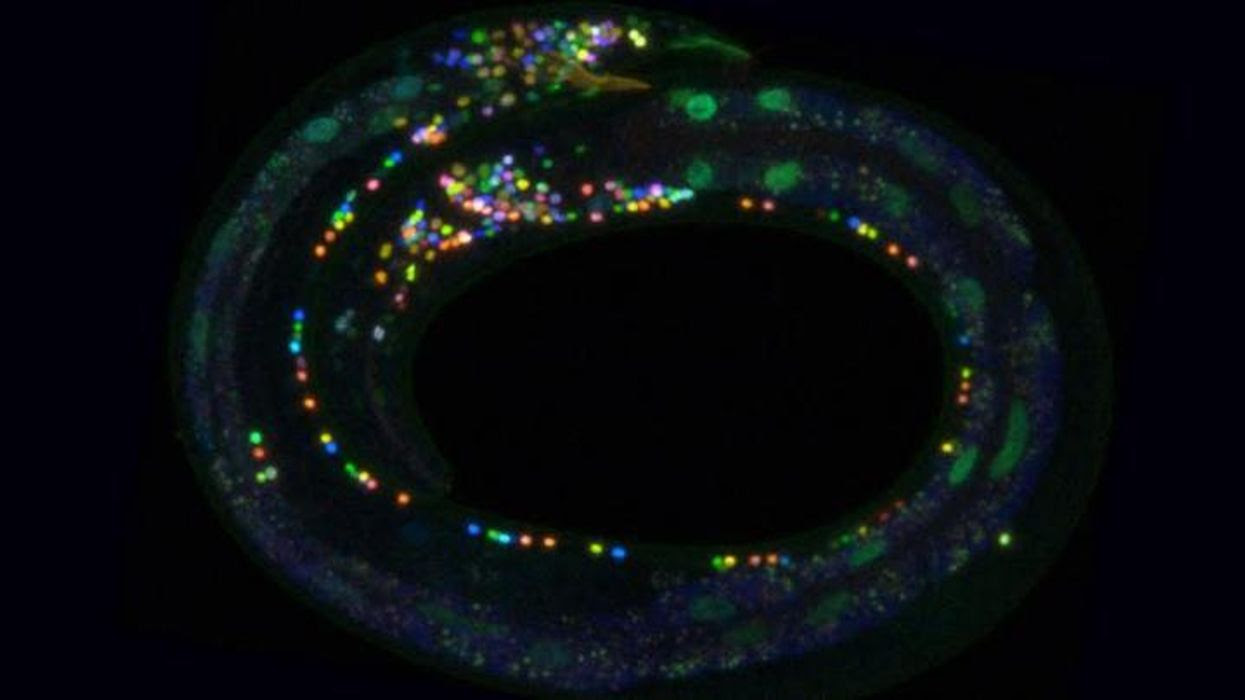 A powerful new tool lights up the brains of worms, and may soon help draw maps of other animals brains.

A worm with NeuroPAL colors coiled into an O-shape with the head and tail at the top of the ring. Every neuron (the colored dots) can be identified by its color. This is made possible with fluorescent proteins.
Credit: Eviatar Yemini

The human brain is one of the most complicated things in the known universe. A fatty mass containing 86 billion neurons connected by 100 trillion synapses, it automatically regulates the foundational bodily functions, reviews sensory data to permit the business of living, and is capable of abstract thought of dazzling complexity and brilliance.
Exactly how these cells and connections do this remains a mystery, however. These endless connections are difficult to trace, and how different parts of the brain work together—and even what the various components do—is still the subject of cutting edge research.
That research will soon be a little bit easier and a lot more colorful due to a new technique by scientists at Columbia that can light up neurons and synapses in vibrant tones.


I’ve heard of a vibrant imagination, but this is ridiculous.

NeuroPAL (Neuronal Polychromatic Atlas of Landmarks) is a genetic engineering technique that lights up neurons in fluorescent, easily discerned colors. Neurons expressing the same genetic information will be the same color under a microscope, allowing scientists to produce an easily readable map showing which neurons have similar genetic details and functions. This provides much more information than previous methods. When combined with other techniques that record the communications between cells, it can provide previously impossible insights into neural network dynamics.
In this study, published in Cell, the scientists used NeuroPal on Caenorhabditis elegans (C. elegans) worms and on computer screens.
C. elegans is commonly used in biological science for experimentation. A tiny creature, they have a comparatively simple and well-mapped nervous system. Previous studies using electron microscopes have mapped the connections in the worm's brain but have faced difficulties identifying every neuron in the system. As mentioned, NeuroPal can identify every neuron that expresses certain genetic features.
Using this tool, the study found that the connections in this animal's brain are much more complicated than previously known.
The researchers also created a computer program that provides optimal color schemes for using NeuroPal in other, more complicated animals.


What use is a mapped brain, exactly?

By providing a way to reliably identify different types of neuron cells and visibly present them for observation, NeuroPal will make creating comprehensive brain maps much simpler. In the discussion section of the recent study, the authors explain the potential uses of this tool in expanding our understanding of neural networks, including those not belonging to small worms:
"To date, functional networks have been investigated by recording the activity of small subsets of labeled neurons. More recent work has inaugurated whole-brain activity imaging with cellular resolution. However, the inability to reliably identify all neurons within whole-brain recordings has precluded a full picture with circuit-level details […] Coupling NeuroPAL with whole-brain activity imaging methods permits a unified view of network dynamics, across animals, without sacrificing circuit-level details."
The lead author of the new study, Dr. Eviatar Yemini, shared another potential use with Columbia News:
"Being able to identify neurons, or other types of cells, using color can help scientists visually understand the role of each part of a biological system. That means when something goes wrong with the system, it may help pinpoint where the breakdown occurred."
NeuroPal has already been given to other researchers, and published studies utilizing it are beginning to trickle out. It is only a matter of time before this tool provides us with a much-improved understanding of the brain and its functions.
From Your Site Articles

Related Articles Around the Web