THE GREAT RESET: We Are at War


The Smoking Man / 8 hours ago

We Are at War 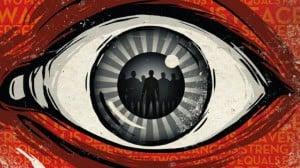 We are at war. Yes. And I don’t mean the West against the East, against Russia and China, nor the entire world against an invisible corona virus.
No. We, the common people, are at war against an ever more authoritarian and tyrannical elitist Globalist system, reigned by a small group of multi-billionaires, that planned already decades ago to take power over the people, to control them, reduce them to what a minute elite believes is an “adequate number” to inhabit Mother Earth – and to digitize and robotize the rest of the survivors, as a sort of serfs. It’s a combination of George Orwell’s “1984” and Aldous Huxley’s “Brave New World”.
Welcome to the age of the transhumans. If we allow it.
Vaccination
That’s why vaccination is needed in warp speed, to inject us with transgenic substances that may change our DNA, lest we may wake up, or at least a critical mass may become conscious – and change the dynamics. Because dynamics are not predictable, especially not in the long-term.
The war is real and the sooner we all realize it, the sooner those in masks and those in social distancing take cognizance of the worldwide “anti-human” dystopian situations we have allowed our governments to bestow on us, the better our chance to retake our sovereign selves.
Today we are confronted with totally illegal and oppressive rules, all imposed under the pretext of “health protection”.
Non-obedience is punishable by huge fines; military and police enforced rules: Mask wearing, social distancing, keeping within the allowed radius of our “homes”, quarantining, staying away from our friends and families.
Actually, the sooner, We, the People, will take up an old forgotten characteristic of human kind – “solidarity” – and fight this war with our solidarity, with our love for each other, for mankind, with our love for LIFE and our Love for Mother Earth, the sooner we become again independent, self-assured beings, an attribute we have lost gradually over the last decades, at the latest since the beginning of the neoliberal onslaught of the 1980s.
Slice by tiny slice of human rights and civil rights have been cut off under false pretexts and propaganda – “security” – to the point where we, drowned in propagated dangers of all kinds, begged for more security and gladly gave away more of our freedoms and rights. How sad.
Now, the salami has been sliced away.
We suddenly realize, there is nothing left. Its irrecoverable.
We have allowed it to happen before our eyes, for promised comfort and propaganda lies by these small groups of elitists – by the Globalists, in their thirst for endless power and endless greed – and endless enlargements of their riches, of their billions. – Are billions of any monetary union “riches”? – Doubtfully. They have no love. No soul, no heart just a mechanical blood-pump that keeps them alive, if you can call that a “life”.
These people, the Globalists, they have sunk so deep in their moral dysfunction, totally devoid of ethics, that their time has come – either to be judged against international human rights standards, war crimes and crimes against humanity – similar as was done by the Nuremberg Trials after World War II, or to disappear, blinded away by a new epoch of Light.

As the number of awakening people is increasing, the western Powers that Be (PTB) are becoming increasingly nervous and spare no efforts coercing all kinds of people, para-government, administrative staff, medical personnel, even independent medical doctors into defending and promoting the official narrative.
It is so obvious, when you have known these people in “normal” times, their progressive opinions suddenly turning, by 180 degrees, to the official narrative, defending the government lies, the lies of the bought “scientific Task Forces” that “advise” the governments, and thereby provide governments with alibis to “tighten the screws” a bit more (Ms. Merkel’s remarks) around the people, the very people the governments should defend and work for; the lies and deceptive messages coming from “scientists” who may have been promised “eternal, endless ladders of careers”, or of lives in a hidden paradise?
What more may they get in turn for trying to subvert their friends’, peers’, patients’ opinions about the horror disease “covid-19”? – Possibly something that is as good as life itself – and is basically cost free for the avaricious rich. For example, a vax-certificate without having been vaxxed by the toxic injections, maybe by a placebo – opening the world of travel and pleasurable activities to them as “before”.
By the way, has anybody noticed that in this 2020 / 2021 winter flu-season, the flu has all but disappeared? – Why? – It has conveniently been folded into covid, to fatten and exaggerate the covid statistics. It’s a must, dictated by the Globalists, the “invisible” top echelon, whose names may not be pronounced. Governments have to comply with “covid quotas”, in order to survive the hammer of the Globalists.
Other special benefits for those selected and complacent defender of the official narrative, the placebo-vaxxed, may include dispensation from social distancing, mask wearing, quarantining – and who knows, a hefty monetary award. Nothing would be surprising, when you see how this tiny evil cell is growing like a cancer to take over full power of the world – including and especially Russia and China, where the bulk of the world’s natural resources are buried, and where technological and economic advances far outrank the greed-economy of the west. They will not succeed.
What if the peons don’t behave? – Job loss, withdrawal of medical licenses, physical threats to families and loved ones, and more. 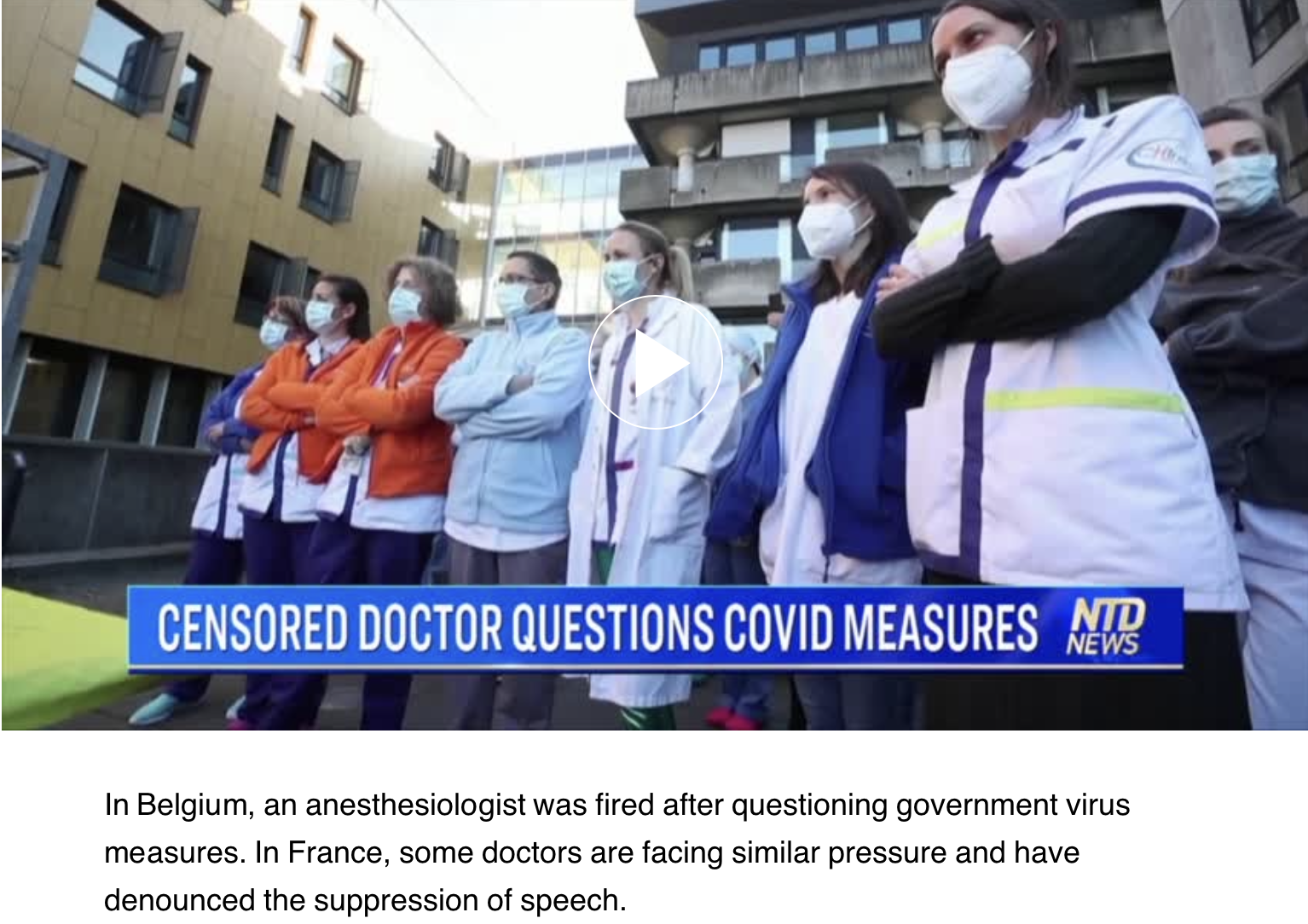 Screen Shot: NTD, December 16, 2020
The Globalists evil actions and influence-peddling is hitting a wall in the East, where they are confronted with educated and awakened people.
We are at war. Indeed. The 99.999% against the 0.001%.

Their tactics are dividing to conquer, accompanied by this latest brilliant idea – launching an invisible enemy, a virus, a plandemic, and a fear campaign to oppress and tyrannize the entire world, all 193 UN member countries.
The infamous words, spoken already more than half a century ago by Rockefeller protégé, Henry Kissinger, comes to mind:
“Who controls food supply controls the people; who controls the energy can control whole continents; who controls money can control the world.”
Quoted below are some lines and thoughts of a 1 January 2021, RT Op-Ed article by Helen Buyniski entitled “Civil war, medical discrimination, spy satellites and cyborgs! How 2021 could make us yearn for 2020”. The article may point us in a direction of what may happen in 2021, that we certainly do not yearn for:
“People everywhere are eager to bid farewell to 2020, a year in which our lives were turned upside down by power-mad elites who seized the Covid-19 pandemic as a chance to go full police state.
But be careful what you wish for…. merely putting up a new calendar does nothing to address [the mounting repression and tyranny], which seem certain to reach a breaking point.
Humanity has been pushed to the limit with arbitrary rules, enforced poverty, and mandated isolation — it will only take a spark or two for things to explode.”
And it continues –
”As vaccines are rolled out to the general public, the divide between those obeying the rules and the dissidents will only grow. Those who decline to get the jab will be treated as pariahs, banned from some public spaces and told it’s their fault life hasn’t gone back to normal, just as so-called “anti-maskers” have been.”
And more glorious prospects
“Anyone who isn’t thrilled by the idea of ingesting an experimental compound whose makers have been indemnified from any lawsuits, will be deemed an enemy of the state, even separated from their children or removed from their home as a health risk. Neighbors will gleefully rat each other out for the equivalent of an extra chocolate ration, meaning even the most slavishly obedient individuals could end up in “quarncentration camps” for upsetting the wrong person.”
Yes, we are in the midst of war.
A war that has already ravaged our society, divided it all the way down to families and friends.
If we are not careful, we may not look our children and grandchildren in the eyes, because we knew, we ought to have known what was and is going on, what is being done, by a small dark power elite – the Globalists. We must step out of our comfort zone, and confront the enemy with an awakened mind of consciousness and a heart filled with love – but also with fierce resistance.
If we fail to step up and stand up for our rights, this war goes on to prepare future generations – to abstain from congregating with other people.
They are already indoctrinating our kids into keeping away from friends, school colleagues, peers, and from playing in groups with each other – as the New Normal.
The self-declared cupula – the crème of the crop of civilization – the Globalist evil masters, already compromised and continue to do so, the education systems throughout the globe to instill into kids and young adults that wearing masks is essential for survival, and “social distancing” is the only way forward.
Must see Video
Children of the Great Reset

Breaking the Social Fabric. Towards Totalitarian Rule
They, the Globalists, know damned well that once a civilization has lost its natural cohesion – the social fabric is broken, the very fabric that keeps a civilization together and dynamically advancing, they have won the battle. Maybe not the war, since the war will last as long as there is resistance. The “dynamic advancing” – or simply dynamics itself – is their nightmare, because dynamics is what makes life tick – life, people, societies, entire nations and continents. Without dynamics life on the planet would stand still.
And that’s what they want – a Globalist dictator, controlling a small population of serfs, or robotized slaves, that move only when told, own nothing and are given a digital blockchain controlled universal income, that, depending on their behavior and obedience, they may use to buy food, pleasure and comfort. Once the slaves are dispensable or incorrigible, their electronically controlled brains are simply turned off – RIP.
This may turn out to be the most devastating war mankind has ever fought.
May We, the People, see through this horrendous sham which is already now playing out, in Year One of the UN Agenda 21 /30;
And may We, the People, the commons, win this war against a power-thirsty elite and its bought administrators and “scientists” throughout the world – and restore a sovereign, unmasked, socially coherent society – in solidarity.


Peter Koenig is a geopolitical analyst and a former Senior Economist at the World Bank and the World Health Organization (WHO), where he has worked for over 30 years on water and environment around the world. He lectures at universities in the US, Europe and South America. He writes regularly for online journals and is the author of Implosion – An Economic Thriller about War, Environmental Destruction and Corporate Greed; and  co-author of Cynthia McKinney’s book “When China Sneezes: From the Coronavirus Lockdown to the Global Politico-Economic Crisis” (Clarity Press – November 1, 2020).

We Are at War