OUT OF MIND » THE INSANITY OF REALITY » WIKILEAKS & JULIAN ASSANGE » Trump slammed for failing to pardon Assange, Snowden and freeing War Criminals

The WikiLeaks founder and NSA whistleblower, seen by many as free-speech icons, were not included in outgoing US president’s list of people being pardoned. 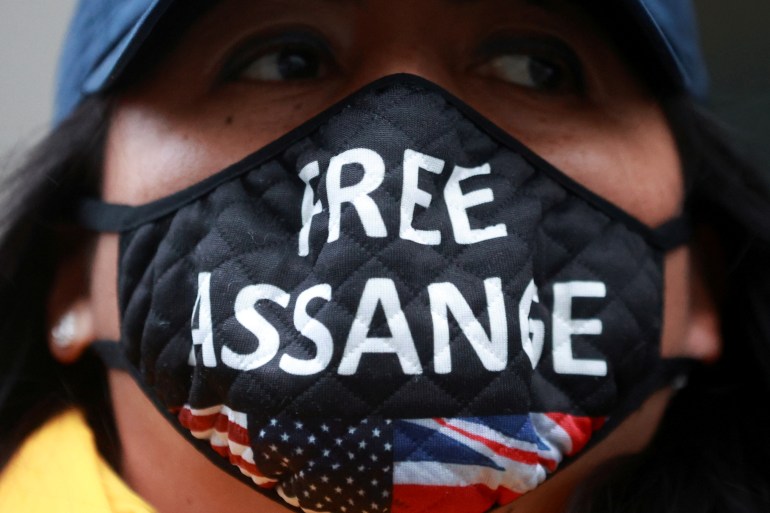 Assange is facing possible extradition to the US from the United Kingdom over a range of charges relating to WikiLeaks’ release of confidential US military records and diplomatic cables a decade ago [File: Hannah McKay/Reuters]
20 Jan 2021


Supporters of Julian Assange and Edward Snowden have criticised outgoing US President Donald Trump for failing to pardon the WikiLeaks founder and NSA whistleblower before leaving office, calling the oversight “disappointing”.

In the final hours of his presidency, Trump on Wednesday pardoned 73 individuals and commuted the sentences of 70 others. Keep readingTrump pardons 73, commutes sentence for 70 others: Full listHow will Julian Assange’s legal saga end?‘Let’s start afresh’: Biden moves to reverse Trump policiesJulian Assange timeline: Computer programmer to cause celebre

Steve Bannon and major Republican Party fundraiser Elliott Broidy were included in the diverse list, as well as figures with little apparent ties to Trump’s administration, including the rappers Lil Wayne and Kodak Black.
But calls for Trump to pardon Assange – who is facing possible extradition to the US from the United Kingdom over charges relating to WikiLeaks’ release of confidential US military records and diplomatic cables a decade ago, fell on deaf ears.
The omission provoked fury among his supporters, many of whom took to social media to express their anger.

Christine Assange, the Wikileaks founder’s mother, said she was “not shocked, just disappointed” by Trump’s decision.
“My private prediction was right,” she tweeted. “Courage is not always contagious.”

Others pointed out the contrast between Trump’s decision to pardon the Blackwater US military contractors convicted of killing civilians in Iraq and “shady political operatives”, but not Assange and Snowden, who many observers view as icons of press freedom.
Snowden, 37, fled the US after leaking secret National Security Agency files in 2013 and was given asylum in Russia. In November he announced that he would seek Russian citizenship together with his wife for the sake of their family; the couple are expecting a baby.
US authorities have for years wanted Snowden returned to face a criminal trial on espionage charges.
Investigative journalist Stefania Maurizi, who works for the Italian daily Il Fatto Quotidiano and has worked on all of WikiLeaks’s secret documents, including the 2010 documents for which Assange has been charged, said she had expected the decision.

“I find no satisfaction in saying: I told you so. President Trump pardoned the #Blackwater’s #WarCriminals, and did NOT pardon a journalist who exposed #WarCrimes and #torture, Julian #Assange, and a whistleblower who exposed State criminality, Edward #Snowden. This is who they are,” she tweeted.
Paul Bernal, a lecturer in media law at the UK’s University of East Anglia and the author of Internet Privacy Rights: Rights to Protect Autonomy, also said he had not expected Assange to be pardoned.
Randy Quaid, an American actor, said he was “deeply disturbed” by Trump not pardoning Assange.
Internet entrepreneur and Megaupload founder Kim Dotcom, who is also facing possible extradition to the US from New Zealand over copyright charges, called for Assange’s supporters to “stay strong”.

“To all #Assange supporters out there. It is disappointing that Trump did not pardon Julian. But our numbers have grown. Many respected people join our movement to free Julian every day,” he said in a post on Twitter. “Our voices can no longer be ignored. Let’s fight for Julian’s release this year. Stay strong.”
In the days before the list of pardons was released, many, including Snowden himself, had called for Trump to include Assange.
Snowden said Trump’s failure to pardon Assange would mean he would “remain in prison indefinitely while the DOJ [Department of Justice] endlessly files meritless appeals out of spite”.
One Twitter user joked that had Snowden and Assange released a rap record, perhaps they would have received a pardon.

Assange back in prison

A British judge ruled two weeks ago that Assange should not be extradited to the US, saying his mental health problems meant he would be at risk of suicide.
Assange, an Australian citizen, suffers from depression and has been diagnosed with an autism spectrum disorder.
Lawyers for the US government have appealed the decision blocking Assange’s extradition.

Julian Assange spoke via internet outside the University Occupation in Barcelona
US officials say by leaking certain material, some of which exposed wrongdoing in the wars in Afghanistan and Iraq, Assange put lives in danger.
Assange’s legal team say he acted lawfully and argue that the case against him has been politicised.
The charges levelled against Assange – 17 counts of espionage and one of computer misuse – carry a maximum prison sentence of 175 years.
He is currently being held in London’s maximum-security Belmarsh prison, having been returned there after the British judge who blocked his extradition later refused him bail.

OUT OF MIND » THE INSANITY OF REALITY » WIKILEAKS & JULIAN ASSANGE » Trump slammed for failing to pardon Assange, Snowden and freeing War Criminals