OUT OF MIND » BREAKING NEWS & HOT TOPICS » THE GREAT DIE OFF » Dr. Simone Gold – The Truth about the CV19 Vaccine

Dr. Simone Gold – The Truth about the CV19 Vaccine 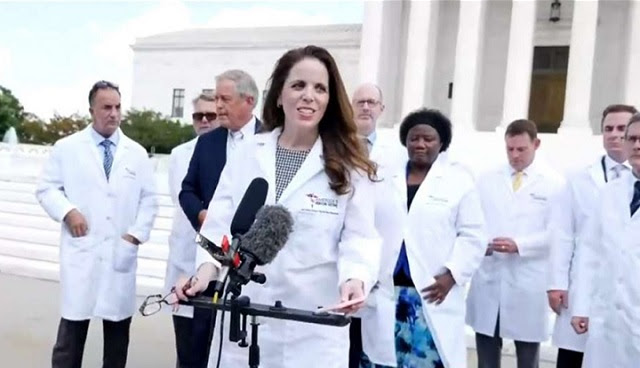 Dr. Simone Gold – The Truth about the CV19 Vaccine

On January 3rd, 2021, Emergency Physician, Dr. Simone Gold gave this gobsmacking talk on the Great Awakening show about the breathtaking skullduggery that was coordinated worldwide across governments and health agencies against the drug, hydroxychloroquine, in the ordering of needless masks, lockdowns and now, in mandating the experimental vaccine.
I recommend that everyone share this with their normie friends and loved ones.
Dr. Gold says, “I come before you on behalf of America’s Frontline Doctors, which is a volunteer physicians organization that we started specifically to combat the serious and life-threatening disinformation that has really taken over America and really, the entire Globe.
Dr. Gold decided to speak out after she prescribed hydroxychloroquine and zinc to a COVID-positive patient, who recovered completely in 48 hours. However she, herself was called into see her Medical Director, who threatened to fire her, while her State Board threatened her with a potential investigation of unprofessional conduct.
“We are licensed as individuals. It’s actually against the law to have a corporate practice of medicine…it has to be the individual doctor physician, that’s why patients go to multiple doctors.
“It’s very, very scary stuff. I’ve been a doctor for a very long time. Before me, my father was a doctor. I’ve never seen anything like this, where we have groups of physicians or scientists or government bureaucrat agencies essentially lying to the American people and people across the world.”
The publication of fraudulent studies in the world’s pre-eminent medical journals, including The Lancet and the draconian decrees have crashed the world economy and resulted in hundreds of thousands of deaths.
The experimental vaccine has not been shown to reduce mortality, in a disease which already has an almost non-existent mortality rate and there’s no evidence that it stops transmission. Why is the vaccine being mandated, again?
Dr Gold raises the very real security threat of mandating an experimental vaccine. “What if, for example you’ve given that vaccine to all of your healthcare workers and you’ve given that vaccine to all of your military and all of your police officers. I find this shocking, as a public policy matter, that we would even consider giving anything to our healthy first responders and frontline people who defend our country…It’s so shocking to accept that kind of risk.”
She ends her talk with a call to action. “We, at America’s Frontline Doctors intend to fight th urge that’s sweeping the globe to mandate people taking an experimental biological agent. This is a big fight we have on our hands…we’re very concerned with private businesses mandating this; employers, schools and travel – airlines, in particular.
“You can imagine if all the airlines got together, the CEOs and said, “You know what? We’re just going to mandate this – the 6 biggest ones all got together and said that. It’s just like the masks, right? You can’t avoid their mandates. This is a very big problem. So, America’s Frontline Doctors is tackling this. We intend to talk to the decision-makers in the airline industry.
“One of our tools in that battle will be to go in armed with at least 1 million signatures of human beings who are going to say, “No! We are not going to do business with anybody – and we’re not going to comply with anyone who’s going to mandate this…everyone hearing this can agree, we don’t need the CEOs of big companies forcing experimental biological agents on anyone…
“We are going to be at their mercy if we don’t get ahead of them. We must get ahead of that bad decision that they seem headed towards making. Qantas Airlines has already said that they’re going to do this…
Sign the petition and get everybody you know to sign it! StopMedicalDiscrimination.org …
She says, “This is your life! Are you going to be able to travel?…frame this as a Human Rights issue. You can’t mandate that human beings take experimental biological agents.”

OUT OF MIND » BREAKING NEWS & HOT TOPICS » THE GREAT DIE OFF » Dr. Simone Gold – The Truth about the CV19 Vaccine

» Dr. Simone Gold sentenced to PRISON for speaking at U.S. Capitol on Jan. 6, 2021
» Italy Dr speaks against the cv19 vaccine
» Pro VX Doctor: we made a terrible mistake w the CV19 Vaccine must watch!!
» What is the truth about ‘surge in pilot deaths’ after vaccine rollout?
» The Truth About Karen Hudes, The World Bank, and Your Gold by Anna Von Reitz