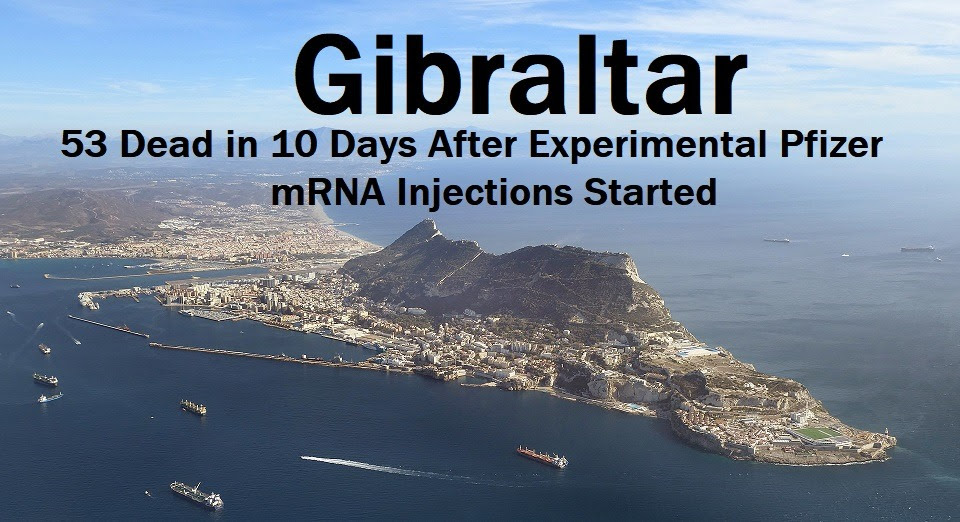 by Brian Shilhavy
Editor, Health Impact News
Gibraltar is a British Colony at the southern tip of the Iberian Peninsula attached to the country of Spain. It’s population is just over 30,000 people, and it is best known for its huge “rock,” the “Rock of Gibraltar.”
I have been contacted by residents in Gibraltar stating that 53 people have died in 10 days immediately following the roll out of injections of the Pfizer mRNA COVID injections, and calling it a “massacre.”
Local media reports confirm the deaths, but blame them on COVID, and not the COVID injections.
However, prior to the roll out of the injections, it is reported that only 16 people in total died “from COVID” since the beginning of the “pandemic” about a year ago.
A Kevin Rushworth reported:

Tiny Gibraltar Shines Huge Light on Vaccine Deaths
Ever since the epidemic began, sorting genuine Covid deaths from others has been a major issue. Now we have the added problem of vaccines in the mix. The UK now allegedly has the highest daily “Covid death” rate ever. Even higher than the “First Wave,” in spite of the substantial degree of herd immunity that has inevitably accrued since the beginning. This atypical “Second Wave” coincides with the vaccine roll-out. Are the two connected?
Gibraltar, normally called simply “Gib,” provides a very clear picture. This tiny British Colony, barely three miles long, appended to the South coast of Spain, has only 32,000 residents. It had suffered relatively little from the epidemic before the 9th January this year, with only seventeen deaths for the whole period. The death rate was well down the Deaths per Million League Table. This was not due to isolation, since Spanish workers have continued to pour into Gib every morning, and back out every evening.
Since the 9th January “Covid deaths” per million have rocketed to Third Place on the Worldometer site. Thirty-six more deaths in little over a week. What changed on the Ninth? The RAF flew in nearly 6,000 Pfizer vaccines, cooled to -70C by dry ice. They were put to use quickly to avoid the risk of degradation. Tiny Gibraltar is like a petri dish; in no other place has there been such a brutally clear relationship between vaccine roll-out and increased “Covid deaths.” Local media and Government have not even referred to the obvious connection. And media elsewhere has conveniently not noticed. Yet failing to recognise that these deaths demand, at the very least, immediate investigation, requires a criminal failure of judgement.

I cannot find the original source of this quote, but local media reports seem to confirm that the deaths occurred after the experimental Pfizer mRNA injection program started.
13 people died the first weekend, most of them elderly, and 27 the first week, as per local media sources.
From The Gibraltar Chronicle on January 17, 2021:

Gibraltar recorded another 13 Covid-related deaths over a “devastating” weekend that drove the death toll to 43 since the start of the pandemic.
During the past week alone, 27 people have passed away either as a direct result of the virus or while infected with it.
Nine Covid-related deaths were recorded on Sunday, the worst in a single day since the public health crisis almost a year ago.
The stark data was confirmed by the Gibraltar Government in its latest Covid update on Sunday, as Chief Minister Fabian Picardo confirmed he would address the community in a live press conference from No.6 Convent Place at 4pm on Monday.
Mr Picardo described the latest developments as “harrowing”, adding he himself lost a relative and friends in recent days.
All but three of those who died this weekend were in the care of the Elderly Residential Services, where there were still 130 active cases of Covid-19 on Sunday.
Those who died included six women and four men, the youngest in their early 70s, the eldest in their late 90s. All were recorded as being deaths from Covid-19.
Two men and woman who were not in the care of ERS also died this weekend from complications arising from Covid-19, including a man in his late 60s.

The first batch of the experimental Pfizer mRNA COVID injections were delivered by the military on January 9th, according to the UK Defense Journal:

A British A400M Atlas transport aircraft has delivered the first doses of the Pfizer COVID19 vaccine to Gibraltar.
According to a statement from the Government of Gibraltar:
“Her Majesty’s Government of Gibraltar is delighted to announce that the first delivery of the Pfizer/BioNTech COVID-19 vaccine on Saturday 9 January 2021. Upon arrival, the vaccine will be immediately be taken directly to dedicated freezers in the basement of St Bernard’s Hospital and kept at -75 degrees centigrade.
This first delivery is being provided to Gibraltar by the UK Government as part of its programme to supply the Overseas Territories, as such the methodology of delivery is the same as it is in the UK.
A 5850 doses of the vaccine will be received in this first delivery. The second delivery of the vaccine is expected by the end of January. The aim to have vaccinated all over 70s with at least one dose by mid February, assuming that the vaccines arrive as planned.”
The vaccination programme for the public in Gibraltar will commence on Monday 11th January and will be at the former Primary Care Centre at the ICC.

Expatica.com reported that the injections started on January 9th, and that by Sunday night January 10th, 5,847 doses had been administered.

Gibraltar began rolling out its vaccination programme on January 9 using the Pfizer vaccine and by Sunday night had administered 5,847 doses — covering around 17 percent of the population. (Full Article.)

The Government of Gibraltar reported that as of January 10th, just one day after the injections started, 4 people immediately died:

Instead of immediately halting the COVID “vaccination” program, The Chief Minister, Fabian Picardo, stated that the “vaccines” brought “genuine relief and hope for a brighter tomorrow.”

The Chief Minister, Fabian Picardo, said: ‘I am extremely saddened by today’s news of the loss of four members of our community to COVID-19. My thoughts and deepest sympathies are with the families and friends of the deceased.
‘The poignancy of their deaths on the same day as Gibraltar’s vaccination programme has begun is particularly painful.
‘We are not out of the woods yet. The rollout of the vaccine brings us genuine relief and hope for a brighter tomorrow. But until we can vaccinate everyone, the best way to protect your loved ones is to stay at home. Remember also that it takes a few weeks for the vaccine to begin to offer protection against COVID-19, so even when you are vaccinated you should still take the greatest of care.
‘That means, for now, continuing to stay at home, wearing a mask if you do have to go out for essential reasons and washing your hands well and often.
‘I urge everyone to register their interest to receive the vaccine using the GHA’s dedicated online form, available at https://www.gha.gi/covid-19-vaccination-interest-form/. I already have done, and eagerly await my turn in line. For now, we will rightly focus on protecting our most vulnerable and our valued frontline workers, whose continued tireless efforts have brought us to this point where we can look to the future with hope.’ (Source.)

Yes, “massacre” is the correct term here, and another government official seemingly guilty of mass murder.
Do you see the pattern developing here? Inject the elderly first, watch them die by lethal injection, and then blame it on the virus, while encouraging everyone else to get the “vaccine” to protect themselves.
The sad thing is that, this is actually working. People are not resisting. Crowds are not rising up to protect the helpless, and imprison the murderous tyrants.
They’re obeying their government by being “good citizens” and wearing their masks, practicing social distancing, and staying home – just as they’re told to do.

Rescue those being led away to death; hold back those staggering toward slaughter.

If you say, “But we knew nothing about this,” does not he who weighs the heart perceive it? Does not he who guards your life know it? Will he not repay each person according to what he has done? (Proverbs 24:11-12)