by Matt Agorist
It was reported that the top climate change scientist for the National Oceanic and Atmospheric Administration received $4 million in funding from Congress along with permission to study two highly controversial geoengineering methods in an attempt to cool the Earth. 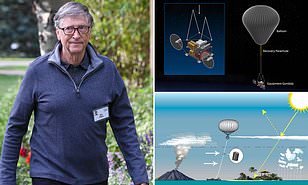 According to Science Magazine, David Fahey, director of the Chemical Sciences Division of NOAA’s Earth System Research Laboratory, told his staff last week that the federal government is ready to examine the science behind “geoengineering” — or what he dubbed a “Plan B” for climate change.
This plan is in congruence with the plan backed by billionaire Bill Gates in which plans have been made to spray dust into the atmosphere to dim the sun that would potentially reflect sunlight out of Earth’s atmosphere, triggering a global cooling effect.
The Stratospheric Controlled Perturbation Experiment (SCoPEx), launched by Harvard University scientists, aims to examine this solution by spraying non-toxic calcium carbonate (CaCO3) dust into the atmosphere — a sun-reflecting aerosol that may offset the effects of global warming.

What could possibly go wrong?

The extent to which Brennan talked about stratospheric aerosol injection shows that he and the CIA have likely been considering this for some time.
Although we are hearing more and more talk about geoengineering, it has been around for a very long time and not just in the realm of conspiracy theories. In fact, scientists have already suggested that it could be going on right now, unintentionally.
Researchers with NOAA previously suggested that contrails from airplanes may be inadvertently geoengineering the skies.
Chuck Long is a researcher with the Cooperative Institute for Research in Environmental Sciences (CIRES) at the NOAA Earth System Research Laboratory at the University of Colorado in Boulder.
At the American Geophysical Union Fall Meeting in 2015, Long and his team released their paper, “Evidence of Clear-Sky Daylight Whitening: Are we already conducting geoengineering?”. The analysis found that vapor from airplanes may be altering the climate through accidental geoengineering.
To be clear, no one here is claiming to be an expert on climate change or the effects of geoengineering. But one thing is clear and it’s the fact that there is still much to be debated and learned before humans deliberately begin altering Earth’s climate.
Aside from doing nothing to curb carbon emissions, if we are so quick to jump on this method, it could set off a chain reaction that could prove to be catastrophic.