Trump is gone, and the U.N. banned nukes, but the experts say the pandemic revealed how bad the world’s governments are at dealing with disaster. 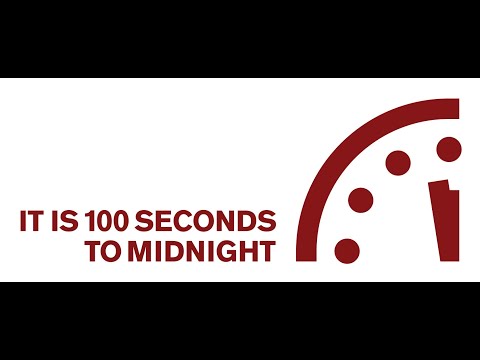 The Doomsday Clock will stay at 100 seconds to midnight, the closest the clock has ever been to doomsday, despite Donald Trump losing the election to Joe Biden.The Bulletin of the Atomic Scientists—a group of security experts and scientists who study humanity's chance of causing the apocalypse—set the clock at 100 seconds to midnight last year before the spread of COVID-19.
[*]
“Humanity continues to suffer as the COVID-19 pandemic spreads around the world. In 2020 alone, this novel disease killed 1.7 million people and sickened at least 70 million more,” the Bulletin said in a statement. “The pandemic revealed just how unprepared and unwilling countries and the international system are to handle global emergencies properly. In this time of genuine crisis, governments too often abdicated responsibility, ignored scientific advice, did not cooperate or communicate effectively, and consequently failed to protect the health and welfare of their citizens.”

The Doomsday Clock is a visual representation of how close humanity is to destroying itself. Every year since the Bulletin began keeping watch on Armageddon in 1947, a group of experts and scientists gather to discuss how likely the coming year is to be the world’s last. Then it adjusts the clock accordingly and the scientists explain to the public why we’re doomed.

At 100 seconds to midnight, the Bulletin is saying that humanity is on the precipice of disaster. For context, this is closer to midnight than the Bulletin set the clock during the Cuban Missile Crisis.

Last year, the Bulletin moved the clock 100 seconds to midnight because of a mix of nuclear and environmental issues. Trump was still president, both the U.S. and Russia had pulled out of the Intermediate-Range Nuclear Forces Treaty in 2019, and both countries were testing new nuclear weapons.

The Bulletin announced its decision to move the clock close to midnight in January and the picture of the world looked stark. Wildfires raged in California, the White House had just assassinated Iranian major general Qasem Soleimani, and North Korea was frequently conducting missiles tests. And all this was before COVID-19 became a global pandemic.

A lot has changed in the last six months, the Biden administration has indicated it’s open to resuming the Iran Nuclear Deal, is rejoining the Paris Climate Agreement and the World Health Organization, and has said it will renew NEW Start—an Obama era deal with Russia that limits the number of deployed nuclear weapons. The U.N. even banned nuclear weapons, a treaty that entered into force just a few days ago.

But for the Bulletin, COVID-19 revealed the incompetence of world government’s and sent a warning about their ability to deal with disasters. “We at the bulletin believe that, because humans created these threats, we can control them,” Rachel Bronson, President and CEO of the Bulletin said during a press conference announcing the clock’s 2021 time.

For Bronson, 2021 has been a “disastrous succession of falling dominos,” that has seen “the deliberate erosion of politicians of science and our core institutions.”

According to Jon Wolfsthal, a member of the Bulletin’s Science and Security Board and a former Special Assistant to the President of the United States, keeping the clock at 100 seconds to midnight was a hotly debated issue this year. “There’s more greenhouse gas in the atmosphere. We’re farther away from the basic goals of trying to stop climate change, let alone reverse it,” he told Motherboard over the phone. “There are more nuclear weapons in the world and, for most of the year, the U.S. was actively trying to teardown the guardrails against nuclear use was rapidly expanding its arsenal.”

The Bulletin’s statement talked about the nuclear risks and climate change issues facing the world, but focused on COVID-19 and the disinformation campaign that has swirled around it.

“Unchecked internet disinformation could have even more drastic consequences in a nuclear crisis, perhaps leading to a nuclear war that ends world civilization,” the statement said. “Disinformation efforts across communications systems are at this moment undermining responses to climate change in many countries. The need for deep thinking and careful, effective action to counter the effects of internet-enabled disinformation has never been clearer.”

Wolfsthal said that disinformation was an accelerant to the existential threat of nuclear weapons and climate change. COVID-19 isn’t the problem, it’s what COVID-19 revealed. “We live in a world where people are risking their lives by not wearing masks because they believe it will deprive them of oxygen,” he said. “How did we get to this place? It’s the most effective way to prevent the spread of disease, and has been for over 100 years. Yet there are people who risked their lives because they have been told otherwise. And they believe it because of the information bubble that they’re in. And that is a challenge that nobody has an answer for.”

It sees the pandemic as a warning, and keeping the clock so close to midnight is the Bulletin’s way of trying to drive that warning home. “The message is simple and chilling: Next time could be far worse,” it said in its statement. “Given the pandemic experience, no one can reasonably say he or she was not warned. It remains 100 seconds to midnight, the most dangerous situation that humanity has ever faced. It is time for all to take the actions needed to—quite literally—save the world.”

» Doomsday Clock Moves 100 Seconds To Midnight – Closest Point Since Cold War
» Tom Heneghan Intel Update - U.S. Doomsday Clock is Ticking
» CGI's FrancisDrake: LOS ANGELES EARTHQUAKE AND THE DOOMSDAY CLOCK ("FIVE MINUTES 'TIL MIDNIGHT...")
» Armageddon Update: 'Doomsday Clock' Stands at 2 Minutes to Midnight
» Scientists May Be About To Wind The Doomsday Clock Forward To Its Most Critical Level Since The Height Of The Cold War