OUT OF MIND » THE INSANITY OF REALITY » GOVERNMENTS & THE NEW WORLD ORDER » GENERAL FLYNN LAYS OUT THE FACTS!

GENERAL FLYNN LAYS OUT THE FACTS!

On January 17, a few days before the inaugural event of the new CEO, General Micheal Flynn expressed his confidence that Trump will serve as president in 2021. He also stated that we are in a national emergency due to Foreign interference in our elections. They have evidence and proof that Germany, Spain, Italy, Iran, China, and Serbia have committed election interference with the United States of America elections.
General Michael Flynn said, “On the 30th of November, 2020, the FBI and the homeland cyber security agency came out and said that on the 30th of October, 2020, and the 3rd of November, 2020, both, in what is called an intelligence advisory, the FBI and CSA issued an advisory that Iran is mucking around in our election system.  They were doing it on the third of November which is the day of the election. The FBI and the Dept. of Homeland Security both said there is foreign interference in our election, on election day by the country of Iran.”

All President Trump had to do was exercise some of those procedures that are within that order…and to believe he did not, would be very off the mark. President Trump always follows through.
This is a very serious threat and this nation is definitely under attack by foreign nations. Due to the magnetude of the situation, it will take extreme secrecy in the military strategies to arrest this situation and take care of all the players involved.
This is not just about an election with home grown domestic fraud. This is about a deep state coup involving foreign nations and a foreign corporate cabal operated out of D.C., designed to overthrow the US presidency and bring the people of the United States under totalitarian control. We’ve already witnessed the executive orders and heard the cries to arrest conservatives and Christians for their radical views and peaceful protests that are, in their view, threatening their democracy. The news has sickened the stomachs of millions just to hear the report.
Meanwhile, rest assured the military is in charge. Fake news and the media can squawk all they want and Joe can sign all the pieces of paper he likes. The writing is on the wall that the military has other plans.
So while photos are floating around the internet showing no guards are posted in front of the White House and the lights are out, President Trump is at Mar-a-lago, with lights on and covered with guard. Warrior 32 posted that his home in Palm Beach has a historical history of being the “winter White House”.

Ironic? Or meant to be? There are quite a lot of safety features and bunkers there. The Ironic History of Mar-a-Lago | History | Smithsonian Magazine
Meanwhile Newsmax covered a story on the CEO and showed this picture. It looks like he was getting off Airforce Done…and has some undercover, non saluting by standers. Maybe just in case he falls, they will catch him? 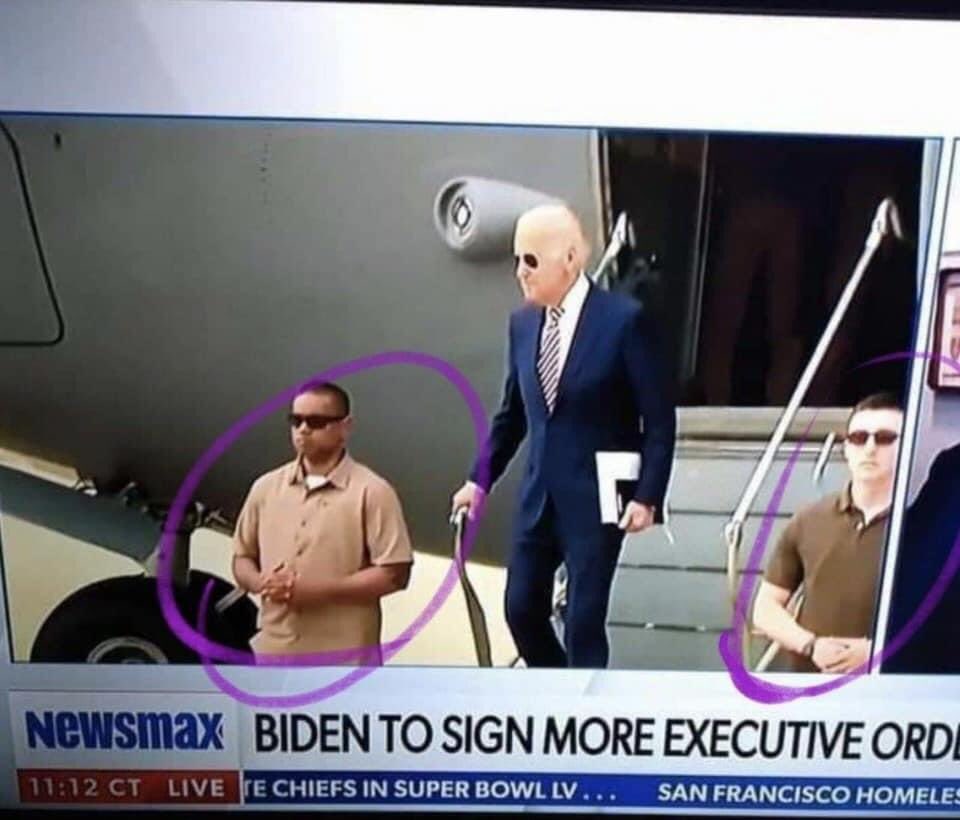 Did they release this picture This looks like something out of Saturday Night Live. But you can decide what program it reminds you of. This is priceless.
Rest assured your President Trump is in good hands.
Pray for peace and safety.
Dianne Marshall

OUT OF MIND » THE INSANITY OF REALITY » GOVERNMENTS & THE NEW WORLD ORDER » GENERAL FLYNN LAYS OUT THE FACTS!