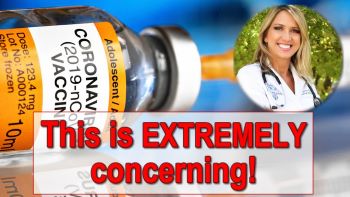 How COVID-19 ‘Vaccines’ May Destroy the Lives of Millions
Analysis by Dr. Joseph Mercola Fact Checked

In April 2020, I interviewed Judy Mikovits, Ph.D., about the potential role played by human gammaretroviruses in COVID-19. Mikovits is a molecular biologist1 and researcher, and was the founding research director of the Whittemore Peterson Institute in Nevada.

Her book, “Plague of Corruption,” ended up being a No. 1 best seller on the lists of The New York Times, USA Today and The Wall Street Journal in 2020. Her new book, “Ending Plague: A Scholar’s Obligation in an Age of Corruption,” will hopefully do just as well. It’s available for preorder on Amazon.


She may be one of the most censored researchers on the planet at this point, thanks in no small part to her participation in the documentary “Plandemic,” which went viral in a big way (plandemicseries.com).

Case in point: YouTube suspended our account for one week as soon as we uploaded today’s interview — even though the video was UNLISTED and not available for public viewing yet. Even worse, Mikovits’ third and most recent book, “The Case Against Masks: Ten Reasons Why Mask Use Should Be Limited,” is so heavily censored, no one can buy it.


“I don't even have a copy,” she says. “I'm sitting here with two copies of the other books but I can't even buy it. What the book sellers did, like Amazon, is they bought them all up from Skyhorse, the publisher, and now they won't ship them out of the warehouse.”

Clearly, Mikovits is considered a serious threat to the technocratic status quo, and once you hear what she has to say about COVID-19 vaccines — which as you’ll see is a complete misnomer — you may start to understand why.

The COVID-19 vaccine really isn’t a vaccine in the medical definition of a vaccine. It does not improve your immune response to the infection, nor does not limit you from getting the infection. It’s really an experimental gene therapy that could prematurely kill large amounts of the population and disable exponentially more.


“I'm just beside myself with anger over this synthetic gene therapy, this chemical poison, and what they're doing worldwide,” Mikovits says. “We're already seeing deaths from this shot. It's illegal. It shouldn't be done. It should be stopped right now. It should have never been allowed to happen, yet we see it being forced on the most vulnerable populations.”

Indeed, news and social media reports suggest recipients are starting to drop like flies. Many die of unknown causes within days, sometimes hours of getting the first or second shot.

Baseball legend Hank Aaron passed away two weeks after receiving the vaccine, yet this was not ever mentioned in his New York Times obituary. Surely, had he tested positive for SARS-CoV-2, he would have been declared a COVID-19 fatality, whether the virus actually had anything to do with it or not.

But when it comes to the vaccine, even eyebrow-raising timing is dismissed as coincidental and irrelevant. Now all of a sudden, old people dying shortly after vaccination are shrugged off with the excuse that they’re old and could have died any day anyway. Old people dying with SARS-CoV-2, however, must be stopped at any cost. Funny how that works.

The Problem With Synthetic RNA

In 2017, Stat News discussed Moderna’s challenges in developing an mRNA-based drug for Crigler-Najjar, a condition that can lead to jaundice, muscle degeneration and brain damage:3


“In order to protect mRNA molecules from the body’s natural defenses, drug developers must wrap them in a protective casing. For Moderna, that meant putting its Crigler-Najjar therapy in nanoparticles made of lipids.

And for its chemists, those nanoparticles created a daunting challenge: Dose too little, and you don’t get enough enzyme to affect the disease; dose too much, and the drug is too toxic for patients.

From the start, Moderna’s scientists knew that using mRNA to spur protein production would be a tough task, so they scoured the medical literature for diseases that might be treated with just small amounts of additional protein.

‘And that list of diseases is very, very short,’ said the former employee … Crigler-Najjar was the lowest-hanging fruit. Yet Moderna could not make its therapy work ... The safe dose was too weak, and repeat injections of a dose strong enough to be effective had troubling effects on the liver in animal studies.”

However, if they call their drugs vaccines, they can bypass the safety studies. All of a sudden, they expect us to believe that all of these safety issues have been resolved? Another problem is related to how long the mRNA remains stable in your system. It’s encased in nanolipid to prevent it from degrading too rapidly, but what happens if the mRNA degrades too slowly, or not at all?

The idea behind mRNA vaccines is that by tricking your body into creating the SARS-CoV-2 spike protein, your immune system will produce antibodies in response. But what happens when you turn your body into a viral protein factory, thus keeping antibody production activated on a continual basis with no ability to shut down?

In addition, your body sees these synthetic particles as non-self and much of the perpetual antibody response will be autoantibodies attacking your own tissues. Mikovits explains:

So, taking a synthetic messenger RNA and making it thermostable — making it not break down — [is problematic]. We have lots of enzymes (RNAses and DNAses) that degrade free RNA and DNA because, again, those are danger signals to your immune system. They literally drive inflammatory diseases.

Now you've got PEG, PEGylated and polyethylene glycol, and a lipid nanoparticle that will allow it to enter every cell of the body and change the regulation of our own genes with this synthetic RNA, part of which actually is the message for the gene syncytin …

Syncytin is the endogenous gammaretrovirus envelope that's encoded in the human genome … We know that if syncytin … is expressed aberrantly in the body, for instance in the brain, which these lipid nanoparticles will go into, then you've got multiple sclerosis.

It dysregulates not only the immune system, but also the endocannabinoid system, which is the dimmer switch on inflammation. We've already seen multiple sclerosis as an adverse event in the clinical trials, and we're being lied to: ‘Oh, those people had that [already].’ No, they didn't.

We also see myalgic encephalomyelitis. Inflammation of the brain and the spinal cord, which is [associated with] exogenous gammaretroviruses, the XMRVs.”

According to Mikovits, research shows 4% to 6% of Americans have already been infected with XMRV gammaretroviruses via contaminated vaccines and blood supply for more than three decades, which is driving a number of chronic health conditions. Now, these synthetic gene therapies (the so-called COVID-19 vaccines) will further add to the chronic disease burden by triggering myalgic encephalomyelitis.

Anyone with an inflammatory disease like rheumatoid arthritis, Parkinson's disease, chronic Lyme disease, anybody with an acquired immune deficiency from any pathogens and environmental toxins, those are the people who will be killed, murdered, by this vaccine. ~ Judy A. Mikovits, Ph.D.

Making matters worse, the synthetic mRNA also has an HIV envelope expressed in it, which can cause immune dysregulation. “This is a nightmare,” Mikovits says. “I'm angry, as this should never be allowed.”

As we discussed in previous interviews, SARS-CoV-2 has been engineered in the lab with gain-of-function research that included introducing the HIV envelope into the spike protein.

Mikovits’ hypothesis is that those who are most susceptible to severe neurological side effects and death from the COVID-19 vaccines are those who have previously been injected with XMRVs, borrelia, babesia, mycoplasma, through contaminated vaccines, resulting in chronic disease. (Her book, “Plague of Corruption,” details the science and history of XMRVs, which is a fascinating read.)


“Yes, absolutely,” she says. “That's one of our hypotheses. But also, anyone with an inflammatory disease like rheumatoid arthritis, Parkinson's disease, chronic Lyme disease, anybody with an acquired immune deficiency from any pathogens and environmental toxins.

Those are the people who will be killed, murdered, by this vaccine, and Anthony Fauci knows it … I can't even sleep [because of] how evil this is. This is so deadly, I can't scream it loud enough from the rooftops.”

The chart below lists 35 diseases associated with XMRV infection. If you have any of these, you may want to think long and hard before you line up for an mRNA COVID-19 vaccine, as your chances of severe side effects or death are likely far higher than someone who does not have any of these diseases. 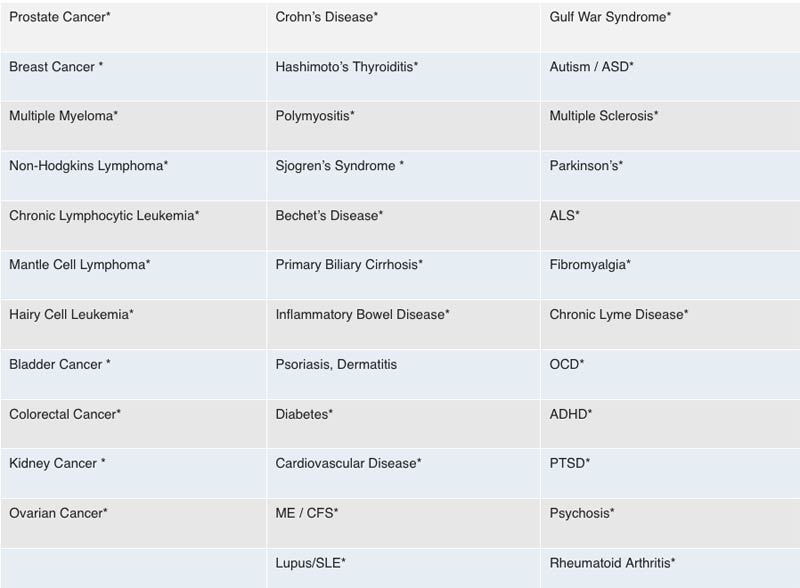