The Great Reset Wall of America 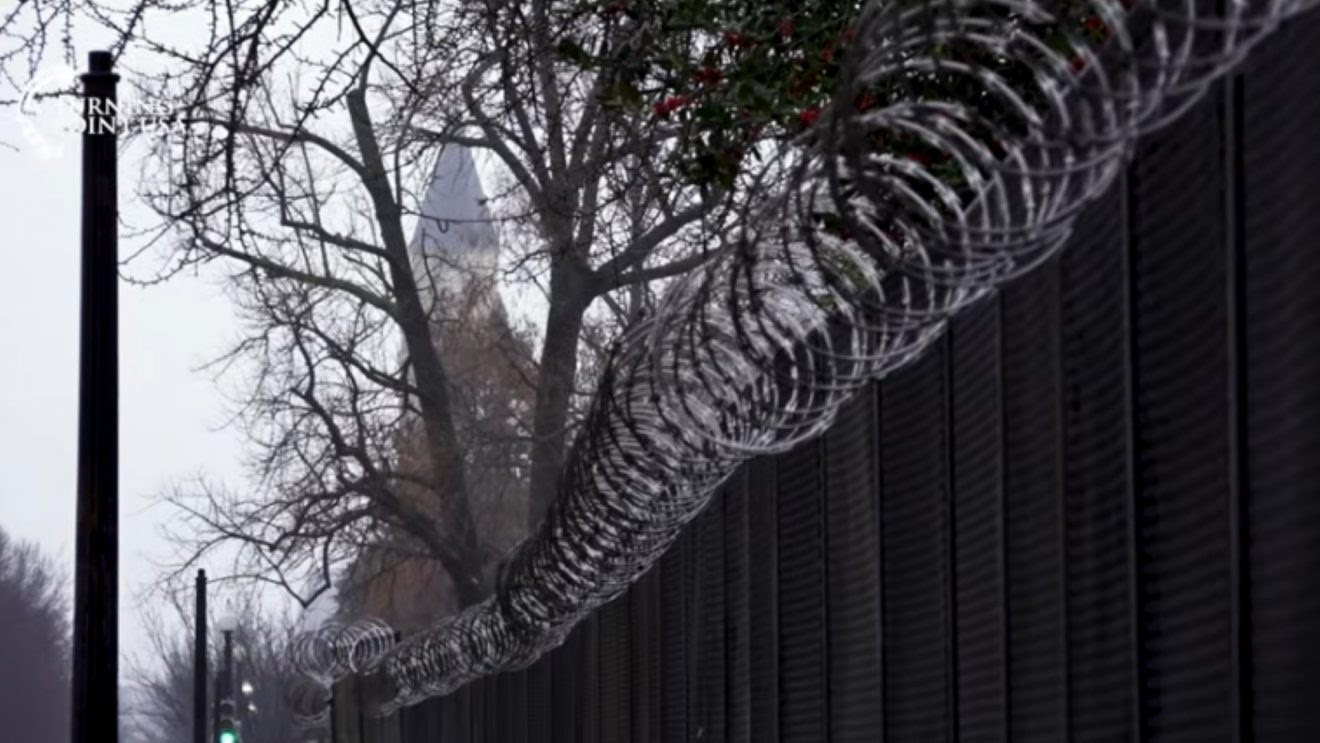 Sometimes, especially these days when the average American is completely asleep and indifferent to the totalitarian takeover of this country, reality is so obvious as to border on the insane. I am not discussing the idiotic Trump or Biden argument, as believing in a master is simply a way to remain a slave. The political system in this country is an atrocity, no different than it has been over at least the last century. We are staring at total tyranny that has been incrementally established by this evil governing system over the past 240 years. This was by design, but it has been fast-tracked at lightening speed over this past year, and now the final push toward global technocratic rule is firmly in place.
One look at the U.S. Capital in Washington D.C. should be enough for anyone, even those with only a modicum of intelligence, to finally understand that this country is a fascist oligarchy on its way to becoming a dictatorial Communistic technocracy. Miles and miles of extreme steel and concrete supported fencing with razor wire has been erected around the entire Capital grounds and all its government buildings. This fence looks to be 12 feet high in places, and 8 feet high around the perimeter. This is very disturbing, as it looks little different than the fencing surrounding North Korea.

This wall is secured with heavy concrete and steel with steel supports deep into the ground. This is a serious fence, and something that would only be seen in a country run by a dictatorial regime scared of its own people. It is guarded by heavily armed military personnel, and manned 24 hours a day. Heavy equipment, trucks, and armored vehicles are present around this fortress, all so the politicians can be secure from the people that elected them.
This wall was put up almost overnight with very expensive and state of the art materials. This had to be planned long in advance, and the materials had to be secured, stored, and ready to ship, and then build, in a very short amount of time. What this indicates is that everything that has taken place was also planned well before anything happened at the staged presidential selection on January 6th. This was not done for any worthless inauguration.
Everything the government does is by design, and has been discussed and plotted long before any event takes place. Nothing is natural or responsive, it is simply a plot. This was no different. Understanding that this is so, and then seeing this in action should alarm every single citizen. This was done for a reason because the ruling class knows what is coming, and they expect this apathetic population to be too stupid, or too concerned about a fake virus to recognize it in time. Why else would they want to protect themselves from the people they pretend to represent with such extreme measures?
It is my opinion that this is telegraphing that something of epoch proportion is going to happen. They are not afraid of a riot, they are afraid of an uprising. Since the people have done almost nothing so far to protect their own freedom, what is coming that could cause that to change? What does this heinous government know that we do not?
When a country’s Capital looks like it is preparing for war, it probably is. Are they planning a war against foreign forces, or are they planning a war at home? That fence will not protect them from bombs, it can only keep out this citizenry. Something sinister is at hand. Is martial law on the horizon? Is it a biowarfare attack? Are real toxic pathogens about to be released on the public? Or do they understand that the coming policies that they plan to implement will ignite a civil war? This is a sign, and it should not be ignored!