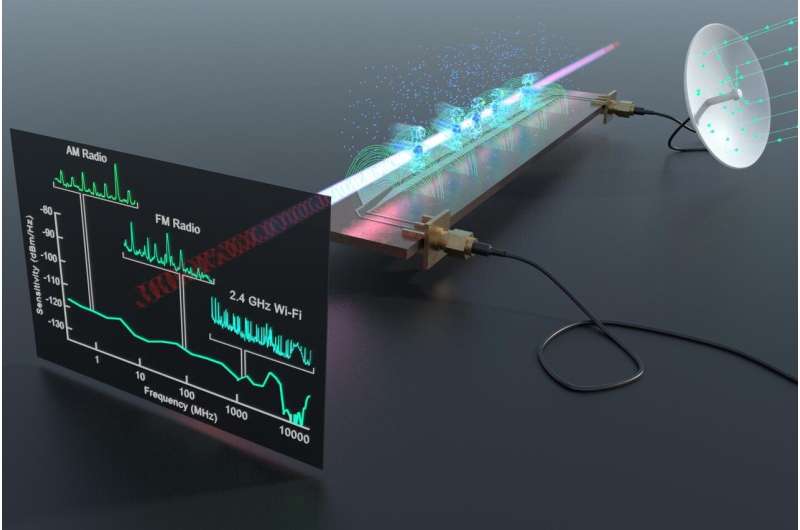 Army researchers built the quantum sensor, which can sample the radio-frequency spectrum—from zero frequency up to 20 GHz—and detect AM and FM radio, Bluetooth, Wi-Fi and other communication signals.
The Rydberg sensor uses laser beams to create highly-excited Rydberg atoms directly above a microwave circuit, to boost and hone in on the portion of the spectrum being measured. The Rydberg atoms are sensitive to the circuit's voltage, enabling the device to be used as a sensitive probe for the wide range of signals in the RF spectrum.
"All previous demonstrations of Rydberg atomic sensors have only been able to sense small and specific regions of the RF spectrum, but our sensor now operates continuously over a wide frequency range for the first time," said Dr. Kevin Cox, a researcher at the U.S. Army Combat Capabilities Development Command, now known as DEVCOM, Army Research Laboratory. "This is a really important step toward proving that quantum sensors can provide a new, and dominant, set of capabilities for our Soldiers, who are operating in an increasingly complex electro-magnetic battlespace." 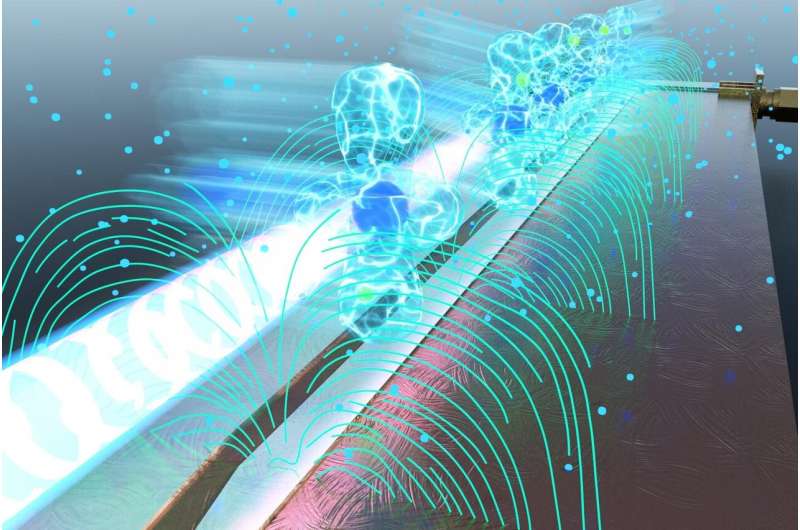 Researchers excite Rubidium atoms to high-energy Rydberg states. The atoms interact strongly with the circuit's electric fields, allowing detection and demodulation of any signal received into the circuit. Credit: U.S. Army illustration
The Rydberg spectrum analyzer has the potential to surpass fundamental limitations of traditional electronics in sensitivity, bandwidth and frequency range. Because of this, the lab's Rydberg spectrum analyzer and other quantum sensors have the potential to unlock a new frontier of Army sensors for spectrum awareness, electronic warfare, sensing and communications—part of the Army's modernization strategy.
"Devices that are based on quantum constituents are one of the Army's top priorities to enable technical surprise in the competitive future battlespace," said Army researcher Dr. David Meyer. "Quantum sensors in general, including the one demonstrated here, offer unparalleled sensitivity and accuracy to detect a wide range of mission-critical signals."
The peer-reviewed journal Physical Review Applied published the researchers' findings, Waveguide-coupled Rydberg spectrum analyzer from 0 to 20 GigaHerz, co-authored by Army researchers Drs. David Meyer, Paul Kunz, and Kevin Cox 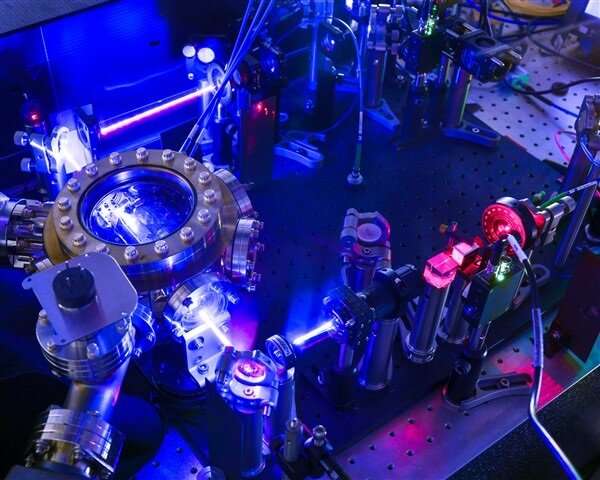 Researchers use a Rydberg spectrum analyzer experimental apparatus at the DEVCOM Army Research Lab. Credit: U.S. Army
The researchers plan additional development to improve the signal sensitivity of the Rydberg spectrum analyzer, aiming to outperform existing state-of-the-art technology.
"Significant physics and engineering effort is still necessary before the Rydberg analyzer can integrate into a field-testable device," Cox said. "One of the first steps will be understanding how to retain and improve the device's performance as the sensor size is decreased. The Army has emerged as a leading developer of Rydberg sensors, and we expect more cutting-edge research to result as this futuristic technology concept quickly becomes a reality."