OUT OF MIND » QUESTION EVERYTHING - DISCERNMENT REQUIRED » ELON MUSK » Bitcoin and Its Discontents: What Elon Musk is Telling Us

Bitcoin and Its Discontents: What Elon Musk is Telling Us

Source: William Levin
For years folks have debated the value of bitcoin. Warren Buffett has declared it a gigantic hoax. Economists have struggled to see if it fits in the convention of money. Is it a store of value or a medium of exchange? One theory argues its value tracks the number of users, a social network effect. Promoters of course see it as the future, giving rise to its own word, hodl, which means to hold for the long-term.
Recently, major banks have belatedly begun to suggest there is a long-term value to bitcoin, first and foremost based on its substitution over time for gold, and ultimately as an alternative asset class, supported by its improving use as a money substitute. While institutional bitcoin ownership is estimated to currently stand at less than 1%, that too seems in the process of change.
But now the debate has been settled.  Elon Musk, our new arbiter of all that is in and out, has purchased $1.5 billion in bitcoin and announced that Tesla plans to accept it as payment.  Bitcoin predictably has jumped to a record high, in excess of $46,000, and now is up more than eight-fold in the past year.

Source: Investopedia
Regardless of whether bitcoin in the short-term gyrates unpredictably in value, it is timely to ask not what bitcoin is worth, but what its valuation tells us about ourselves.
The enduring beauty of bitcoin lies in its origin. It is typically defined as a peer-to-peer digital currency whose ownership is recorded in a secure account ledger, known as a blockchain. Lose the private key to access this ledger, as reportedly many early buyers have done, and the investment is lost forever, even if it amounts to millions, or now even billions of dollars.
The key missing word here is government. Whatever else it is, bitcoin at its core is a deeply thought-out protest medium. No permission is sought from the government for its creation, its valuation or its internal rules. It is peer to peer, meaning it existence and trade is purely between individuals.  What better definition of freedom.
From this perspective, bitcoin’s meteoric rise sends the clearest of messages. People distrust government. Deeply. The more the distrust, the higher bitcoin will rise.
Now what could ever give people reason to so distrust government that they seek an asset outside its reach?  Independent of one’s politics, the question seems almost quaint today.
It is no accident that bitcoin’s recent rise exactly tracks the Covid crisis. Except for the miracle of the vaccine, the governmental response had been thoroughly detached from science. Common sense has shown people that the disease, while serious, overwhelming attacks the elderly and those with comorbidities. Public policy should have protected these people, while preserving the freedom and livelihoods of everyone else.  That has not happened.  Now we all must endure the slow vaccine roll out and its daily reminder of the sclerotic hand of government.
The US election is independently fueling a generalized conviction that we have lost our way. In Joe Biden, we have a weakened President that few authentically support and who is widely regarded as the scripted caretaker for an agenda directed by others. After signing a mind-numbing 35 executive orders in 10 days, it is apparent the administration will seek to enforce policies far to the left of the US electorate.  The unholy alliance of big business and big tech seems, if anything, to be gathering ever more force, the recent reddit rebellion notwithstanding.  Election laws are certain to remain in disarray.
For those focused on the longer view, it is beyond debate that the U.S. has reached a point of no return with respect to fiscal discipline. Official debt has skyrocketed from 35% of GDP in 2007 to 98% currently.  By 2050, according to the non-partisan Congressional Budget Office, it will rise to 195% of GDP, with interest expense alone consuming the discretionary budget, a ruinous state of affairs. And that is before the Biden administration cavalierly adds $1.9 trillion by the end-run device of a budget reconciliation, voted out 51-50 with the tie-breaking vote from Vice-President Harris.   Eventually the debt we are unable to repay and cannot afford will bring this country to its knees, not today, but for sure tomorrow.

Add in the biblical prospects for war, terror and pestilence, a weakened, economically hollowed out Europe, an ever more powerful, disruptive, and bellicose China, and whatever economic black swans lay in store, and there you have the true reason for bitcoin’s rise.

Anyone foreseeing events to unexpectedly work out for the best, no need to buy bitcoin. For the rest, don’t act so shocked that some, perhaps soon to be many, people see danger ahead, and want some kind of shelter, however imperfect.

Bitcoin is indeed imperfect in one vital respect. By its charter, assuming no changes, only 21 million bitcoins can be created, of which 18 million are in existence today.
By most accounts, these 18 million bitcoins are held by relatively few, meaning there is insufficient trading supply to meet broad-based demand, and mystery attaches to these de facto owners of bitcoin and their intentions.  That in part explains the equally shocking one-year surge in Ethereum from $260 to $1,700.  A rising tides lifts the cybercurrency ships, at least until the market sorts out the terrain.For existing investors, that is the good news. For new would-be investors, the inherent short-term volatility of bitcoin merits high caution. As an outlet for societal fear, bitcoin has far too little liquidity.
In the long-run, demand creates supply and one way or another vehicles will be created to meet the demand for peer-to-peer currencies and blockchain applications outside government control. In response, governments will react with regulation. That battle is on.
But the overall message is discouraging. Bitcoin’s rising valuation is a measure of our collective distress.
You still want to bet against bitcoin in the long run? 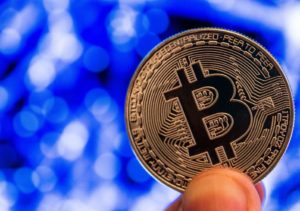 OUT OF MIND » QUESTION EVERYTHING - DISCERNMENT REQUIRED » ELON MUSK » Bitcoin and Its Discontents: What Elon Musk is Telling Us

» Elon Musk Just FACT-CHECKED Hillary Clinton About The Truth of the Paul Pelosi Attack — AND ELON IS RIGHT- THE WEBSITES WERE CREATED AFTER THE ATTACK!
» Elon Musk - I Can't Believe It's Not Human!
» Elon Musk Exposed
» Elon Musk - “We will coup whoever we want! Deal with it.”
» Elon Musk is Officially a TWIT