“We continue to seek his extradition” 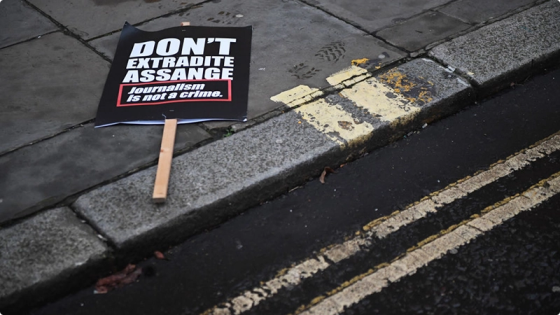 Source: RT
The Fraudulent Joe Biden administration will continue to pursue extradition for Julian Assange, the Justice Department said, rebuffing calls from rights groups to reverse course ahead of an appeal deadline in the WikiLeaks co-founder’s case.
DOJ spokesman Marc Raimondi said on Tuesday that Washington has not abandoned plans for Assange’s extradition from the UK, noting that Biden will still challenge a January ruling from a British judge barring extradition over concerns that Assange might take his own life in American custody.
We continue to seek his extradition,” Raimondi told Reuters, signaling that the new Biden administration will pick up where ex-president Donald Trump left off in seeking to charge the anti-secrecy activist for his publication of classified documents.
The statement from the DOJ comes mere days before a February 12 deadline for the US government to submit its “grounds for appeal” in Assange’s extradition case, in which American attorneys will argue against UK Judge Vanessa Baraitser’s ruling against the move.
Calls on Washington to abandon the Assange case picked up momentum in the waning days of the Trump presidency, with activists and journalists across the political spectrum demanding he pardon the WikiLeaks publisher before his term was up. While Trump ultimately refused to grant clemency, much of the same pressure has carried over to the Biden administration, illustrated most recently in a letter from some two dozen civil liberties organizations condemning the indictments against Assange as a “grave threat to press freedom.”
“The indictment of Mr. Assange threatens press freedom because much of the conduct described in the indictment is conduct that journalists engage in routinely – and that they must engage in in order to do the work the public needs them to do,” said Monday’s letter, organized by the Freedom of the Press Foundation and signed by the ACLU, Amnesty International and the Committee to Protect Journalists, among others.
“News organizations frequently and necessarily publish classified information in order to inform the public of matters of profound public significance.“ 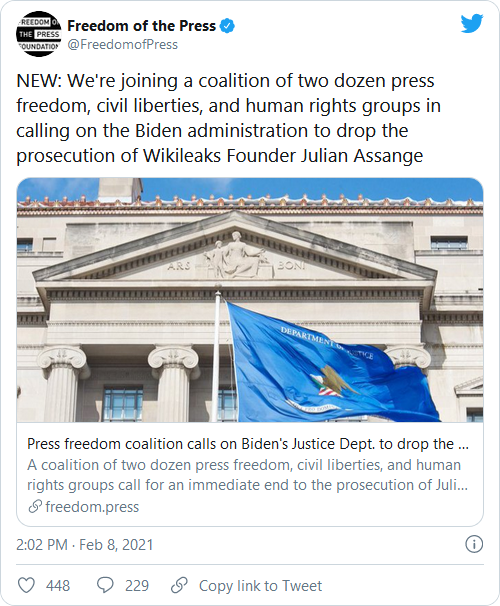 The letter, addressed directly to Biden’s DOJ, echoed a similar argument accepted by former president Barack Obama, who declined to charge Assange during his eight years in office on the grounds that WikiLeaks’ activities were too close to standard journalistic conduct. Biden, who served as vice president under Obama, appears to have abandoned that stance, instead following through on Trump’s extradition drive.
Assange faces 17 criminal counts under the Espionage Act for his role in publishing classified material, including hundreds of thousands of pages of documents that made up the Iraq and Afghan War Logs, as well as the infamous ‘Collateral Murder’ video, which shows a US gunship firing on a crowd of Iraqi civilians – some of them journalists – in 2007. He is currently in custody at London’s maximum security Belmarsh prison, where he awaits the conclusion of his extradition trial.