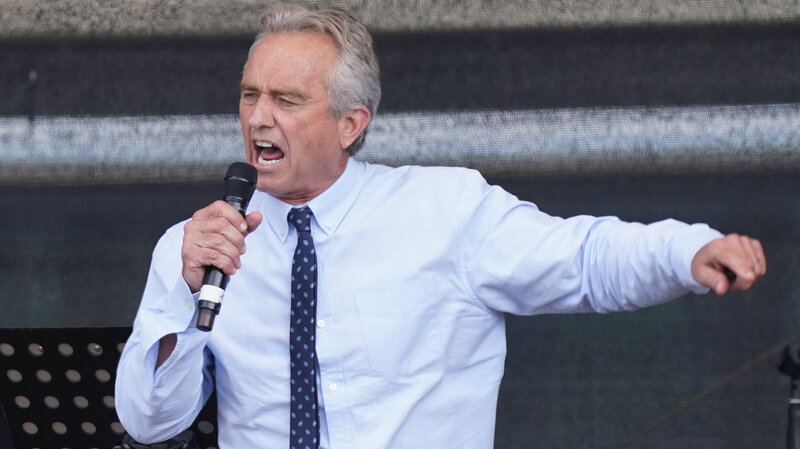 Instagram has blocked the account of Robert F. Kennedy Jr., saying he used it to spread misinformation about vaccines. He's seen here last summer, speaking to a crowd in Berlin, at an event that highlighted coronavirus skepticism and conspiracy theories.
Sean Gallup/Getty Images
Robert F. Kennedy Jr. is now blocked from Instagram after he repeatedly undercut trust in vaccines. Kennedy has also spread conspiracy theories about Bill Gates, accusing him of profiteering off vaccines and attempting to take control of the world's food supply.
"We removed this account for repeatedly sharing debunked claims about the coronavirus or vaccines," a spokesperson for Facebook, which owns Instagram, told NPR on Thursday.
Kennedy has been a prominent voice in the anti-vaccine community for years, speaking out against childhood vaccines and promoting controversial and disproven claims that seek to link vaccines with autism.
In the past year, Kennedy's beliefs about vaccines have intersected with the COVID-19 pandemic. He has told his followers not to trust "mainstream media, government health officials" and doctors who say the coronavirus vaccines are safe, recently highlighting a rare and tragic case in which a woman died hours after receiving the vaccine. 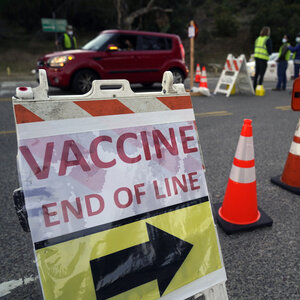 Kennedy is the son of the late Robert F. Kennedy, the former attorney general and senator. He has been praised for his environmental activism and conservation efforts. But even before the COVID-19 pandemic, Kennedy's stance on vaccinations prompted some in his high-profile family to publicly repudiate his ideas.
"We love Robert F. Kennedy Jr., but he is part of a misinformation campaign that's having heartbreaking — and deadly — consequences," Kathleen Kennedy Townsend, Joseph P. Kennedy II and Maeve Kennedy McKean wrote in an opinion piece for Politico. Vaccination campaigns, they noted, save millions of lives every year.
Article continues after sponsor message

Kennedy has shown no intention of listening to his critics, warning that the new mRNA technology that created some of the first SARS-CoV-2 vaccines is untested and can cause serious health problems. Dr. Anthony Fauci, the country's top infectious disease expert, has received the vaccine, saying scientific advances allowed it to be developed and approved less than one year after the novel coronavirus was identified.
"It would be terrible, with a tool as good as that, if people don't utilize that tool," Fauci said, citing the vaccine's efficacy rate of about 95% in preventing disease.
Kennedy's Twitter account remains active, showing that he recently highlighted claims that an HPV vaccine caused infertility and slurred speech. When contacted by NPR, a Twitter representative said the company is reviewing Kennedy's account. 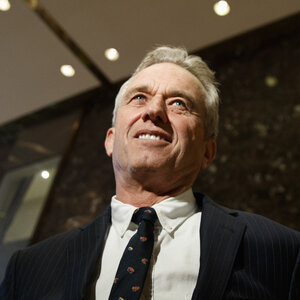 Despite The Facts, Trump Once Again Embraces Vaccine Skeptics

Kennedy has also stepped up his attacks on Bill Gates, saying earlier this week that the billionaire wants "to create a new feudalism on this planet." Gates' push to supply more vaccines through his philanthropic foundation, Kennedy said, is merely cover for a lucrative plan to ensure that the world relies on technology.
In early 2017, Kennedy met with then-President-elect Donald Trump, urging him to create a commission to study vaccines' safety. It was an instance, as NPR reported at the time, of "Trump embracing the fringe when it comes to the science of autism and vaccinations."

In response to that meeting, the American Academy of Pediatrics issued a statement saying "vaccines protect children's health and save lives."
In addition to Kennedy's account, Facebook says it has taken down a number of other accounts on both Instagram and Facebook, including We Are Vaxxed, which 154,000 people had liked, and Americans Unite 4 America, a pro-Trump group that had roughly 31,000 members.
The social media company says all of the pages violated its recently updated policies on false claims and misinformation about vaccines.
Editor's note: Facebook is among NPR's financial supporters.

RFK, Jr. Responds to Instagram’s Removal of His Account
Posted on February 11, 2021 
Children’s Health Defense (CHD), including Kennedy, advocates for vaccine safety and health freedom. CHD’s mission is to end childhood health epidemics by exposing the causes, eliminating harmful exposures, holding those responsible accountable and seeking justice for those harmed.
As Kennedy has said many times, for a democracy to function, civil debate of issues —  including vaccine science — must be allowed. Censorship of that debate is anathema to democracy.
Kennedy and Mary Holland, CHD president and general counsel, issued the following statements on Instagram’s removal of Kennedy’s account:
Robert F. Kennedy, Jr., Chairman of Children’s Health Defense, said:
“Every statement I put on Instagram was sourced from a government database, from peer-reviewed publications and from carefully confirmed news stories. None of my posts were false. Facebook, the pharmaceutical industry and its captive regulators use the term ‘vaccine misinformation’ as a euphemism for any factual assertion that departs from official pronouncements about vaccine health and safety, whether true or not. This kind of censorship is counterproductive if our objective is a safe and effective vaccine supply.
“The pharmaceutical industry is hastily creating vaccines using taxpayer money and untested technologies. These include a rash of risky new products that are exempt from liability, from long-term safety testing and that have not received FDA approval. Emergency Use Authorization is a mass population scientific experiment. If it has any prayer of working, it will require extraordinary scrutiny from the press and the public.
“Instead, the mainstream media and social media giants are imposing a totalitarian censorship to prevent public health advocates, like myself, from voicing concerns and from engaging in civil informed debate in the public square. They are punishing, shaming, vilifying, gaslighting and abolishing individuals who report their own vaccine injuries.

“Anyone can see that this is a formula for catastrophe and a coup d’état against the First Amendment, the foundation stone of American democracy.”
Mary Holland, President of Children’s Health Defense, said:
“Freedom of expression is the cornerstone of democracy. Children’s Health Defense and Robert F. Kennedy, Jr. provide critically needed information on environmental culprits, including vaccines, that are linked to many chronic diseases that now affect 54% of America’s children. Dr. Anthony Fauci has made it clear that young children will be included in COVID-19 vaccination plans even though children have almost zero risk of serious COVID-19 illness. CHD feels strongly that children should not take on 100% risks of vaccine injuries with 0% benefit.
“The sad reality is vaccine injuries can and do happen. The U.S. Vaccine Adverse Event Reporting System (VAERS) database has more than 11,500 COVID-19 vaccine adverse event reports including more than 500 deaths in just six weeks since the vaccination campaign began. Why would Instagram censor Robert F. Kennedy, Jr.’s platform and call it ‘misinformation’? Why now?
“Instagram deplatformed Robert F. Kennedy, Jr. and Hirewire host, Del Bigtree, just 15 minutes before they were to air the webinar, ‘COVID Vaccine on Trial, If You Only Knew’ highlighting COVID concerns, injuries, mechanisms and other facts from four MDs, several Ph.D.s and leaders from the vaccine-injured community. COVID-19 vaccines use novel technology never before used in a human population. With that comes great unknown risks. The people of the world deserve to have this crucial information to protect their health and that of their children.”

Children’s Health Defense
The Children’s Health Defense Team is devoted to the health of people and our planet. Their mission is to work aggressively to reduce exposure to all sources of mercury, hold those accountable who failed to protect our planet and people from unnecessary exposure, restore health to those who have been harmed, and make sure this tragedy never happens again.
They do what they do for many reasons. Some have children who have been injured. Some have seen an injustice and feel the need to step in where others fear to tread. Some are focused on the demand for scientific integrity, others on improving the health of this, and future, generations.