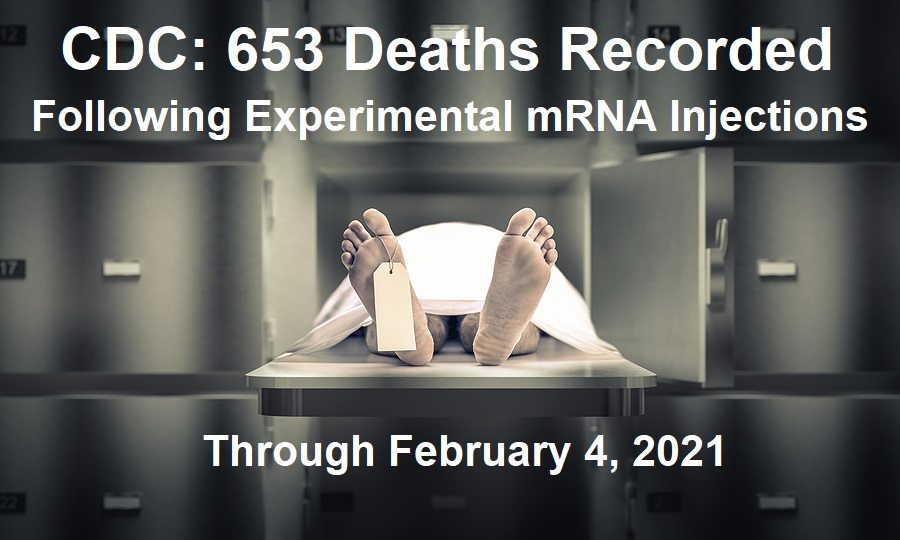 by Brian Shilhavy
Editor, Health Impact News
The CDC has done another data dump today into the Vaccine Adverse Event Reporting System (VAERS), a U.S. Government funded database that tracks injuries and deaths caused by vaccines.
The data goes through February 4, 2021, with 12,697 recorded adverse events, including 653 deaths following injections of the experimental COVID mRNA shots by Pfizer and Moderna. 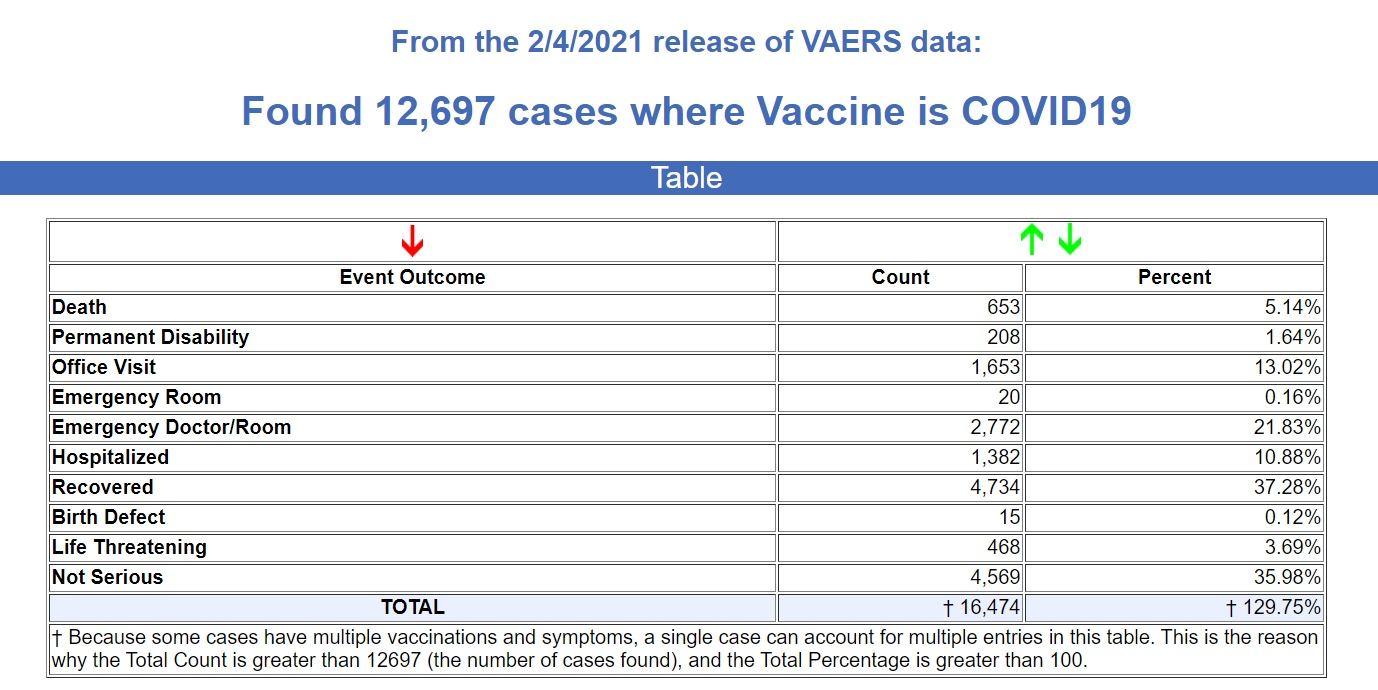 Besides the recorded 653 deaths, there were 2792 visits to Emergency Room doctors, 208 permanent disabilities, and 1382 hospitalizations.

Over 72% of the recorded deaths following the experimental mRNA injections were among people aged 65 or older.
As we have previously reported, because the VAERS reporting system is voluntary, studies show that less than 1% of all vaccine injuries and deaths are recorded.
A 2011 report by Harvard Pilgrim Health Care, Inc. for the U.S. Department of Health and Human Services (HHS) stated that fewer than one percent of all vaccine adverse events are reported to the government:

Although 25% of ambulatory patients experience an adverse drug event, less than 0.3% of all adverse drug events and 1-13% of serious events are reported to the Food and Drug Administration (FDA).
Likewise, fewer than 1% of vaccine adverse events are reported. Low reporting rates preclude or slow the identification of “problem” drugs and vaccines that endanger public health. New surveillance methods for drug and vaccine adverse effects are needed. (Source.)

Earlier this week, we reported on Wisconsin Dr. Sara Beltrán Ponce who lost her unborn baby a few days after receiving one of the experimental mRNA COVID shots. See:

At the time I did a search in VAERS for “Foetal death” following “COVID19 Vaccines,” and there were 3 recorded, including another physician in California who reported a miscarriage.
But with this new data dump today into VAERS, there are still only 3 “Foetal deaths” recorded, meaning Dr. Ponce did not report hers, probably because she refuses to believe the COVID mRNA injection caused it.
In ALL of the deaths and injuries that have followed these non-FDA approved experimental injections that have made their way to media sources that we have reported, health authorities and reporters have claimed that the injections were not responsible.
And this is the official position of the CDC who maintains the database based on the VAERS reporting system. If it were up to the CDC, I am sure they would prefer to not even have a reporting system and database like this.
We owe Barbara Loe Fisher, founder of the National Vaccine Information Center, a great deal of gratitude for fighting to have this system implemented shortly after the 1986 National Vaccine Injury Compensation Program was passed as the law of the land, giving immunity to the pharmaceutical industry from being sued due to vaccine injuries and deaths.
The CDC does not even have a category for “vaccine deaths,” and hence, there has never been a recorded incident on a death certificate of a vaccine death. See: 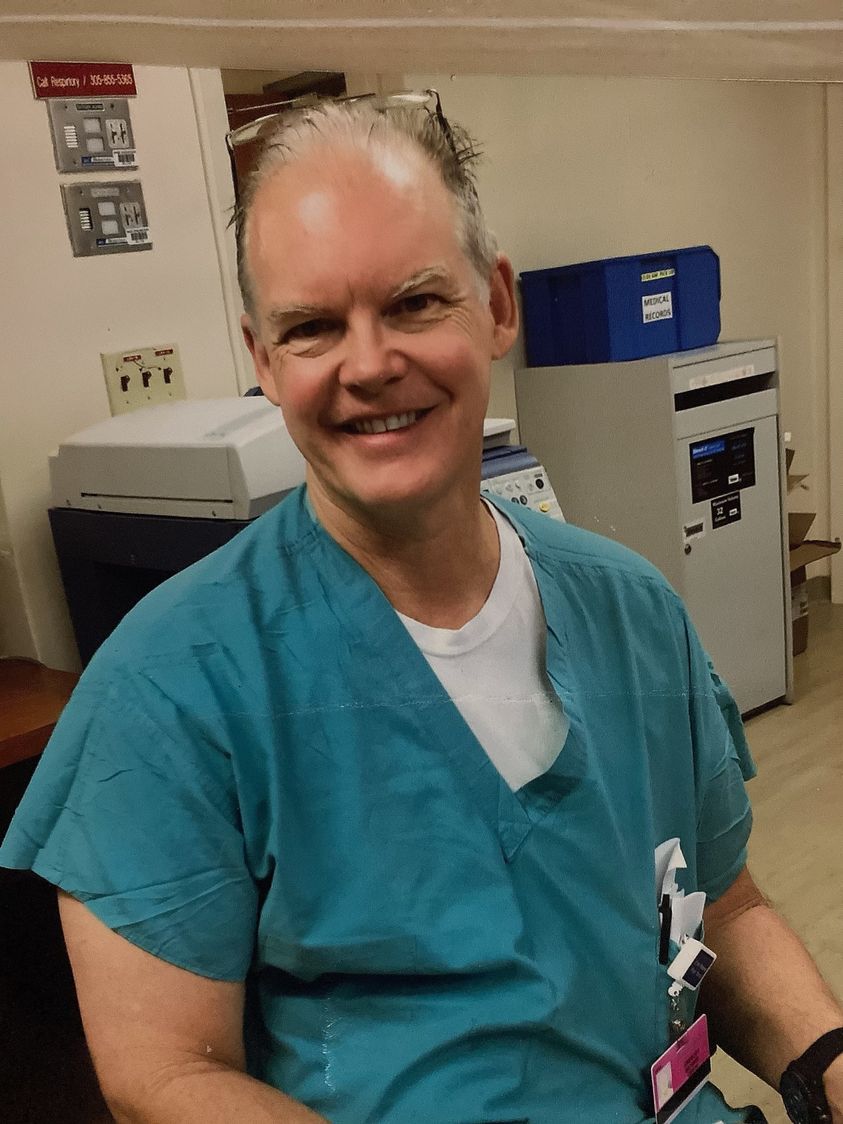 On January 6, 2021, we reported the tragic death of Dr. Gregory Michael, a “very healthy 56-year-old” obstetrician in Florida, who died shortly after a COVID experimental mRNA injection with a rare blood disorder. See:

The blood disorder is reportedly named “Immune Thrombocytopenia,” and according to a New York Times article earlier this week, the CDC is now investigating this disorder due to the fact that 36 other reports have surfaced in the VAERS database following COVID “vaccine” injections.
This NYT article is significant for a couple of reasons.
First, they devoted over 2000 words to the topic, and yet basically reported that there was no evidence that the COVID injections had anything to do with this disorder, because the rate of infection of this disorder is allegedly the same in the general public who have not received the injections.

It is not known whether this blood disorder is related to the Covid vaccines. More than 31 million people in the United States have received at least one dose, and 36 similar cases had been reported to the government’s Vaccine Adverse Event Reporting System, VAERS, by the end of January. The cases involved either the Pfizer-BioNTech or Moderna vaccine, the only two authorized so far for emergency use in the United States.
But the reporting system shows only problems described by health care providers or patients after vaccination, and does not indicate whether the shots actually caused the problems.
Officials with the Food and Drug Administration and the Centers for Disease Control and Prevention said that they were looking into the reports, but that so far, rates of the condition in vaccinated people did not appear higher than the rates normally found in the U.S. population, so the cases could be coincidental. (Source.)

This begs the question then, if this is basically a non-news story, why did one of the most famous news sites in the world devote over 2000 words to the article?
Secondly, there are quite a few other symptoms reported to be associated with the COVID injections that number far more than 36, with no record that the CDC is investigating these other more numerous disorders.
For example, there have been at least three cases that have been published by video on social media and in the alternative media of people having incontrollable seizures or muscle spasms following the COVID injections (these were censored and removed from Facebook and YouTube):