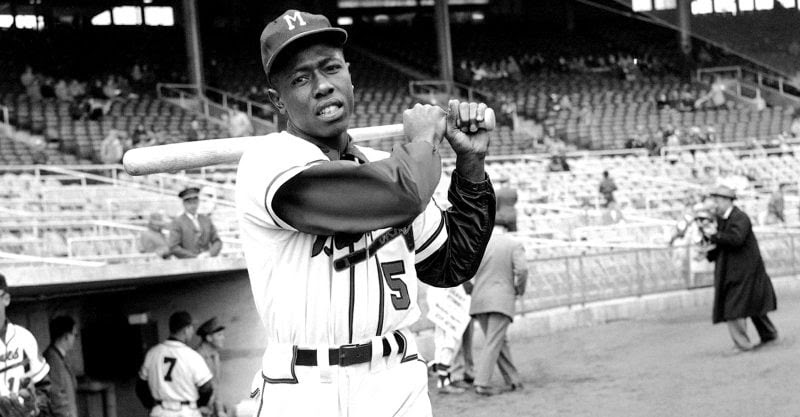 By Robert F. Kennedy, Jr.
The Fulton County medical examiner said the coroner never saw Aaron’s body, much less conducted an examination. By implying that the Fulton County coroner conducted an autopsy, the New York Times and other media outlets deceived their readers.
Late last month, the mainstream media attacked me in a regimented swarm “debunking” my quote in The Defender questioning whether Hank Aaron’s death might have been related to the Moderna COVID-19 vaccine he received 18 days earlier.
I never said that the Moderna shot caused Aaron’s death. I simply made the factual observation that “Aaron’s tragic death is part of a wave of suspicious deaths among elderly closely following administration of COVID vaccines.”
Among the apoplectic hive of “fact checkers” that condemned this statement as “misinformation” were Meet the Press, NBC, The New York Times, The Washington Post, USA Today, Chicago Tribune, Inside Edition and many more.
The Daily Beast headline summarized the media’s moral revulsion at my query: “RFK Jr. Stoops to New Low by Falsely Tying Hank Aaron’s Death to Vaccine.”
Shortly after this high-tech media lynching, Instagram permanently deplatformed my 800,000 follower account.
The New York Times, citing the Fulton County coroner’s office, assured the public that “the Covid vaccine did not kill Hank Aaron.” NBC’s national wire service reported that the Fulton County coroner declared that Aaron’s death was from “natural causes unrelated to the vaccine.”
Fact checkers falsely claimed the coroner exonerated the Moderna vaccine
In an embarrassing disclosure for the mainstream Pharmedia, the Fulton County coroner’s office denies that any of its staff ever saw Aaron’s body, much less conducted an examination. Candace, a medical examiner investigator for the Fulton County coroner’s office, told me, “His body was never here. We declined jurisdiction. There was never any autopsy.”
Candace explained that since Aaron’s personal physician assumed his death was from “natural causes,” there was never any necropsy or postmortem investigation. By implying that the Fulton County coroner conducted an autopsy, the New York Times and other media outlets deceived their readers.
Vaccine deaths are nearly impossible to diagnose
I contacted the Fulton County coroner’s office because the various press denunciations all cited that office as their authoritative source exculpating the vaccine. I was curious to know what cutting-edge test the medical examiner might have performed that would so definitively rule out the vaccine as a contributing culprit.
Under the best circumstances, vaccine injuries are notoriously difficult — if not impossible — to diagnose — so difficult, in fact, that doctors miss MORE than 99% of them, according to a 2010 U.S. Department of Health and Human Services (HHS) study.
Vaccine injuries wear so many guises that nobody even knows what they look like. Manufacturers’ U.S. Food and Drug Administration (FDA)-required product inserts on the 16 vaccines the Centers for Disease and Prevention (CDC) recommends for children list some 400 ways that vaccines can kill or injure people. These include heart attacks, myocardial infarction, strokes, seizures, tachycardia, a long list of allergies and allergic reactions, encephalopathy, anaphylaxis, arteritis, autoimmune injuries, blood clots, brain swelling, systemic inflammation, sudden death and many, many others.
Vaccine injuries and deaths generally result from aggravations of existing comorbidities. But since the vaccine rarely leaves a distinctive fingerprint, there is almost no way to determine if the vaccine triggered the fatal event — even with an extensive autopsy.
The National Academy of Sciences has listed 175 injuries closely associated with vaccines, and concludes that there is insufficient science to exonerate or definitively inculpate any of them.
In cases before the National Vaccine Injury Compensation Program (Vaccine Court), the government routinely takes the reflexive position that something else caused the injuries. The Vaccine Court has nevertheless paid out $4.5 billion for vaccine injuries. The deciding factor in most of these cases is timing; If the injury or death associated with that vaccine occurred within a few days or weeks following inoculation, the court is more likely to assume culpability.
Contrary to the positions of the so-called “Fact Checkers” and others, no one can say that the Moderna vaccine killed Aaron, and no one can rule it out as a culprit.
Placebo studies alone can assess a vaccine’s risks
The only way to accurately assess a vaccine’s risks is through placebo studies — or retrospective studies — that compare health outcomes in vaccinated versus unvaccinated cohorts. These studies must be of sufficient duration to capture injuries with longer incubation periods or diagnostic horizons.
While such studies, properly designed, can tell us if a particular vaccine can cause, for example, heart attacks or strokes, it is virtually impossible to tell if a vaccine caused a particular heart attack or stroke in a specific patient.
Moderna’s clinical trials were inadequate to assess the vaccine’s risks to the elderly
Hank Aaron was 86 years old. The Moderna vaccine trials included no individuals over 80 years old and only 20 individuals over 70. A study of this anemic statistical power could detect no special vulnerabilities in people over 80 and could detect risks only from lethal injuries like heart attacks if they killed more than 1 in 20 vaccine recipients over 70.