OUT OF MIND » THE INSANITY OF REALITY » GOVERNMENTS & THE NEW WORLD ORDER » Republicans, Democrats Call For Cuomo’s Resignation After He Lied About COVID Nursing Home Deaths 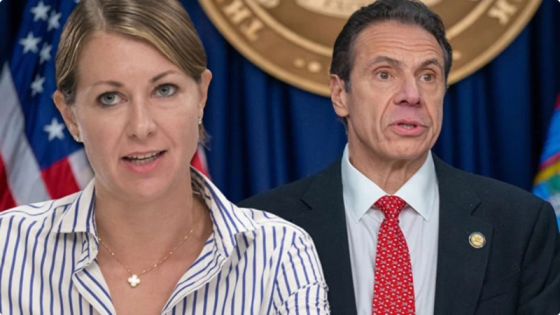 A damning bombshell report reveals that New York’s Governor Andrew Cuomo (D), deliberately held back data about the number of COVID deaths that occurred in New York State nursing homes as a result of his horrific order to place infected patients in those facilities.

Gov. Andrew Cuomo’s top aide, Secretary to the Governor Melissa DeRosa, admitted during a video conference call with New York State Democrat leaders that the Governor’s office willfully reported false numbers on COVID deaths. She issued an apology to the Democrat lawmakers for the action.
“We froze” out of fear, DeRosa said explaining that the Governor believed that releasing the actual numbers would “be used against us” by federal prosecutors in any investigation then-President Donald Trump would insist be initiated.
DeRosa, according to an audio recording of the meeting, said the Cuomo team had snubbed a legislative request for the tally last August because “right around the same time, [then-President Trump] turns this into a giant political football…He starts tweeting that we killed everyone in nursing homes. He starts going after [New Jersey Gov. Phil] Murphy, starts going after [California Gov. Gavin] Newsom, starts going after [Michigan Gov.] Gretchen Whitmer.”


A bombshell the media don't want you to see!

A top aide to Andrew Cuomo reportedly admitted they hid the actual amount of COVID nursing home deaths out of fear from the Trump administration. pic.twitter.com/sKYuTsPf9E
— MRCTV (@mrctv) February 12, 2021

Cuomo’s top aid continued to explain the fear-based decision to lie to both the public and the requesting authoritative bodies saying that in addition to the President demanding accountability from Cuomo’s fellow Democrat governors, he “directs the Department of Justice to do an investigation into us…and basically, we froze.”

The bald-faced lie about the data isn’t the only act of deception that Governor Cuomo and his team are guilty of.
Cuomo’s administration rejected and ignored requests from the news media and fought a Freedom of Information lawsuit filed by the Empire Center on Public Policy, stonewalling all involved on the total number of nursing home residents killed by COVID-19 after Cuomo’s horrendous directive that nursing homes admit infected patients.
The Governor only authorized the disclosure of data on the numbers of residents who died in their nursing homes, knowing he was not honestly reporting mandated data.
US Rep. Elise Stefanik (R-NY), issued a statement saying, “Cuomo, the Secretary to the Governor, and his senior team must be prosecuted immediately – both by the Attorney General of New York State and the US Department of Justice.”
“This bombshell admission of a coverup and the remarks by the Secretary to the Governor indicating intent to obstruct any federal investigation is a stunning and criminal abuse of power,” Stefanik added. “The families who lost loved ones, New Yorkers, and all Americans deserve accountability from the US Department of Justice that will be independent and not swayed by the desperate political pressure from Governor Cuomo.”
US Rep. Andrew Garbarino (R-NY), said “answers and justice” are needed through a “full investigation” by the Justice Department.
“Cuomo not only recklessly put New York seniors in harms’ way, he and his Administration admittedly hid the facts from the Department of Justice,” Garbarino stated. “This, along with the refusal to respect the several Freedom of Information Law requests, turned a misjudgment in policy into what very well may be one of the largest criminal cover-ups in New York’s history.”

In January, the New York Attorney General’s Office revealed in a comprehensive report that the state’s Department of Health undercounted COVID deaths across the New York State nursing home system by roughly 50 percent.

OUT OF MIND » THE INSANITY OF REALITY » GOVERNMENTS & THE NEW WORLD ORDER » Republicans, Democrats Call For Cuomo’s Resignation After He Lied About COVID Nursing Home Deaths