Today at 9:13 pm by PurpleSkyz

Today at 8:13 pm by PurpleSkyz

Today at 8:04 pm by PurpleSkyz

OUT OF MIND » THE INSANITY OF REALITY » GOVERNMENT & THE NEW WORLD ORDER » CALL THEM OUT – DEMAND AN INVESTIGATION – PANDORA’S BOX IS NOW OPENED!

CALL THEM OUT – DEMAND AN INVESTIGATION – PANDORA’S BOX IS NOW OPENED!

Lyndsay Graham stated on Fox News Sunday, today, that now, if the republicans take back the house, Harris may face impeachment based on the standard set for actually bailing out rioters in the country.

Pandora’s box…indeed. Graham states that now Harris may face impeachment based on the standard set for actually bailing out rioters in the country.
I say don’t wait until Dominion voter fraud strikes again. Instead strike while the iron is hot and the deeds are in our face!  We have everything that is needed to go full blown investigation right now! Get to the bottom of who funds, controls, and hires the crisis actors be it ANTIFA or what ever group they want to call it.
After the impeachment and all the perjured evidence presented by Pelosi’s House Managers, isn’t it time to have an investigation into the facts that happened on January 6, 2021? Especially after the letter from the Capitol Police Chief, Steven A. Sund that shows a very different series of events and a very different reason for the entire fiasco where he could not get any back up from the National Guard, in spite of exhausting attempts via chain of command runaround and in spite of asking McConnell to help with his clout to get assistance. The Pentagon didn’t seem to think the chain of command in requesting was proper, or help was needed, or some odd thing?  But, Pelosi was so livid at blaming Trump for the entire thing in spite of receiving the letter of account a week before the impeachment that showed Trump was NOT RESPONSIBLE.

Pelosi stated, “We censor people for using the wrong stationary.” That was very revealing. Indeed she is the Queen of censoring.

Totally Bizarre! #NastyNancy is out of control! She’s like a jilted lover - Will she pursue Trump to the ends of the earth, unjustly!? As an aside, Check out #Swallwell - literally twiddling his thumbs- these ppl are so strange & dangerous to America 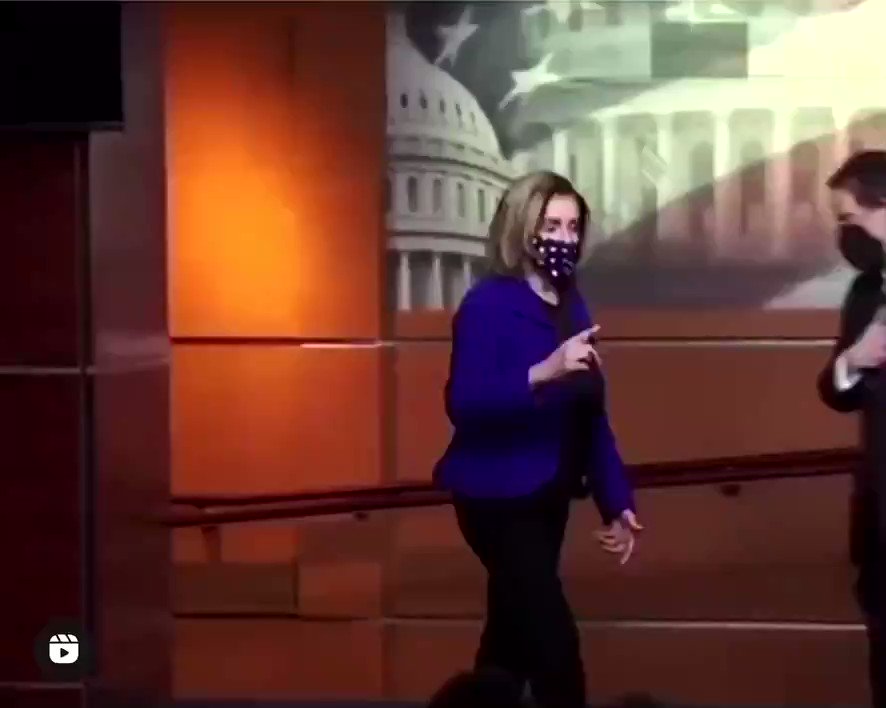 She stated we give him a slap on the hand with her body shaking like a mixed drink in a blender as she rattles on flailing a piece of paper ranting trying to prove some incoherent point.  And her repetitive mocking of how horrible the shouting of “Hang Mike Pence” was, only revealed that she must have thought that part of the gallows on the lawn and the crisis actors shouting “Hang Mike Pence” was a great idea that they should have all bought into.

Which Trump supporter did she specifically have in mind that would have brought that contraption to D.C. and somehow snuck it through the check in point and set it up? Maybe they hid it under their coats?
What she revealed was her willingness to lie, kill, steal and destroy lives, and the fact that her staged event was all for naught. It has boomeranged and hit her in the back of the head. The pact she made with McConnell went south. The back door deal just went main stream – it was brought into the light and now the microscope is upon it all. And so people, what will you do with this gift she has so revealed to the world in her melt down? Will we now demand a full investigation into this account?

Is it just me or is he starting to look like Biden? Is something setting in?  That look when they got you by the billiards.
I say it’s time to call your congress person and Senator and demand a full scale investigation! Demand to know who funded ANTIFA and who bussed them in? Bus’s were sighted and videos of them are available. Signs were posted throughout social media recruiting and organizing this event. There is plenty of video footage showing all the staged photo ops. Good grief, we’ve all been watching these inside shots since it took place. They have a leak in the gas from their gaslighting lamps.
Another interesting thing…
Good points have been made by those commenting regarding  the Babbit death. The fact that there was no mention of it in the United States Capitol Police- Chief Steven A. Sund report. That is very revealing.  Not only was there never a crime scene taped off and investigated, there was never an official coroner announcement, and no death report issued for investigation, at least not in the full and thorough account of events at the Capitol from the Chief of Police Sund in his letter and resignation addressed to Pelosi, and copies sent to Senator McConnell, Senator Schumer, Representative McCarthy, and Representative Hoyer.

Shooter is ready to fire at an empty window…so he must wait a while.

Tubes in place now or what? Investigate it all, stop the gaslighting.
This woman’s death was shouted by the fake news as the deadly shooting inside the Capitol. The news and social media spread this (now apparent lie) day and night. People were shocked, they mourned, they made decisions made on this false flag, premeditated  and out right lie. The entire event was organized and preplanned. Pelosi and her body language, along with her melt down, show the truth about the entire made up for TV false flag event. 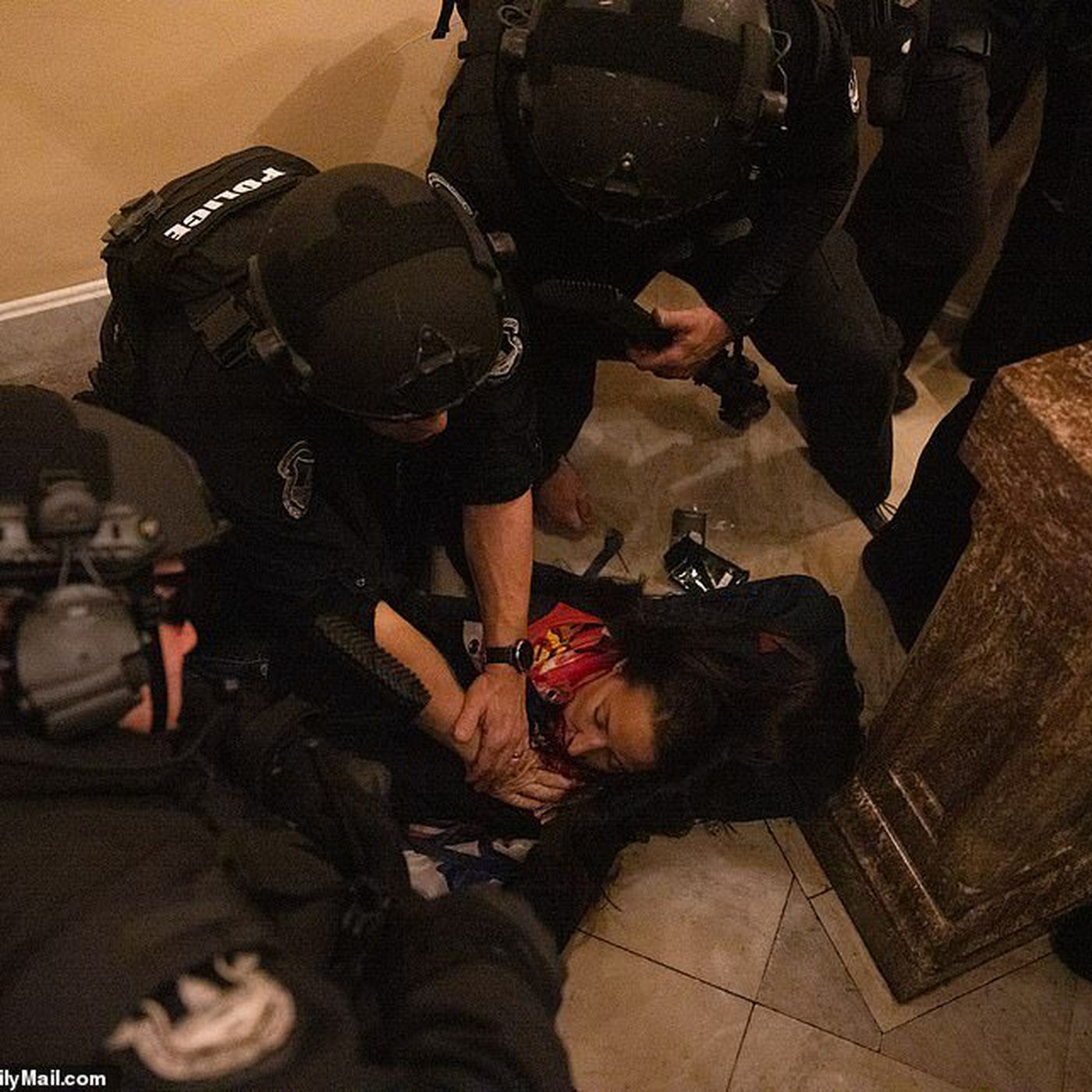 Watch the video they won’t allow on YouTube…. Everything Wrong With The Capitol Shooting In 21 Minutes Or Less (bitchute.com)
Although many pointed out the staged event from the very beginning (myself being among some of the firsts and being told how stupid I was, along with all the others showing the facts.) Videos continued to surface and now some have undeniable proof that the entire crime scene was a staged event.  One in particular takes  a step by step narrated version of all the crisis actors involved and all the tubing and fake blood, how it was coordinated and how it was staged. We see the “Keystone Cops” acting very out of character for police officers….and now we know why. Because they were not Police officers at all.  If they had been, this event, which was the most horrid event at the capitol that day would have been the highlight of the investigation in the report. IT WAS NOT EVEN MENTIONED!

From leaked documents we were never supposed to find, we now know these actors have protocols, and “personality profile assignments” that they are told to stick to. Agitorgs are acting overseers…or so it appears that is what they are. Note the point of contact is D.A. Donnelly. They are not to congregate with other Ops/auxiops in groups of more than two.
Particularly interesting is the language in their instructions. Such as, “Do not under any circumstances deviate from the practices enumerated in this section.” This certainly does NOT SOUND like the language of unorganized street thugs. The entire scope of direction is very corporate to say the least.
These same organizers who designed the City to City marches of destruction, that Pelosi et al supported, are the same organizers who brought the “vandalizism” as Nancy called it, to the D.C. Corporate Capitol.
There are many videos showing the staging inside the capitol, before, during, and after. Many show photo ops and laughter. Pelosi will not get any Emmy Award for the production and maybe that is what she is most unhappy about. Was all this for nothing?  Dang she’s mad (in more ways than one.) Nancy…maybe it will be your Achilles heel.
Who else is behind this staged event?

Remember, President Trump watches EVERYTHING!  TRUST ME, when he says he knows everything,  HE KNOWS EVERYTHING! He has been watching every staged event from the onset of the false flag attacks. All to create chaos.

NERVOUS NANCY IS ALL BUT DONE.

But, don’t worry, President Trump was on to all of this from the beginning. Remember on June 4, 2020 this got 1.3 million views in one hour.  It was reported by fact checkers as “rumors” and censored.
Then came the day, they had to just stop the truth all together, or were they just building up their fake narrative?
TWITTER PERMANENTLY CENSORES PRESIDENT TRUMP

So, Trump committed a violation under  Twitter’s  “Glorification of Violence policy” for telling people he will not be attending the Biden inauguration because his supporters believe this is confirming the election was not legitimate? And now the Twitter psychic’s believe this means no orderly transition? And he somehow is Jedi channeling the minds of supporters that violent acts can be committed because without his presence it is a “safe” target zone?

Is that Nancy? My, my….and her counter partner in crime(s) Harris? The two who van der Veen wanted to call as witnesses in the witch trial?
Yet, these people and all of Anitifa posts do not violate their Glorification of Violence policy? These people are evil and now we know why Pelosi was so rattled over the censoring not enough – we must impeach. Because she discovered that the more they try to silence the truth the louder it becomes. New platforms, new methods of delivery and new revelations. These people are all but finished. For their playbook has been opened, analyzed and they have been found wanting. They repeat themselves like a broken record and aren’t that smart. They only appeared smart because most people were sleeping and living their lives. No one was snooping behind their curtain.

Remember signs like these were all over D.C. on buildings, the 12 foot fence, and poles. And of course all over Twitter. These were acceptable? To who and for what purpose where they allowed?
Isn’t it time to turn the tables and demand a real investigation while all of this is front page news?
Dianne Marshall

OUT OF MIND » THE INSANITY OF REALITY » GOVERNMENT & THE NEW WORLD ORDER » CALL THEM OUT – DEMAND AN INVESTIGATION – PANDORA’S BOX IS NOW OPENED!