OUT OF MIND » BREAKING NEWS & HOT TOPICS » THE GREAT DIE OFF » CDC Now Reports FEWER Total Deaths Following COVID Injections than Last Week – Can We Trust ANY of Their Data?

CDC Now Reports FEWER Total Deaths Following COVID Injections than Last Week – Can We Trust ANY of Their Data?

CDC Now Reports FEWER Total Deaths Following COVID Injections than Last Week – Can We Trust ANY of Their Data? Thu Feb 18, 2021 9:35 am

CDC Now Reports FEWER Total Deaths Following COVID Injections than Last Week – Can We Trust ANY of Their Data?

by Brian Shilhavy
Editor, Health Impact News
The page on the CDC website that we reported about last week, Selected Adverse Events Reported after COVID-19 Vaccination, which is found here, has now been updated as of yesterday, February 16, 2021.
We preserved a copy of the page published last week, February 11, 2021, which you can find here as a .pdf file.
Comparing the page published on 2/11/21 with the one published yesterday, 2/16/21, you will be able to see that they revised their numbers for total number of COVID-19 vaccines administered as an increase, while revising the total number of deaths reported to VAERS following the vaccines as a decrease.
Can the CDC raise people from the dead?
From the 2/11/21 report:

A search of the VAERS database, which has data through 2/4/2021, lists only 653 reported deaths.
So how many reports of death following the COVID injections are actually being reported to the CDC?
We simply do not know, because the CDC controls the data.
But there is one thing that remains consistently the same in the CDC reports about the experimental, non-FDA approved mRNA COVID “vaccines”:

A review of available clinical information including death certificates, autopsy, and medical records findings revealed no link with vaccination.

Because the CDC does NOT have a category of “death by vaccine” to report on death certificates, and because medical professionals are pressured to enter death by “natural causes” on death certificates (see: Death Certificate Clerk Reveals How Cause of Death Reporting is Subjective and CDC Statistics are Not Reliable When Making Public Health Decisions), very few medical professionals are likely to report a death related to vaccines to VAERS.
However, non-medical professionals can file their own report. So if you or someone you know was injured by a vaccine, or if you had a loved one die soon after vaccination, you can file your own report to VAERS.
We have previously reported the case of Shawn Skelton, a nurse who has suffered from uncontrollable seizures since receiving the Moderna experimental mRNA COVID shot. See:

We have published two other videos of others who have suffered the same things, and Shawn continues to get many people contacting her on Facebook stating that they saw the same thing happen to a loved one who received one of the experimental mRNA COVID shots.
But she also gets hurtful, negative comments, claiming that she is making it all up. One of the criticisms she received was that she did not report this condition to VAERS, and that there are no reports in VAERS regarding her seizures.
But Shawn replied that they reported her injury to Moderna and to VAERS 3 times. 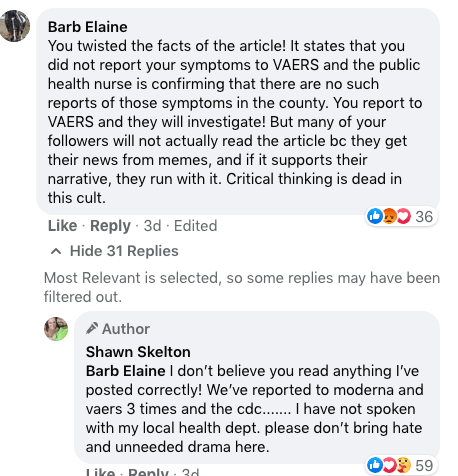 Is Shawn alone in her experience of reporting an injury to VAERS where the CDC has not released the report into the database?
As we have reported numerous times, the CDC is a corrupt organization that cannot be trusted. They are the largest purchaser and distributor of vaccines in the world, allocating over $5 BILLION in their budget (supplied by American taxpayers) each year to purchase and distribute vaccines from Big Pharma. See:


Should the CDC Oversee Vaccine Safety When They Purchase Over $5 Billion of Vaccines from Big Pharma?

The CDC also owns over 56 patents on vaccines, and many of their scientists earn royalties from the sale of vaccines. (Source.)
The CDC has a long history of corruption, and over the years many of their own scientists have tried to blow the whistle on this corruption only to be silenced. See some of our previous coverage on CDC corruption:


Can We Trust the CDC? British Medical Journal Reveals CDC Lies About Ties to Big Pharma

The CDC’s History of Research Fraud Regarding Vaccines and Autism

In addition, many of the directors running the CDC go on to work for Big Pharma developing vaccines after they complete their term at the CDC. See:

So when we mock the CDC and state that they are NOT concerned with public health, but that they are concerned with protecting sales for Big Pharma, we are not exaggerating just to make a point.
The evidence we have uncovered and reported over the past 10 years backs up our statement that the CDC is a corrupt organization working with criminal pharmaceutical companies.
But even though we have been reporting this for over a decade now, few in the public know it, but continue to go on blindly trusting in them.
Here is a video of the CEO of Pfizer, which has the notorious distinction of having the largest settlement for FRAUD with the DOJ, explaining in a recent interview with the corporate media why he has NOT received the experimental mRNA COVID injection himself.

OUT OF MIND » BREAKING NEWS & HOT TOPICS » THE GREAT DIE OFF » CDC Now Reports FEWER Total Deaths Following COVID Injections than Last Week – Can We Trust ANY of Their Data?