Southwestern Illinois, January 5, 2000, about 4:00 a.m.
Anyone who has been in Illinois in January knows that when the sun goes down, it gets cold... real cold. The night of January 5, 2000, was no exception. Everyone who could was staying warm inside, but all did not have this luxury.
Melvin Knoll's livelihood was his miniature golf course, and worried that something may have frozen there, he braved the cold night to make sure everything was OK.
When he arrived at his business, he noticed what he thought was a very bright star on the northeastern horizon.
He thought nothing of it at the time, and finished checking out the golf course. After satisfying himself that all was well, he jumped back into his warm truck to head home. As he did, he could not help but notice that the light was still there, and even more visible than before.
He watched it for a moment, and it suddenly seemed to be coming straight toward him! As it came nearer, he could see red lights shining toward the ground.
As it came even closer, the object appeared to be as tall as a two-story building, and as long as a football field. He could now clearly see windows, and a brightly lit inside.
He could not hear a sound from the unknown object as it continued to slowly make its way through the chilly night in a southwesterly direction.
Fearing that he would be laughed at if he could not provide corroboration, he quickly made his way to the local police in Highland. He related his story to the dispatcher, and she agreed to pass the information to the next town in the object's path, which was Central Communications in St. Clair County.
They in turn relayed the report to the Lebanon police department. At approximately 4:10 AM, a Lebanon police officer, hearing the radio report, spotted a bright object, which seemed to be suspended in the sky.
He could clearly make out two lights, very close to one another.
The policeman, with lights flashing, raced to the southeast, hoping for a better vantage point to view the strange sight. He watched the unknown object as he drove, and after a few moments, noticed that the two lights had merged into one.
The object seemed to be changing course, and moving directly toward him.
At this point, he stopped his patrol car, and rolled his window down. To his amazement, he could very clearly see a triangular-shaped UFO pass over him, at an altitude of 1,000 to 1,500 feet.
Then, the UFO quickly changed its course, moving in a westerly direction.
This sighting was corroborated by a policeman from Shiloh, who described the object as being shaped like a black arrowhead. 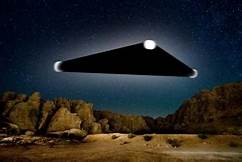 (Illustration courtesy of Darryl Barker Productions, Copyright 2001, Darryl Barker Productions)
As the giant triangular UFO moved from his view, the Lebanon policeman radioed St. Clair County Emergency Dispatch with his report, advised them of the object's direction, and requested that law enforcement officers be notified in Millstadt, and Dupo. Officer Craig A. Stevens would be the next person to see the UFO in Millstadt. His report is as follows:
On January 5, 2000 at approximately 4:28 AM 1, Officer Craig A. Stevens was on Patrol in the Village of Millstadt. I was monitoring radio traffic when I heard a report via CENCOM, that the Highland Police Department had a report of a large object flying in the air. CENCOM dispatched Lebanon P.D. to respond. I heard Lebanon state, is the guy 10-55.
Later I heard Lebanon state that he observed the object, and that it headed in the direction of Shiloh, and to have Shiloh P.D. be on the look out for it. I then heard that Shiloh had spotted the object.
I drove to the east end of town to see if I could observe the object. Then I drove to the north end of town, in the Liederkranz Park parking lot. While I was sitting there, I observed a very large flying object coming from a southward direction. The object was flying very low from 500 to 1000 ft., and was flying very slowly.
The object was making no noise. I could only hear a very low decibel buzzing sound. Then the object began banking to the north east direction, and continued to cruise away from me toward the area of Dupo.
I contacted dispatch, and advised them that I had spotted the object. I exited the patrol car, and took the Polaroid camera from the trunk, and attempted to take a picture. The camera was very cold.
The temperature was only approximately 18 to 20 degrees outside, and the picture did not seem to exit the camera properly.
I heard Dupo P.D. advise CENCOM that they quite possibly observed the object, but it was at a very high altitude.
I returned to the station, and drew a rough sketch of the object, and typed a report of my observations. (Illustration courtesy of Darryl Barker Productions, Copyright 2001, Darryl Barker Productions)
Note: This sighting was the subject of a television program by the Discovery Channel. A large part of this program was a reconstruction video of the events by the National Institute of Discovery Science (NISD). This program was shown twice on Discovery, 11/30/00 and 12/2/00. The reconstruction was based on the following criteria.
1) A survey crew was hired to take physical measurements of all locations from the different eyewitnesses. In this way an exact series of measurements regarding the location, direction, and distance of the flying object from the observers was possible.
2) A professional interviewer was hired who conducted face-to-face interviews with each witness at all locations. Photographs were taken of each location.
3) A 40 watt Argon laser with steering optics was used at each location with the help of each eyewitness to take the exact flight path of the object as determined from the perspective of each eyewitness. The eyewitnesses each determined the specific placement of the laser beams.
4) The reconstructed testimony was used to construct a series of 3D aerial grids for each location. Then a 3D CAD package was used to create a rough model of the object as seen by the different eyewitnesses. A second animation modeling software package was used to fine-tune the details.
Each eyewitness was consulted on a regular basis to verify the accuracy of the computer modeling process. With multiple iterations, the modeling tools fine-tuned the recreation into a final animation.
The computer-generated models were then merged with live footage so that the exact scale, size, and flight path of the object was precisely reconstructed to the satisfaction of each eyewitness.