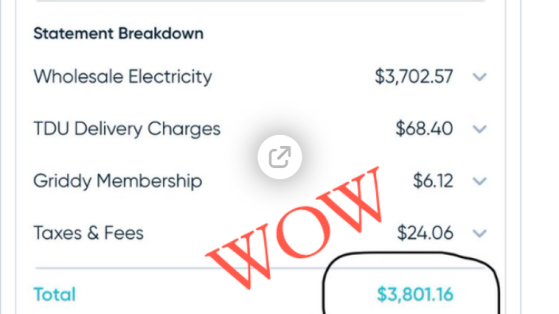 Source: Tyler Durden
The rolling blackouts that plunged up to 15 million Texans into darkness amid a historic cold snap are diminishing by the end of the week. About 188k customers were without power in the state on Friday morning. Days after power prices jumped from $50 per Megawatt to more than $9,000, the horror stories pour in for those who had power this week during grid chaos as they are mind-boggled how their energy bills skyrocketed.
None of these horrifying power bill stories below should be a shock as we described to readers in the piece titled “Power Bills To The Moon: Chaos, Shock As Electricity Prices Across US Explode,” that this would happen.
Texans who were on a variable or indexed plans with power companies are only now reporting their bills have jumped hundreds of dollars, if not thousands of dollars for the month.
Royce Pierce told Newsweek he owes electric company, Griddy, $8,162.73 for his electricity usage this month. He said that’s a massive increase from his usual $387 bill.

“It’s mind-blowing. I honestly didn’t believe the price at first,” Pierce said.
“It’s not a great feeling knowing that there is a looming bill that we just can’t afford.”

Pierce was one of the lucky ones who maintained power through the entire grid crisis, but it came at a steep cost.

“There is nothing we can do now. This is already an insane thing and I don’t care about the money when it comes to people’s health,” Pierce said, adding that if the virus pandemic hadn’t affected his work, “we could have taken care of this.”

Other horror stories of soaring power bills flood local television stations across the Lone Star State. When food and housing insecurities are incredibly high due to pandemic job loss, many folks in Texas who were on variable power plans could be financially devastated.
WFAA Dallas spoke with one person who said:

“When your electric company tells you to switch but there has been a hold on switching for over a week now. Using as little as possible 1300 sq ft house and this is my bill. . How is this fair. I only paid $1200 for the whole 2020 year. “

A tweet was accompanied by a screenshot of their bill that now stands at $3,800 for the month.

Ty Williams told WFAA that his average electric bill is around $660 per month. He said it now stands at $17,000.
Williams wondered: “How in the world can anyone pay that? I mean you go from a couple of hundred dollars a month… there’s absolutely no way…it makes no sense.”
… and in case you were wondering, OilPrice.com ran the numbers of how much it would cost to charge a Tesla in Texas earlier this week. While a regular charge costs around $18 using a Level 1 or Level 2 charger at home, estimates showed that the surge in power prices would have cost $900.
So the Texas power outage has morphed into outrage for customers who had variable power rates. We don’t want to speculate, but if small and medium-sized enterprises were on these plans (unhedged) – their bills could be absolutely devastating. Hopefully, larger companies hedged against the spike in power rates; if not, their energy for this month could be astronomical.