OUT OF MIND » THE INSANITY OF REALITY » GOVERNMENTS & THE NEW WORLD ORDER » Oh FFS!!! Now They Want to Cancel Kermit! Poor Kermie :( 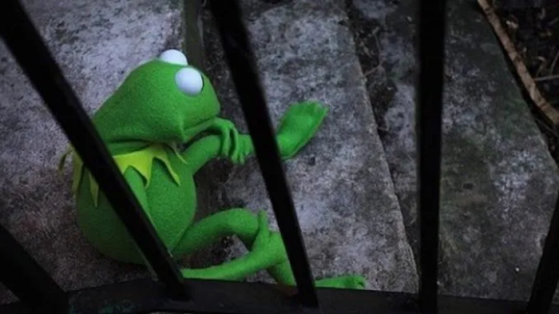 Source: Niamh Harris
According to the ‘woke’ leftists at Disney, Kermit the Frog and others from “The Muppet Show” are now “harmful and offensive” and should not be viewed by children.
In an astonishing move, Disney forced viewers to agree to a legal disclaimer before allowing them to watch any episode of the iconic show. When viewers tuned in as of last Friday, they were greeted with the following warning:
“This program includes negative depictions and/or mistreatment of people or cultures. These stereotypes were wrong then and are wrong now.”
“Rather than remove this content, we want to acknowledge its harmful impact, learn from it and spark conversation to create a more inclusive future together. Disney is committed to creating stories with inspirational and aspirational themes that reflect the rich diversity of the human experience around the globe,” the warning continues.
According to the Daily Mail, the warning is believed to refer to Muppet characters designed as stereotypes of Native Americans, Arabs and East Asians.
Dailywire.com reports: Twitter users blasted the move. “Nothing screams offensive like fury puppets. When I think of a cultural danger to society, it’s obviously Jim Henson’s Muppets,” wrote one.

Another Twitterer warned the cancel culture will soon target another famous muppet.
“I’m surprised the internet hasn’t tried Cancelling the Muppets’ Swedish Chef yet, since every and any thing is offensive now,” wrote the user.
In January, Disney blocked children younger than 7 from watching some classic animated movies including “Peter Pan,” “Dumbo” and “The Aristocats.” The move was made because of concerns that the films show racist stereotypes.
On Dumbo, Disney said: “The crows and musical number pay homage to racist minstrel shows, where white performers with blackened faces and tattered clothing imitated and ridiculed enslaved Africans on Southern plantations. The leader of the group in Dumbo is Jim Crow, which shares the name of laws that enforced racial segregation in the Southern United States. In ‘The Song of the Roustabouts,’ faceless Black workers toil away to offensive lyrics like ‘When we get our pay, we throw our money all away.’”
Disney also declared that “Peter Pan,” released in 1953, portrays offensive stereotypes that were inappropriate to those under seven.
In October, the company mulled the move to limit young viewers access to the children’s classic. “The film portrays Native people in a stereotypical manner that reflects neither the diversity of Native peoples nor their authentic cultural traditions,” the company said.
Disney added disclaimers to classic films on its streaming service to warn viewers that some scenes contain “negative depictions” and “mistreatment of people or cultures.” “These stereotypes were wrong then and are wrong now. Rather than remove this content, we want to acknowledge its harmful impact, learn from it and spark conversation to create a more inclusive future together,” says the 12-second disclaimer, which cannot be skipped.
“As part of our ongoing commitment to diversity and inclusion, we are in the process of reviewing our library and adding advisories to content that includes negative depictions or mistreatment of people or cultures,” the site says. “We can’t change the past, but we can acknowledge it, learn from it and move forward together to create a tomorrow that today can only dream of.”

OUT OF MIND » THE INSANITY OF REALITY » GOVERNMENTS & THE NEW WORLD ORDER » Oh FFS!!! Now They Want to Cancel Kermit! Poor Kermie :(

» Judge Anna ~ Answer to Ralph Kermit Winterrowd and Anyone Else Who THINKS I Am Not a Judge:
» Why We Are Poor
» Cindy Kay Currier Deletes Herself? WHERE IS CINDY KAY CURRIER???
» Poor Australia!
» OMG!!! WE MUST HELP THESE POOR SOULS!!!