Mars Is a Hellhole

Colonizing the red planet is a ridiculous way to help humanity.
9:57 AM ETShannon StironeWriter and journalist
https://www.theatlantic.com/ideas/archive/2021/02/mars-is-no-earth/618133/?fbclid=IwAR18qy-LRu0Dd2g-oIzMp1xWoWieBzLu9j0k68yDZumRQkyR_pA6VEI40a8 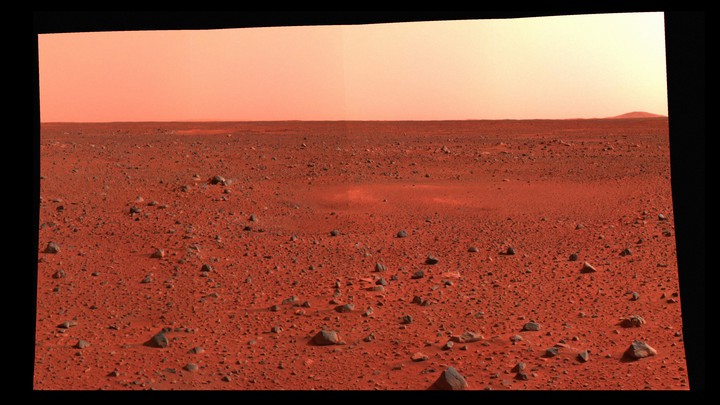 JPL / CORNELL / NASA
There’s no place like home—unless you’re Elon Musk. A prototype of SpaceX’s Starship, which may someday send humans to Mars, is, according to Musk, likely to launch soon, possibly within the coming days. But what motivates Musk? Why bother with Mars? A video clip from an interview Musk gave in 2019 seems to sum up Musk’s vision—and everything that’s wrong with it.
Your guide to life on a warming planet
Discover Atlantic Planet, a new section devoted to climate change and the ways it will reshape our worldExplore
In the video, Musk is seen reading a passage from Carl Sagan’s book Pale Blue Dot. The book, published in 1994, was Sagan’s response to the famous image of Earth as a tiny speck of light floating in a sunbeam—a shot he’d begged NASA to have the Voyager 1 spacecraft take in 1990 as it sailed into space, 3.7 billion miles from Earth. Sagan believed that if we had a photo of ourselves from this distance, it would forever alter our perspective of our place in the cosmos.
The Pale Blue Dot photograph that inspired Carl Sagan’s book of the same name. (JPL-Caltech / NASA)
Musk reads from Sagan’s book: “Our planet is a lonely speck in the great enveloping cosmic dark. In our obscurity, in all this vastness, there is no hint that help will come from elsewhere to save us from ourselves. The Earth is the only world known so far to harbor life. There is nowhere else, at least in the near future, to which our species could migrate.”https://8d566d959acc9a6fb67e31045d65b633.safeframe.googlesyndication.com/safeframe/1-0-37/html/container.html


But there Musk cuts himself off and begins to laugh. He says with incredulity, “This is not true. This is false––Mars.”
He couldn’t be more wrong. Mars? Mars is a hellhole. The central thing about Mars is that it is not Earth, not even close. In fact, the only things our planet and Mars really have in common is that both are rocky planets with some water ice and both have robots (and Mars doesn’t even have that many).
Mars has a very thin atmosphere; it has no magnetic field to help protect its surface from radiation from the sun or galactic cosmic rays; it has no breathable air and the average surface temperature is a deadly 80 degrees below zero. Musk thinks that Mars is like Earth? For humans to live there in any capacity they would need to build tunnels and live underground, and what is not enticing about living in a tunnel lined with SAD lamps and trying to grow lettuce with UV lights? So long to deep breaths outside and walks without the security of a bulky spacesuit, knowing that if you’re out on an extravehicular activity and something happens, you’ve got an excruciatingly painful 60-second death waiting for you. Granted, walking around on Mars would be a life-changing, amazing, profound experience. But visiting as a proof of technology or to expand the frontier of human possibility is very different from living there. It is not in the realm of hospitable to humans. Mars will kill you.
Musk is not from Mars, but he and Sagan do seem to come from different worlds. Like Sagan, Musk exhibits a religious-like devotion to space, a fervent desire to go there, but their purposes are entirely divergent. Sagan inspired generations of writers, scientists, and engineers who felt compelled to chase the awe that he dug up from the depths of their heart. Everyone who references Sagan as a reason they are in their field connects to the wonder of being human, and marvels at the luck of having grown up and evolved on such a beautiful, rare planet.
The influence Musk is having on a generation of people could not be more different. Musk has used the medium of dreaming and exploration to wrap up a package of entitlement, greed, and ego. He has no longing for scientific discovery, no desire to understand what makes Earth so different from Mars, how we all fit together and relate. Musk is no explorer; he is a flag planter. He seems to have missed one of the other lines from Pale Blue Dot: “There is perhaps no better demonstration of the folly of human conceits than this distant image of our tiny world.”
Sagan did believe in sending humans to Mars to first explore and eventually live there, to ensure humanity’s very long-term survival, but he also said this: “What shall we do with Mars? There are so many examples of human misuse of the Earth that even phrasing the question chills me. If there is life on Mars, I believe we should do nothing with Mars. Mars then belongs to the Martians, even if [they] are only microbes.”https://8d566d959acc9a6fb67e31045d65b633.safeframe.googlesyndication.com/safeframe/1-0-37/html/container.htmlhttps://8d566d959acc9a6fb67e31045d65b633.safeframe.googlesyndication.com/safeframe/1-0-37/html/container.html
Musk, by contrast, is encouraging a feeling of entitlement to the cosmos—that we can and must colonize space, regardless of who or what might be there, all for a long-shot chance at security.
Legitimate reasons exist to feel concerned for long-term human survival, and, yes, having the ability to travel more efficiently throughout the solar system would be good. But I question anyone among the richest people in the world who sells a story of caring so much for human survival that he must send rockets into space. Someone in his position could do so many things on our little blue dot itself to help those in need.
To laugh at Sagan’s words is to miss the point entirely: There really is only one true home for us—and we’re already here.SHANNON STIRONE is a freelance science writer based in the Bay Area.