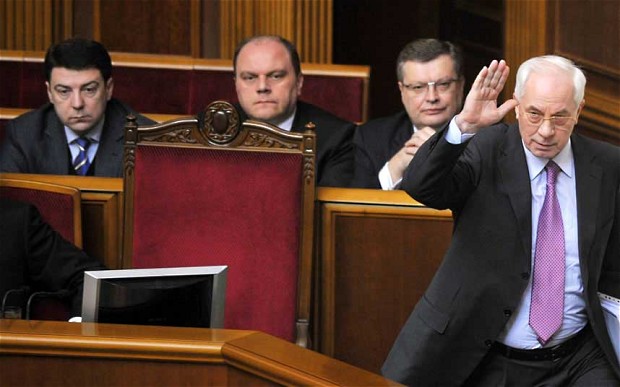 Ukrainian Prime Minister Mykola Azarov and the entire
government resigned today in a surprise move after controversial
elections as the economy teeters on the brink of recession.

The presidency said President Viktor Yanukovych had accepted Mr
Azarov’s request to give up his post and become an MP, a move expected
to be repeated by several cabinet ministers.

It remained unclear who would fill the powerful post of premier,
with some analysts speculating it could go to a member of the elite
close to Mr Yanukovych known as the “Family”.

“President Viktor Yanukovych accepted the resignation of Prime
Minister Mykola Azarov, satisfying the demand of the latter,” the
statement added.

The move cames as a new parliament prepares to meet after October
28 legislative elections which raised new concerns about democratic
standards under Mr Yanukovych.

The ruling Regions Party appears to have retained control of the
Verkhovna Rada with the help of independents despite a strong challenge
from the opposition parties of boxer Vitali Klitschko and imprisoned
ex-premier Yulia Tymoshenko.

OSCE observers slammed the polls as a setback for Ukraine, marred
by the absence of Ms Tymoshenko who is serving a seven-year sentence on
abuse of power charges she says were trumped up by Mr Yanukovych.

But economists also fear the country is entering troubled times and
could be on the brink of a new recession that would see it seek billions
of dollars in disbursements from an IMF standby package.

Ukraine’s economy contracted by 1.2 percent in the third quarter of
this year, and several banks fear the country is heading for zero
growth in 2012, not to mention a sharp devaluation of the local
currency.

“This (the resignation) is linked to a number of economic
challenges which Ukraine has fallen into thanks to this president and
this government,” said opposition leader Arseniy Yatsenyuk.

A Russian-speaking bureaucrat mocked by many in Ukraine for his dry
and humourless image, Mr Azarov took office in 2010 shortly after Mr
Yanukovych defeated Ms Tymoshenko in a fiercely-contested presidential
election.

Mr Azarov has always been seen as a close ally of Mr Yanukovych,
but some analysts believe his power base has been undermined by the
recent rise of a “Family” of close acquaintances of the president into
top positions.

mr Arbuzov, 36, is seen as a key member of the “Family” of Yanukovych allies.

His meteoric rise to one of the most important economic jobs in the
country has raised eyebrows in Ukraine. He is a confidant of Mr
Yanukovych’s increasingly powerful son Olexander, who is regarded as the
Family kingpin.

“It is possible that this radical resignation makes sense; it is
better to dissolve the government and appoint another one,” said
Kostyantyn Bondarenko, head of the Ukrainian Politics Institute.

He said that resignation made sense for Mr Azarov, who was
approaching the pension age of 65 and would have had to work on
replacing a string of ministers had he stayed in power.

Mr Yanukovych has been criticised for concentrating ever more power
around himself and allies since defeating the leaders of the
pro-Western Orange Revolution in the 2010 polls.

Other candidates for prime minister could include national security
chief Andriy Kluyev and deputy presidential chief of staff Iryna
Akimova.

Ukrainian parliament speaker Volodymyr Lytvyn said that a decision
on the composition of the new government could be taken on December 13
or 14 after the new parliament convenes. The ministers will remain in
their posts until a new government is formed, the presidency said.

It also noted that under Ukrainian law, whenever the prime minister resigns the entire government must do so.

The presidency explained the mass resignation by saying that Mr
Azarov had decided to take up a parliamentary seat rather than staying
on as prime minister.

Under Ukrainian law, deputies have to cease their former work in order to take up their seats in parliament.

Along with Mr Azarov, a number of other ministers were elected to
parliament including Deputy Prime Minister Sergiy Tigipko and Economy
Minister Petro Poroshenko.