OUT OF MIND » BREAKING NEWS & HOT TOPICS » THE GREAT DIE OFF » Number of Injuries Reported to CDC After COVID Vaccines Climbs by Nearly 4,000 in One Week

Number of Injuries Reported to CDC After COVID Vaccines Climbs by Nearly 4,000 in One Week 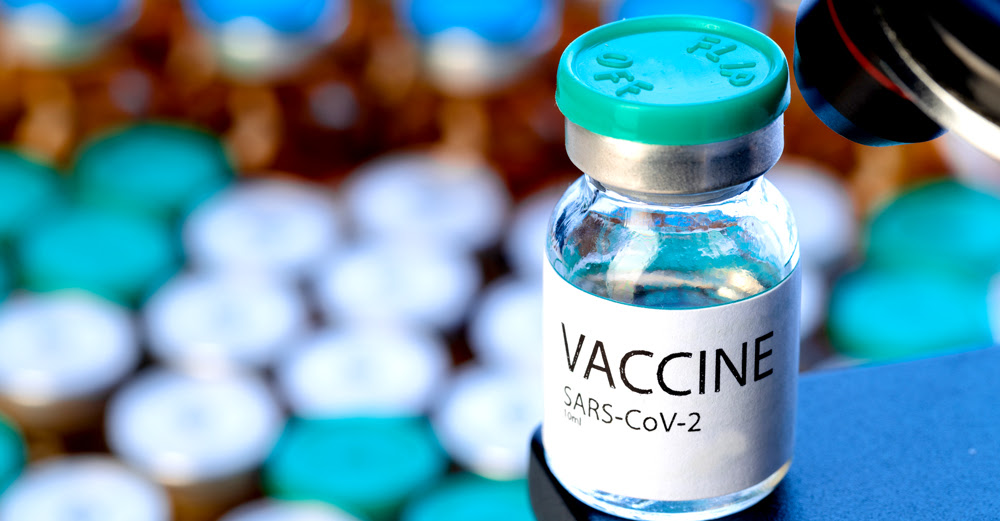 Number of Injuries Reported to CDC After COVID Vaccines Climbs by Nearly 4,000 in One Week

The latest data made public by the Centers for Disease Control and Prevention’s (CDC) Vaccine Adverse Event Reporting System (VAERS) on deaths and injuries reported after COVID vaccines are in line with trends that have been emerging since the first data were released in December.
Between Dec. 14, 2020 and Feb. 18, 2021, 19,907 reports of adverse events have been reported to VAERS, including 1,095 deaths and 3,767 serious injuries.
About a third of the deaths reported occurred within 48 hours of vaccination, and =0&NUMDAYS[]=1&NUMDAYS[]=2]48% of the people who died became ill within 48 hours of being vaccinated. 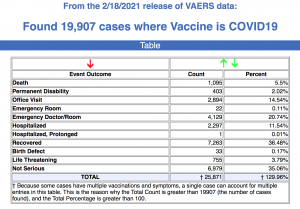 About 21% of the deaths were cardiac-related. As The Defender reported last month,  Dr. J. Patrick Whelan, a pediatric rheumatologist, warned the U.S. Food and Drug Administration in December that mRNA vaccines like those developed by Pfizer and Moderna could cause inflammation of the brain and heart, and other injuries in ways not assessed in safety trials.
Of the reported deaths, 966 were reported in the U.S. and 129 outside the U.S. The average age of the deceased was 77.8, the youngest was 23. Of those who died, 53% were male, 46% female and 1% of the reports did not include gender. Of those who died, 56% received the Pfizer vaccine, and 43% got the Moderna vaccine.
The number of serious adverse events reports increased by 641 this week, to a total of 3,767 between Dec. 14, 2020, and Feb. 18. Adverse reaction reports from the latest CDC data include:

By comparison, during the same time period — Dec. 14, 2020 – Feb. 18, 2021 —  VAERS received reports of =FLU(H1N1)&VAX[]=FLU3&VAX[]=FLU4&VAX[]=FLUA3&VAX[]=FLUA4&VAX[]=FLUC3&VAX[]=FLUC4&VAX[]=FLUN(H1N1)&VAX[]=FLUN3&VAX[]=FLUN4&VAX[]=FLUR3&VAX[]=FLUR4&VAX[]=FLUX&VAX[]=FLUX(H1N1)&VAX[]=H5N1&DIED=Yes&REPORT_YEAR_LOW=2020&REPORT_MONTH_LOW=09&REPORT_YEAR_HIGH=2021&REPORT_MONTH_HIGH=02]83 deaths following flu vaccines.
According to the VAERS website, “it is important to note that for any reported event, no cause-and-effect relationship has been established … VAERS collects data on any adverse event following vaccination, be it coincidental or truly caused by a vaccine. The report of an adverse event to VAERS is not documentation that a vaccine caused the event.”
VAERS is the primary mechanism in the U.S. for reporting adverse vaccine reactions. Reports submitted to VAERS require further investigation before a determination can be made as to whether the reported adverse event was directly or indirectly caused by the vaccine.
As of Feb. 18, 57.74 million COVID vaccines had been administered in the U.S.
On Feb. 27, the U.S. Food and Drug Administration granted Emergency Use Authorization to a third COVID vaccine — the Johnson & Johnson single-shot vaccine. Doses are expected to roll out as early as this week. Children’s Health Defense asks anyone who has experienced an adverse reaction, to any vaccine, to file a report following these three steps.

OUT OF MIND » BREAKING NEWS & HOT TOPICS » THE GREAT DIE OFF » Number of Injuries Reported to CDC After COVID Vaccines Climbs by Nearly 4,000 in One Week