OUT OF MIND » THE INSANITY OF REALITY » GOVERNMENTS & THE NEW WORLD ORDER » If You Want to Understand Why 5000 National Guardsmen Are Still in DC, Read the Indictment of Oath Keepers Involved in the Capitol Riot

If You Want to Understand Why 5000 National Guardsmen Are Still in DC, Read the Indictment of Oath Keepers Involved in the Capitol Riot

If You Want to Understand Why 5000 National Guardsmen Are Still in DC, Read the Indictment of Oath Keepers Involved in the Capitol Riot Sat Mar 06, 2021 5:20 pm

Admin
Posts : 106772
Join date : 2012-01-04
Location : Woodstock Nation
If You Want to Understand Why 5000 National Guardsmen Are Still in DC, Read the Indictment of Oath Keepers Involved in the Capitol Riot 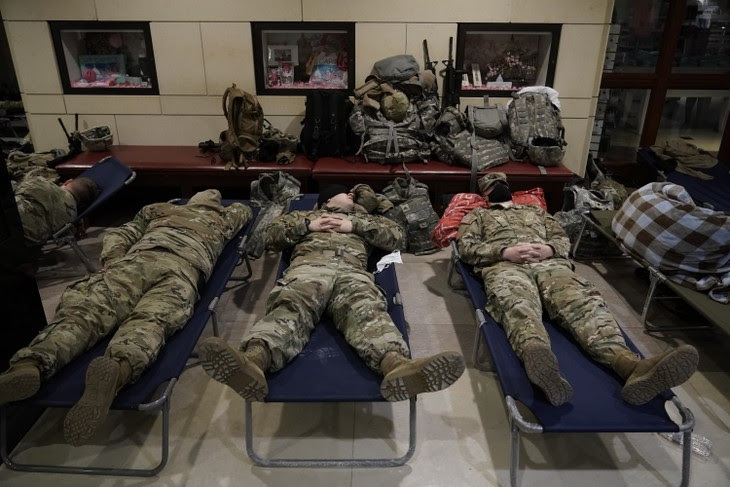 As best we know, some 310 persons have been charged with various crimes in conjunction with the riot in the US Capitol on January 6 (read Stop Calling It an ‘Insurrection’). Compared to BLM and Antifa (yes, I know, Antifa is just an idea, not an organization) protesters who caused billions of dollars of damage and economic loss over a period of months last summer, the disparate treatment is palpable. With the Democrat-supported rioters, charges are being dismissed in droves (see What’s Happened to Many of the Federal Cases Against Portland Rioters Should Infuriate You). In the Capitol rioters’ case, the full weight of the federal government is being used to prosecute people for types of crimes that did not rate notice by federal law enforcement when committed by politically favored rioters.

Now, some of these cases are getting visibility. Jacob Chansley, the so-called QAnon shaman, is going through what can only be described as a Maoist struggle session in the hope that he will be spared (for the record, I don’t care what happens to this clown, but the process here is obscene):
Dude, if you have the cojones to be THE most visible person in the Capitol riot, man up and take your licks, don’t cry like a little girl, and blame others.
As the cases move out of the bizarre and lie-filled media accounts (no “kill teams,” no zip ties, no beating a cop to death, no guns, no connection to Trump’s speech) and into the legal system, we see more and more of those accused of complicity in the Capitol riot are being released on their own recognizance pending trial. This is not how you treat dangerous villains who tried to hang Mike Pence and take over the US government. One of the high profile cases, in terms of the federal government trying to build a widespread conspiracy case, suffered a blow earlier this week when a federal judge ordered Proud Boys leader Ethan Nordean released from custody (read In Granting Bail DC Judge Questions Strength of Government’s “Riot” Evidence Against Proud Boys Leader Ethan Nordean).  It is kind of hard to claim that a particular organization was central to the Capitol riot when a federal magistrate and then a federal judge snicker at the evidence.

Last month, though, we got a look at one of the “conspiracy” indictments of members of the Oathkeepers. These are the people targeted.

The evidence against them basically makes LARPing a federal crime.

g. Traveling into Washington, D.C., on January 6, 2021, while wearing clothes with the Oath Keepers insignia; (note: you could actually buy this on Amazon)
h. Changing into paramilitary gear-including helmets-before participating in the January 6 operation;
i. Moving together in a military “stack” formation while utilizing hand signals to maintain communication and coordination while advancing toward the Capitol as part ofthe January 6 operation;

Most of the planning was done on Facebook, which calls to mind this famous scene from The Wire:

Among other very serious crimes they discuss is the importance of NOT being armed because they didn’t want to violate DC’s gun laws. Because the one thing that criminals don’t want to do is break the law.

On December 31 , 2020, 1KELLY MEGGS wrote a series of messages to another person on Facebook that said, “You guys Gonna carry?” and “Ok we aren’t either, we have a heavy QRF5 1O Min out though.”

This seems rather counterintuitive to be concerned about carrying firearms if you knew you were going to be trying to overthrow the government. But it is pretty obvious that a lot of folks had the same concern. To date, there have been no charges filed against anyone for DC or federal firearms violations related to the riot (see Ron Johnson Gets FBI to Admit That No Firearms Were Seized During the Capitol Riot).
But there is mention of a QRF, which is a Quick Reaction Force. This is a mobile force held in reserve that can deploy on short-notice to be used at the commander’s discretion in high-risk situations. What did this “heavy QRF” look like?

CALDWELL (about two hours later):
Talked to [PERSON THREE]. At least one full bus 40+ people coming from N.C. Another group (unclear ifMississippi guys) also a bus. Busses have their own lane on the 14th street bridge so they will be able to get in and out. [PERSON THREE] is driving plus I and arriving nite before. As we speak he is trying to book a room at Comfort Inn Ballston/Arlington because ofits close-in location and easy access to downtown because he feels 1) he’s too broken down to be on the ground all day and 2) he is committed to being the quick reaction force anfbringing the tools ifsomething goes to hell. That way the boys don’t have to try to schlep weps on the bus. He’ll bring them in his truck day before. Just got a text from him he WAS able to book a room in that hotel I recommended which is on Glebe Road in Arlington. However it goes it will be great to see you again! I sure hope your arm is getting better!

According to Byron York at the Washington Examiner:

OUT OF MIND » THE INSANITY OF REALITY » GOVERNMENTS & THE NEW WORLD ORDER » If You Want to Understand Why 5000 National Guardsmen Are Still in DC, Read the Indictment of Oath Keepers Involved in the Capitol Riot