Insatiable demand for cannabis has created a giant carbon footprint

Insatiable demand for cannabis has created a giant carbon footprint 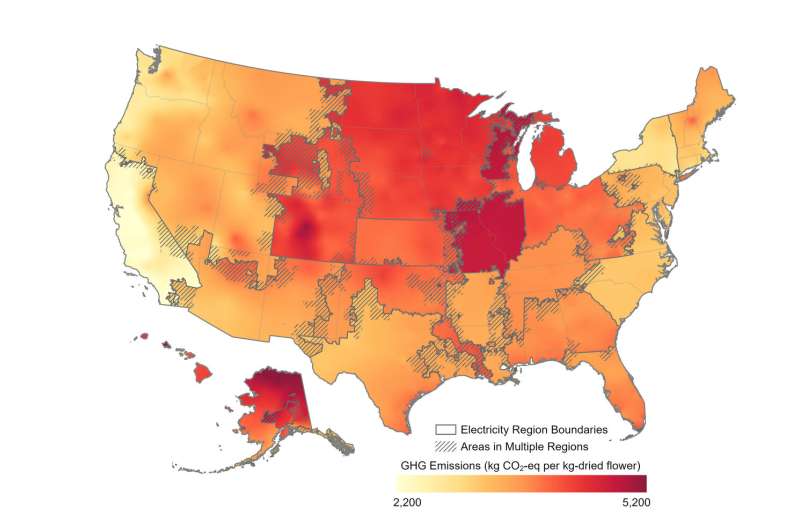 The life cycle greenhouse gas emissions from indoor cannabis cultivation modeled across the U.S. Credit: Hailey Summers/Colorado State University
It’s no secret that the United States’ $13 billion cannabis industry is big business. Less obvious to many is the environmental toll this booming business is taking, in the form of greenhouse gas emissions from commercial, mostly indoor production.https://36c7bdb571aa01a80f815b11f82ad0e1.safeframe.googlesyndication.com/safeframe/1-0-37/html/container.html
A new study by Colorado State University researchers provides the most detailed accounting to date of the industry’s carbon footprint, a sum around which there is only limited understanding. What is clear, though, is that consumer demand for cannabis is insatiable and shows no signs of stopping as more states sign on to legalization.
The study, published in Nature Sustainability, was led by graduate student Hailey Summers, whose advisor, Jason Quinn, is an associate professor in the Department of Mechanical Engineering. Summers, Quinn and Evan Sproul, a research scientist in mechanical engineering, performed a life-cycle assessment of indoor cannabis operations across the U.S., analyzing the energy and materials required to grow the product, and tallying corresponding greenhouse gas emissions.
They found that greenhouse gas emissions from cannabis production are largely attributed to electricity production and natural gas consumption from indoor environmental controls, high-intensity grow lights, and supplies of carbon dioxide for accelerated plant growth.
“We knew the emissions were going to be large, but because they hadn’t been fully quantified previously, we identified this as a big research opportunity space,” Summers said. “We just wanted to run with it.”
The CSU group’s efforts update previous work by Lawrence Berkeley National Laboratory researchers, which quantified small-scale grow operations in California and predated the cascade of state-by-state legalization since Colorado was first to legalize in 2012. To date, 36 states have legalized medical use of cannabis, and 15 have legalized recreational use.
Mapping variable emissions
The CSU team surmised there would be substantial variability in emissions depending on where the product was being grown, due to climate as well as electric grid emissions. Their recently published work captures the potential cross-country spread of large commercial warehouses for growing cannabis, and it models emissions for several high-growth locations around the country. Their results include a map that shows relative emissions anywhere in the U.S., as defined as emissions per kilogram of cannabis flower. They’ve also developed a GIS map that allows users to enter a county name and find local emissions estimates.https://googleads.g.doubleclick.net
Their research shows that U.S. indoor cannabis cultivation results in life-cycle greenhouse gas emissions of between 2,283 and 5,184 kilograms of carbon dioxide per kilogram of dried flower. Compare that to emissions from electricity use in outdoor and greenhouse cannabis growth, which is 22.7 and 326.6 kilograms of carbon dioxide, respectively, according to the New Frontier Data 2018 Cannabis Energy Report. Those outdoor and greenhouse numbers only consider electricity, while the CSU researchers’ estimate is more comprehensive, but the comparison still highlights the enormously larger footprint of indoor grow operations.
The researchers were surprised to find that heating, ventilation and air conditioning systems held the largest energy demand, with numbers fluctuating depending on the local climate—whether in Florida, which requires excessive dehumidifying, or Colorado, where heating is more important.
The high energy consumption of cannabis is due in part to how the product is regulated, Quinn said. In Colorado, many grow operations are required to be in close proximity to retail storefronts, and this has caused an explosion of energy-hungry indoor warehouses in urban areas like Denver. According to a report from the Denver Department of Public Health and Environment, electricity use from cannabis cultivation and other products grew from 1% to 4% of Denver’s total electricity consumption between 2013 and 2018.
The team is seeking more funding for continuing their modeling work, with hopes of extending it to a comparison between indoor and potential outdoor growth operations. Ultimately, they would like to help the industry tackle environmental concerns while legal cannabis is still relatively new in the U.S.
“We would like to try and improve environmental impacts before they have become built into the way of doing business,” Sproul said.

» 'Dark Data' Is Leaving a Huge Carbon Footprint, And We Have to Do Something About It
» Giant Footprint - South Africa - Michael Tellinger
» Heat Waves Artificially Created By Carbon Black Dust, Not CO2, & Documents Prove It
» Cannabis Saved Our Granddaughter’s Life, So We Donated $33.7 Million to Medical Cannabis Research
» Confession of a Doctor Who Drank Cannabis Oil: “I Had Cancer, Cannabis Oil Brought My Life Back”