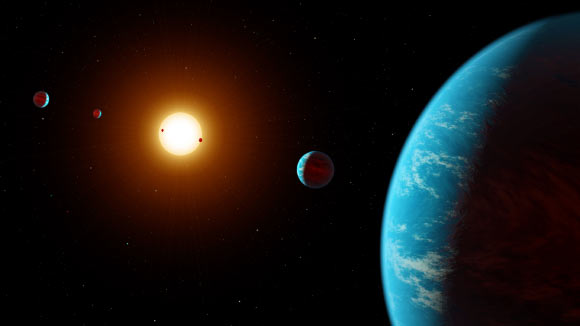 An artist’s impression of the six-planet system K2-138. Image credit: NASA / JPL-Caltech / R. Hurt, IPAC / Sci-News.com.
K2-138 is located approximately 792 light-years away in the constellation of Aquarius.
Also known as 2MASS J23154776-1050590 and EPIC 245950175, the star is slightly smaller and cooler than our Sun.
In 2018, a team of citizen scientists and professional astronomers using data from NASA’s Kepler/K2 mission discovered five massive planets — named K2-138b, c, d, e, and f — orbiting the star.
The planets are all between the size of Earth and Neptune. K2-138b may potentially be rocky, but K2-138c, d, e, and f likely contain large amounts of ice and gas.
They have orbital periods shorter than two weeks (2.35, 3.56, 5.40, 8.26, and 12.76 days) and are incredibly hot.
They orbit their star in concentric circles, forming a tightly packed planetary system, unlike our own elliptical, far-flung Solar System.
The team also identified two additional transits around 42 days apart, indicating a possible sixth planet in the system.
“K2-138 was the first K2 planet system discovered by citizen scientists through the Exoplanet Explorers program on the Zooniverse,” said Caltech astronomer Kevin Hardegree-Ullman and colleagues.
“The citizen scientists were able to identify four sub-Neptune sized planets by visual inspection of the light curve.”
“A closer inspection of the diagnostic plots from the TERRA algorithm elucidated a super-Earth interior to the orbits of the other four planets.”
“We observed K2-138 with the Infrared Array Camera on NASA’s Spitzer Space Telescope at the predicted transit time of the putative sixth planet,” they added.
Using Spitzer data, the astronomers validated the sixth planet’s orbital period of 41.966 days and measured a radius of 3.4 times that of Earth.
“This adds to the nine systems with six or more planets currently known, makes K2-138 the K2 discovered system with the most planets, and yields one of the longest period K2 planets,” they said.
“K2-138g breaks the continuous near 3:2 mean motion resonance of the inner five planets, but the sizeable gap between K2-138f and g hints at the possibility there could be additional non-transiting planets in this system.”
“With its five sub-Neptunes and one super-Earth, the K2-138 system provides a unique test bed for comparative atmospheric studies of warm to temperate planets of similar size, dynamical studies of near resonant planets, and models of planet formation and migration,” they concluded.
A paper on the discovery will be published in the Astronomical Journal.
_____
Kevin K. Hardegree-Ullman et al. 2021. K2-138g: Spitzer Spots a Sixth Planet for the Citizen Science System. AJ, in press; arXiv: 2102.08978

» Astronomers discover mysterious red planet that never existed?
» Nibiru Planet X: Foreign Planetary System Is Approaching Our Own Solar System
» Scientists Discover that Humans Have A 'Magnetic Sixth Sense' to Detect Something We Can't See
» Astronomers discover huge "metal structure" under the largest lunar crater
» NASA Lies,Red Planet(N I B I R U) in the Planetary system-NASA Code Gliese 229A-2011 SECCHI Footage