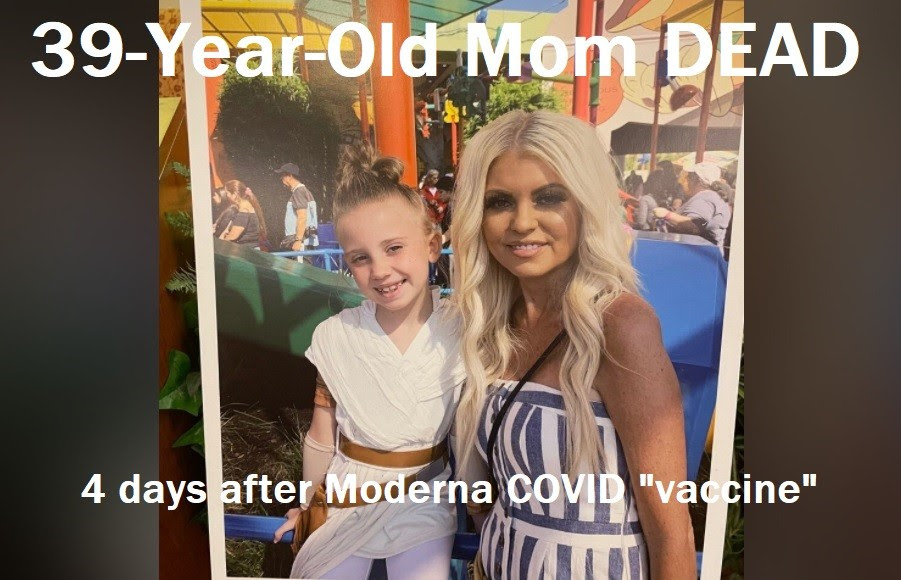 Kassidi Kurill by all accounts was healthy, happy and “had more energy” than just about anyone else around her. Her family told 2News she had no known health problems or pre-existing conditions.

Her death was so sudden, that most of her family did not even have a chance to say goodbye to her.

Four days after Kassidi’s second dose of the COVID-19 vaccine, she was gone. Dead before most of her family could say their goodbyes.
“She came in early and said her heart was racing and she felt like she need to get to the emergency room.” Alfred woke up that Thursday morning to his daughter asking for help.
Kassidi and her 9-year-old daughter Emilia lived with her parents. They’d been one family under the same roof since Emilia was born. Mom and Dad, grandma and grandpa always close by when they were needed.
Alfred, now retired, spent a lot of time with his girls. Kassidi, he says, “got sick right away, soreness at the shot location then started getting sick then started complaining that she was drinking lots of fluids but couldn’t pee and then felt a little better the next day.”
It was her second shot; the first came with a sore arm but no real side effects or issues. Kassidi was the first in the family to get the vaccine.
She was a surgical tech for several local plastic surgeons, and the vaccine was a part of the job. She stepped up to get the shot, her family says, without hesitation.
Kassidi got the second shot on Monday, Feb. 1. While she was in bed all day Tuesday and Wednesday, it wasn’t until Thursday morning she knew something was wrong.
She woke up early, got ready and asked her dad to driver her to the local ER, where they arrived by 7 a.m.
As soon as they walked in the door, Kassidi was throwing up. Minutes later, questions were raised about what was making her so sick.
Her dad recalls doctors asking question after question, “Is there any explanation?”
He answered saying, “She just had the shot, they did a blood test and immediately came back and said she was very-very sick, and her liver was not functioning.”
“It was a total shock and I was even afraid to tell my wife” he recalled. It was a call he did not want to make.
Kassidi was flown to Intermountain Medical Center in Murray, a trauma center where they had the ability to do transplants if needed. Her liver was failing and a transplant, doctors believed, was her best option at survival.
That’s when Kristin got the call her sister was being transferred. She jumped on the first flight to Utah, but when she landed, she was not allowed in the hospital because of COVID-19 protocols. She waited with Kassidi’s daughter Emilia, hoping for a miracle.
Both of Kassidi’s parents volunteered to donate a portion of their liver, they knew if they were not a match, they could be part of a trade where someone else who was a match could help their daughter.
They never got the chance to offer the lifesaving gift. Doctors at Intermountain were doing everything they could to get Kassidi stable, but nothing seemed to work. Alfred said his daughter’s liver, kidney and heart shut down.
Alfred, who was with his daughter when she passed, said it didn’t make any sense.
She was healthy – happy and active. The greatest mom you ever saw in your life and then she was so sick that in less than 12 hours intubated and on life support.
She passed, he said, 30 hours after they arrived in the emergency room.

KUTV interviewed Dr. Erik Christensen, Utah’s chief Medical Examiner, who confirmed what we have reported here at Health Impact News for years now, that death by vaccine is almost never recorded on a death certificate, and in fact, I am not even sure it ever has.
He stated that the only time where a death might be related to a vaccine is when there is an anaphylaxis reaction, but even then, anaphylaxis would probably be listed as the cause of death, with the vaccine being listed as the cause of the “allergic reaction.”

Dr. Erik Christensen, Utah’s chief Medical Examiner, said proving vaccine injury as a cause of death almost never happens.
“Did the vaccine cause this? I think that would be very hard to demonstrate in autopsy,” he said.
Erik can think of only one instance where you would see a vaccine as the cause of death on an official autopsy report and that would be in an immediate case of Anaphylaxis. One where a person received the vaccine and died almost instantaneously.
“Short of that” he said, “it would be difficult for us to definitively say this is the vaccine.”

The CDC updated their Selected Adverse Events Reported after COVID-19 Vaccination page yesterday, March 9, 2021, and they are now reporting 1,637 deaths following the experimental COVID injections reported to VAERS.
But their position on these deaths remains the same:

A review of available clinical information including death certificates, autopsy, and medical records revealed no evidence that vaccination contributed to patient deaths. (Emphasis theirs – source.)

Apparently the majority of the American public trusts the CDC and believes that all of these deaths following the COVID injections are just coincidental.
Even Kassidi’s father, who was interviewed for this story at KUTV, stated that he went ahead and got the second Moderna dose for the experimental mRNA COVID injection, in spite of the fact that he had just watched his daughter die shortly after getting it, and with his granddaughter now suffering without her mother begging him not to get the second dose.
Comment on this article at HealthImpactNews.com.