“An ark, just like Noah’s in the Bible, could store endangered species more cost-effectively than protecting them on earth or creating an artificial ecosystem.” 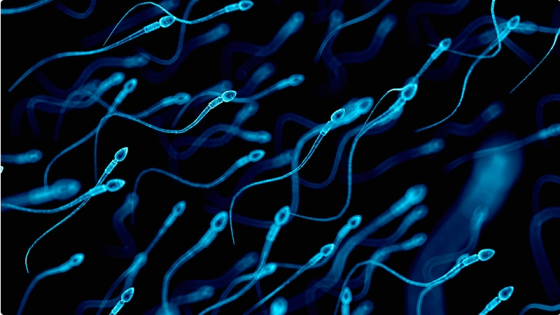 Source: Zero Hedge
The Svalbard Global Seed Vault on the Norwegian island of Spitsbergen in the remote Arctic Svalbard archipelago appears to be losing its appeal as scientists propose a “lunar ark” to house millions of species of seeds, sperm, eggs, and DNA.
A team of researchers from the University of Arizona, led by Jekan Thanga, proposed building a massive “ark” on the moon as a “modern global insurance policy” against natural disasters, socio-economic chaos, asteroids, and the threat of nuclear war. 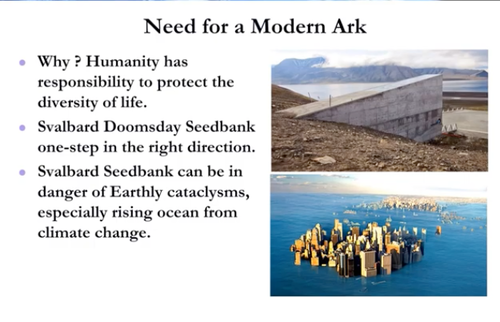 “Earth is naturally a volatile environment,” Thanga said in the study titled “Lunar Pits and Lava Tubes for a Modern Ark.” The team debuted the study at the Institute of Electrical and Electronics Engineers (IEEE) Aerospace Conference last Saturday.
“An ark, just like Noah’s in the Bible, could store endangered species more cost-effectively than protecting them on earth or creating an artificial ecosystem,” Thanga said.
The researcher proposed building the ark in a lunar pit and or lava tubes, holding upwards of 6.7 million species of seeds, sperm, eggs, and DNA.
Thanga said due to instability, Earth-based repositories, such as Svalbard, could leave specimens vulnerable. 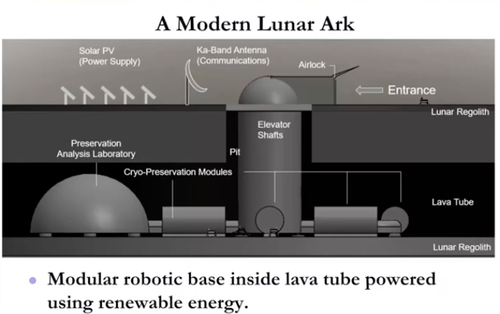 Thanga’s presentation explained that various species would be cryogenically preserved. “We can still save them until the tech advances to then reintroduce these species — in other words, save them for another day,” he added.
To transport upwards of 6.7 million samples, it would take 250 rocket launches. By comparison, the International Space Station took only 40 rocket launches to build.
The scientist suggested solar panels would power the facility. However, future moon bases will likely be powered with miniature nuclear reactors, as we’ve explained before.
Here’s the full presentation:
“We propose development of a modern day ark to be housed inside lunar lava tubes. The ark would house eggs, sperms, seeds and other DNA matter from all of the endangered species on Earth. It would serve as a global insurance policy. Earth faces probability of peril from various natural disasters and human threats such as global nuclear war that could wipe out a large number of species in a short time. Lunar lava tubes were discovered in 2013 and are likely to have remained pristine for 3-4 billion years. They are only 4-5 days from Earth. They are an excellent shelter against lunar surface temperature swings, cosmic radiation and micro-meteorites. The ark would house these endangered species in cryo-conditions of -180 C and colder. Our research shows that new technologies are need to make this initiative possible. It will require substantial investments and advances in robotics to operate under cryo-conditions,” he said. https://www.youtube.com/embed/ooWNePIq-3c

» Lava formations in western US linked to rip in giant slab of Earth Scripps scientists propose mass melting as new force behind volcanic activity in Columbia River region
» 7000 Doctors and Scientists Accuse COVID Policy-Makers of ‘Crimes Against Humanity’
» 800 Scientists Demand The End To Global GMO “Experiment”.
» "Global markets are likely to receive fresh verbal policy signals in the week to 18 July with the chiefs of the European Central Bank (ECB), the Federal Reserve, Bank of Japan (BoJ), and the Bank of England (BoE) scheduled to speak at separate events"
» Global COVID Summit Declaration Representing 17,000 Physicians and Medical Scientists