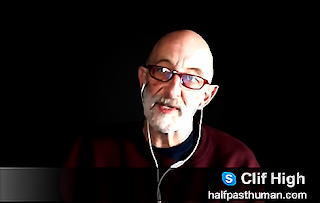 As is beyond clear to anyone with eyes that see, all levels of the government, the corporations and academia are so corrupt as to have, “Broken down any semblance of – even an homage, even a feign – to rule of law,” says Clif High.
He says one thing we have going for us is that the information our rulers use to control us comes from institutions that are themselves irredeemably corrupt and untrustworthy, thus making it difficult for them to resolve their own observational dilemmas, such as, “Should we raise rates or should we lower rates? Is Modern Monetary Theory simply crap that came out of some academic’s rectum? Or is there something to it? Can we actually do Universal Basic Income or does that kill our society in five years?” as Clif asks here.
MODERN MONETARY THEORY FOR A POST-COVID WORLD
The controlled demolition of the global financial system through COVID lockdowns and multi-trillion-dollar COVID relief bills appears to be steering us toward the Cloward-Piven Strategy to collapse the welfare system and to replace it with a system of guaranteed income, which appears to be part of a broader movement to replace Keynesian Economics with the Modern Monetary Theory.
Modern Monetary Theory (MMT) was developed at the Levy Economics Institute, a think tank affiliated with Bard College, which has the distinction of having received the most grants of any other college from George Soros. MMT has been heavily championed by Stephanie Kelton, Economic Advisor to Bernie Sanders’ 2016 presidential campaign.
Under Modern Monetary Theory, the Treasury would have an unlimited capacity to finance Social Justice programs like free college, Universal Basic Income (UBI) and Job Guarantee (JG).
Job Guarantee claims to provide a sustainable solution to the dual problems of inflation and unemployment. Its aim is to create full employment and price stability, by having the state promise to hire unemployed workers as an Employer of Last Resort (EOLR), in contrast to the debt-based model of the Federal Reserve, which is the Lender of Last Resort (LOLR). The claim is that this would protect against inflation without the social costs of unemployment and that it would potentially fulfill the dual mandate of full employment and price stability. It is sold as a “Debt-free money system controlled by the people,” and “socially-responsible money.”
There are two bills in Congress that are related to this impending transformation of the financial system. Both are still in Committee, awaiting an economic cataclysm to trigger the motions to get them passed. The first is House Resolution 2990 (HR 2990), the National Emergency Employment Defense Act of 2011, introduced by former Rep. Dennis Kucinich and the late Rep. John Conyers during the throes of the 2008 global economic crisis. The second is Senate Bill 759 (S 759), the Currency Optimization, Innovation, and National Savings Act of 2017, introduced by the late Senator John McCain.
If passed, HR 2990 and S 759 could create the legal framework for the Federal Government to do away with the “Federal” Reserve Bank and to nationalize US currency, to forgive all public and private debt – while seizing all public and private property, after a declaration of Martial Law. (Is that why there are 30,000 troops in DC?)
We already saw certain aspects of Fed avoidance and of MMT when the Trump Administration’s March 2020 $2 trillion coronavirus stimulus package enabled the Treasury to bypass the Fed with interest-free Special Purpose Vehicles issued by BlackRock, Inc. that provided Americans with unprecedented stimulus checks, rent forgiveness and other relief programs that had never previously existed.
THE POST-VACCINE COLLAPSE OF THE MAINSTREAM MEDIA
Clif says, “Our system, our box right here, the entire structure of it collapses the minute that the Mainstream Media no longer continues to feed the control words into the minds of the masses…
“Not only is the Mainstream Media crumbling under its own egregious excesses; lies, etc. but as forecast – as I said earlier in the month – we’ve now got the situation of the vax intruding. And this will drive a huge stake through the heart of the Mainstream Media…because those individuals who don’t know if they’re going to live or die from this – and what and how horrible that death might be – are going to be really, really pissed. I mean, angry beyond understanding; anger to the point of irrationality at the Mainstream Media that sold them that idea…
“It could be that out of those tens of millions of people, we might see thousands gather and burn down MSM buildings. We may see them kill Mainstream Media personalities in that process or in other attacks. We will certainly see the Mainstream Media personalities being assaulted, being taken to task for participating and selling this great horror that’s now been unleashed on all these millions of people – if it, indeed has not doomed the greater mass of humanity to death…
“In spite of the people claiming otherwise, those people that get vaxxed can have it and spread it without symptoms. That’s what Fauci lied about, back in the beginning…they were talking about the ‘asymptomatic spread’ of this, that meant that anybody might be ill; they might be spreading the virus all the time and you could actually get it and not know it and then spread it to somebody who it could kill.”