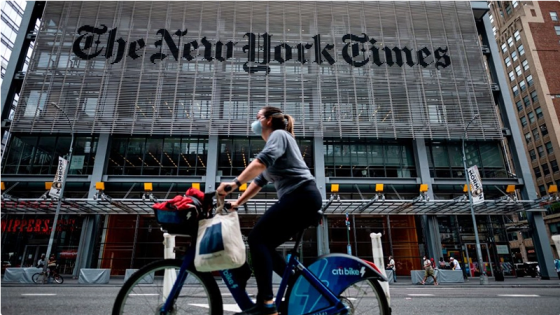 Source: Zero Hedge
A New York Supreme Court Judge last week excoriated the New York Times used “reckless disregard” and “acted with actual malice” when two of their reporters deceptively presented opinions as fact in several articles denigrating whistleblower organization Project Veritas.
What the Times did, as you’ll see below, is similar to countless hit-pieces against Zero Hedge and others; using broad, unsupported brush strokes to slander their ideological opponents. We can only hope this sets new precedent for future defamation cases.
*  *  *
As The Epoch Times’ Zachary Stieber reports in detail (emphasis ours), writers for the New York Times may have spread deceptive claims about the nonprofit journalism group Project Veritas, a judge ruled this week.
In stories from 2020 about Project Veritas videos, writers Maggie Astor and Tiffany Hsu inserted sentences that were opinions despite the articles being billed as news, New York Supreme Court Justice Charles Wood said.
“If a writer interjects an opinion in a news article (and will seek to claim legal protections as opinion) it stands to reason that the writer should have an obligation to alert the reader, including a court that may need to determine whether it is fact or opinion, that it is opinion,” Wood wrote in a 16-page decision denying the paper’s request to dismiss a lawsuit from Project Veritas.
“The Articles that are the subject of this action called the Video ‘deceptive,’ but the dictionary definitions of ‘disinformation’ and ‘deceptive’ provided by defendants’ counsel certainly apply to Astor’s and Hsu’s failure to note that they injected their opinions in news articles, as they now claim,” he added.
At issue are five articles that Project Veritas alleges contained false and defamatory information. All five were about a 2020 video report from the journalism group on alleged illegal voting practices in Minnesota.
In one of Astor’s articles, she wrote: “Mr. O’Keefe and Project Veritas have a long history of releasing manipulated or selectively edited footage purporting to show illegal conduct by Democrats and liberal groups.” The source of the statement, and whether it is fact or opinion, is not clear, according to the judge.
Hsu, meanwhile, wrote in part that conservative publications “magnified the reach of a deceptive video released last month by Project Veritas, a group run by the conservative activist James O’Keefe,” adding: “The video claimed without named sources or verifiable evidence that the campaign for Representative Ilhan Omar, a Minnesota Democrat, was collecting ballots illegally.”
“Stating that the video is ‘deceptive’ and stating ‘without verifiable evidence’ in a factual way in a news article certainly presents the statement as fact, not opinion,” Wood wrote in his decision. “Further, the Astor and Hsu Articles could be viewed as exposing Veritas to ridicule and harm to its reputation as a media source because the reader may read these news Articles, expecting facts, not opinion, and conclude that Veritas is a partisan zealot group, deceptively editing video, and presenting it as news.”
The judge said he reviewed the total context and tone of the stories and concluded a reader could believe the statements were conveying facts about Project Veritas.
The New York Times had argued that statements describing the video as “deceptive” and “false” were opinions incapable of being judged true or false.
Lawyers for the paper also argued that even if the term “deceptive” could be given objective meaning as a factual statement, writers demonstrated that the video was deceptive, citing other news outlets and so-called fact-checkers, such as Fox News and The Washington Post.
“While this is a lengthy media list, polling does not decide truth nor speak to evidence, and Defendants have not met their burden to prove that the reporting by Veritas in the Video is deceptive,” the judge said. Additionally, Veritas demonstrated in its complaint that Astor did not likely in 63 minutes digest a report from a group that alleged the video was disinformation, review news reports on Minnesota ballot issues, view the video online, obtain a comment from Alex Stamos from the Stanford Internet Observatory, write her own article, submit the article to her editors, and have it posted online.
“The facts submitted by Veritas could indicate more than standard, garden variety media bias and support a plausible inference of actual malice,” the judge wrote.
A lawyer representing the New York Times referred The Epoch Times to the paper. A spokesperson for the paper didn’t respond to a request for comment.
Project Veritas said in a statement: “This ruling means Project Veritas will now be able to put New York Times reporter Maggie Astor and New York Times executive editor Dean Baquet under oath where they will be forced to answer our questions. Project Veritas will record these depositions and expose them for the world to see.”