OUT OF MIND » THE INSANITY OF REALITY » GOVERNMENTS & THE NEW WORLD ORDER » SWAT Team Moves In As Spring Breakers Commit Violence, Destroy Restaurants 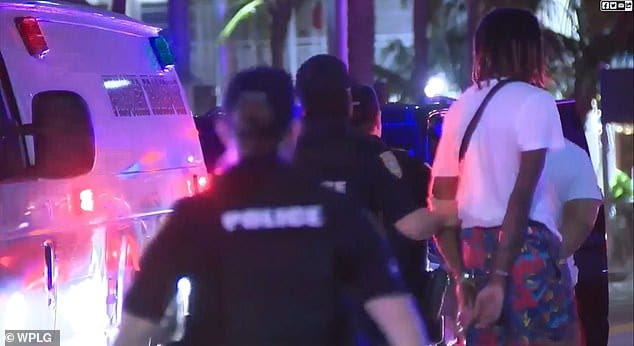 Source: Patty McMurray
SWAT Teams and several local law enforcement officers are moving in to get a massive crowd of Spring Breakers under control after they refused to abide by an 8 pm curfew set by the city of Miami as part of a state of emergency declared by Miami’s Mayor Dan Gelber. 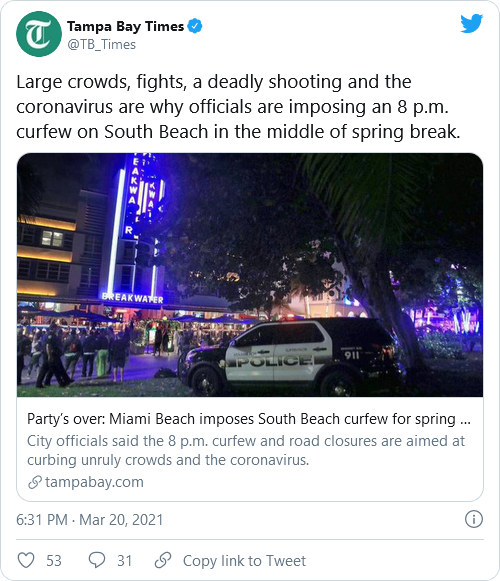 100 Percent Fed Up reports – The iconic Clevelander, a popular restaurant and bar in South Beach Miami has announced that they will be closed until at least March 24, due to the “increased violence” by Spring Breakers:

According to Local 10 – “The situation has gotten bad enough that we don’t feel comfortable asking our employees to come into work,” explains the attorney representing the Clevelander, Alexander Tachmes. He says they will meet next week to reassess the closure.
TRENDING: BREAKING: SWAT Team Moves In As Spring Breakers Commit Violence, Destroy Restaurants…City of Miami Beach Declares State of Emergency [VIDEO]
Miami Beach Police say they’re doing everything they can to keep people safe as spring breakers have caused violence and chaos along the streets of South Beach.
https://cbsloc.al/3vxEers

News of the increased police patrol comes less than a day after a street melee on Ocean Drive between Eighth and Ninth streets prompted police officers to fire pepper balls to disperse a crowd in South Beach. Officers then detained at least three people, and Miami Beach Fire Rescue personnel responded to help the few who were injured.

Videos of fights in Miami by Spring Breakers are being shared all over social media:

Several Spring Breakers have been arrested. Daily Mail reports – A SWAT vehicle was filmed moving down Ocean Drive – a popular party street – and using an LRAD, also known as a sound cannon, to get people to disperse, a video posted to Twitter shows.
The move to control the crowds followed weeks of wild partying in Miami Beach, which is no stranger to uncontrollable spring break throngs of young people.

But this year the volume is clearly higher than in previous years, said Miami Beach Mayor Dan Gelber, who’s expressed concern about the lack of coronavirus restrictions – like wearing a mask – in Florida.
‘I think it is in part due to the fact that there are very few places open elsewhere in the country, or they’re too cold, or they’re not open and they’re too cold,’ he said.

This video shows the wreckage left behind in a local restaurant by Spring Breakers:

Franco said in a live video that the crowd breaking appears to be a multi-agency effort, with helicopters from Miami-Dade police, a SWAT vehicle from Coral Gables and officers from other agencies. For the next 72 hours, visitors will have to leave streets and restaurants will close their doors at 8 pm in the main tourist areas of South Beach, the epicenter of the city’s party scene, authorities announced.
Their doors cannot open again until 6 am each morning, authorities said.
The three bridges that connect the island with mainland Miami will be closed to traffic from 10 pm. Only residents, workers, and hotel guests will have access.

OUT OF MIND » THE INSANITY OF REALITY » GOVERNMENTS & THE NEW WORLD ORDER » SWAT Team Moves In As Spring Breakers Commit Violence, Destroy Restaurants

» Mayor Charged With Attempted Murder After Shooting at SWAT Team
» Deutsche Bank Threatens US Justice Department: If you destroy our bank with your fine, it will destroy your own U.S. banking system
» The "Oathkeepers" or the "Oath-Breakers"-- You All Be the Judge by Anna Von Reitz
» 18 US Soldiers commit suicide every day on average
»  The Saga Continues -- Patrick Cody Morgan -- Stories of Corruption (Currently in Prison for Crimes He Did NOT Commit)