OUT OF MIND » CONSPIRACY THEORIES & ENDURING MYSTERIES » ILLUMINATI AGENDA & WORLD DOMINATION » Bill Gates Says Conspiracies About Him, Vaccines & 5G Are ‘Crazy’ & We Must Eat Fake Meat To Save Planet

Bill Gates Says Conspiracies About Him, Vaccines & 5G Are ‘Crazy’ & We Must Eat Fake Meat To Save Planet 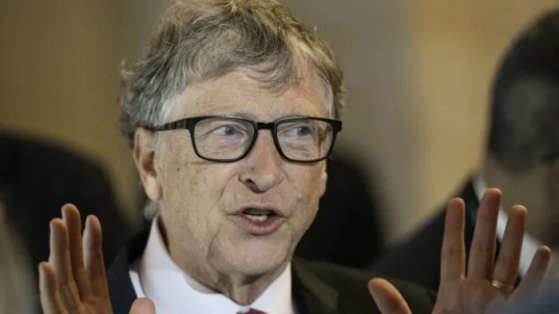 Source: Niamh Harris
During an ‘Ask Me Anything’ session on Reddit, billionaire philanthropist Bill Gates has again dismissed as “crazy” the so called conspiracy theories about himself, 5G and the coronavirus vaccines.
Gates, who has invested in a new kind of lab grown meat, also took the opportunity to promote the virtues of synthetic meat as well as his new book about climate change.
RT reports: Gates fielded questions from Redditors during the online Q&A on Friday, doing his best to hawk his latest volume on climate change in the process. However, it didn’t take long before netizens pressed him on conspiracy-minded allegations that he is involved in a shadowy plot to implant microchips in unwitting vaccine recipients.
“I am innocent!” Gates protested, adding “The whole thing about 5G and microchips is pretty crazy. Why would I want to do that?”
Gates later said “fake news” and “disinformation” online is a “huge issue,” observing that “Some false information is more interesting than the truth so digital channels seem to magnify echo chambers with bad facts.”

The billionaire also took the opportunity to extol the virtues of synthetic meat, promoting it in several different replies as a “green product” and a way to reduce one’s “carbon footprint.” He has repeatedly hailed artificial meats in the past, recently suggesting that “all rich countries” ought to move to “100-percent synthetic beef.”
“You can get used to the taste difference,” Gates told an interviewer last month, in a slightly off-putting endorsement.
Addressing a question about population growth and its effect on climate change – another area where theories about Gates run rampant – the former Microsoft exec said that “fortunately,” growth slows “when countries improve health and get to middle income levels.”
“So we should help moderate population growth with aid for health, education and good governance,” he went on, forecasting that the world population would peak at 10 billion so long as world powers are “generous to the poorest countries.”
He later hinted at apocalyptic consequences if climate change is not tackled, saying “We won’t be able to support a large population if it gets a lot warmer” while predicting an massive outflow of migration from areas made “unlivable” by the rising temperatures.

OUT OF MIND » CONSPIRACY THEORIES & ENDURING MYSTERIES » ILLUMINATI AGENDA & WORLD DOMINATION » Bill Gates Says Conspiracies About Him, Vaccines & 5G Are ‘Crazy’ & We Must Eat Fake Meat To Save Planet

» Oregon Bill To Ban Meat From Prisons, Medical, Nursing Facilities & Replace With Fake Meat
» Robert F. Kennedy Jr: ‘Bill Gates Couldn’t Even Save Windows From Viruses’- He Needs To ‘Sit Down’
» Bill Gates Has Solution for Polio Caused by Vaccines
» Bill Gates Outspends U.S. Government and Provides $18 BILLION to WHO for COVID Vaccines
» JUST IN CASE YOU DID NOT CATCH THIS: Bill Gates says Reduce Population with vaccines