OUT OF MIND » THE INSANITY OF REALITY » GOVERNMENTS & THE NEW WORLD ORDER » Fulton County, GA Internal Election Emails Show Most Poll Workers Sent Home Late, Except For Ruby And Her Overnight ‘Counters’ 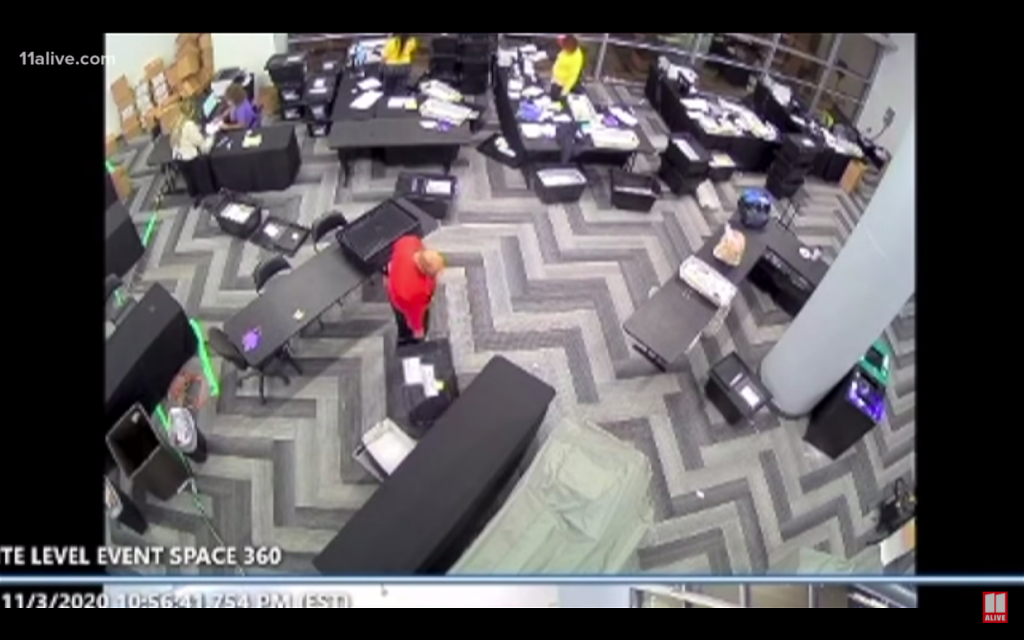 Source: CD Media Staff
John Solomon’s Just The News has obtained emails and affidavits from Fulton County, GA from Nov 3rd of last year during the 2020 U.S. general election that show county poll officials ordered everyone home (including GOP monitors) while a small team remained behind scanning ballots. Surveillance video from State Farm Arena appear to show workers pulling ballots from under tables and scanning the same ballots multiple times during the night.
News reports stated that over 100,000 ballots were scanned without GOP monitors present during the night.
Two separate sworn affidavits from Election Night poll workers claimed that, at roughly 10:30 p.m. on Nov. 3, an official directed workers to stop working and to return the next day at 8:30 a.m.
Nearly half a dozen local and national media outlets, meanwhile, reported being told that absentee ballot-counting had ceased at around 10:30 p.m. and would resume the next day. Several reports cited county spokeswoman Regina Waller for that information.
Counting at the State Farm Arena, however, continued past 10:30 p.m. after most staffers had left. In December, Waller told Just the News that, contrary to the numerous media reports, she had “stated to all media … that although several workers were released to go home, a small team remained behind to assist with scanning ballots.”
It is unclear why no media outlets appear to have mentioned that fact.
In the email, timestamped at 10:22 p.m. on Nov. 3 and addressed to several county officials as well as State Farm Arena spokesman Garin Narain, Waller wrote: “The workers in the Absentee Ballot Processing area will get started again at 8 am tomorrow.” Waller goes on to request arrangements for news crews hoping to get live shots of the counting the following day. ‘


You can read more about the information obtained by Just The News here.
VoterGA.org has a pending lawsuit for ballot inspection and audit of the 2020 ballots in Fulton County. There is a hearing this week in this case to decide procedures for the audit. CDMedia will report on that event as it happens.
GA Secretary of State Brad Raffensperger has refused to investigate the obvious criminal activity in Fulton County during the election. In fact, Raffensperger’s office was just caught lying at the transcript of a call with President Trump to hurt him with public opinion post-election, then attempting to destroy the evidence by deleting the audio file.
Corruption of the political process in GA’s capitol Atlanta appears deep and involves both parties, who seem to have colluded to remove President Trump from his legitimately-elected office for a second term.

OUT OF MIND » THE INSANITY OF REALITY » GOVERNMENTS & THE NEW WORLD ORDER » Fulton County, GA Internal Election Emails Show Most Poll Workers Sent Home Late, Except For Ruby And Her Overnight ‘Counters’

» Poll Which Correctly Called 2016 Election Sees Another “Shocking” Outcome In November
» Jovan Pulitzer says Georgia Called in Trucks to Get Rid of the Evidence in Fulton County He is Supposed to be Scanning!
» HUGE BREAKING NEWS IN GEORGIA – 132,000 Ballots in Fulton County, Georgia Have Been Identified Which Are Likely Ineligible
»  VIDEO: NH poll workers shown handing out ballots in dead peoples’ names
» Maricopa County Audit Workers Released from NDA…Here Is Their Truth Video